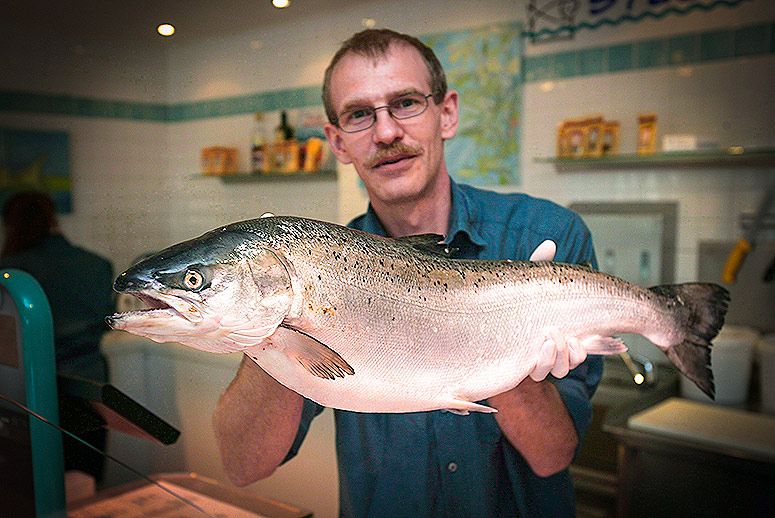 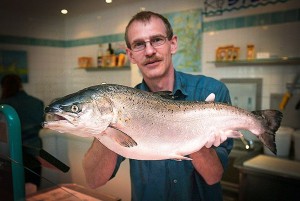 When it comes to seafood, shrimp is the only variety Americans eat more of than salmon. Following an announcement made today by the Food and Drug Administration, some of that salmon we so enjoy may soon be the first genetically modified animal protein to be commercially sold and consumed in the United States.

After a decades-long regulatory ordeal, the fast-growing fish, developed by AquaBounty Technologies, was declared safe for human consumption, as was the bit of added DNA (which the FDA classifies as a drug in this case) that speeds up the salmon’s growth. The salmon will not be required to bear a label declaring that it has been genetically modified and is only approved for production in two contained, land-based hatchery facilities, in Canada and Panama. AquaBounty did not say whether the fish will be sold under its brand name but did say that “it is too early to discuss commercialization plans, but there are several paths to market that are being considered.”

While it will be some time before it’s clear whether genetically engineered salmon will take off in the same way GMO crops such as corn and soy have, despite decades of consumer protest, it is clear that there’s huge demand for farmed salmon. Between 2000 and 2004, according to research published by the World Wildlife Fund, Americans consumed an average of 180,000 metric tons of Atlantic salmon, and 99 percent of that was farmed. In contrast, 99,000 metric tons of wild salmon were consumed, of both Atlantic and Pacific species. This helps to explain why a faster-growing fish, such as the AquAdvantage salmon, would tempt the aquaculture industry: Speeding up the farming process would not only shorten the time it takes a fish to go to market but reduce feed costs and other overhead as well.

The problem is, no one seems interested in eating it: More than 1.8 million people filed public comments with the FDA asking for the fish not to be approved, and more than 60 retail chains, including Whole Foods and Target, representing some 9,000 grocery stores across the country, have said they will not sell GMO salmon, according to the environmental group Friends of the Earth.

As with other genetically engineered foods, there is no credible science that suggests consuming genetically engineered salmon would present a risk to human health. There has been, however, significant concern that the faster-growing fish could crossbreed with wild salmon species, diluting and perverting an already shrinking gene pool. The narrow approval AquaBounty earned for producing the fish has eased some of that concern.

“I’ve never had any real concerns about the safety of these genetically engineered salmon as a food source. I see no reason to worry about human health effects, and apparently neither does the FDA,” J. Andrew DeWoody, a professor of genetics at Purdue University who studies fisheries management, said in a statement. “However, I’ve always had concerns about the potential environmental effects should these G.E. fish escape into the wild because of their potential impact on native gene pools. That said, I was pleased to learn that the G.E. fish will be sterile, landlocked, and surrounded by multiple physical barriers.”

“The decision to approve GMO salmon without a mandatory disclosure is yet another example of how FDA’s outdated policy keeps consumers in the dark,” Scott Faber, the executive director of Just Label It, said in a statement. “Consumers will have no way of knowing whether the salmon they are buying comes from nature or comes from a lab. It makes sense to give consumers the right to know and to choose whether this fish, or any other food that contains GMO ingredients, is right for their dinner table.”

One thought on “For the First Time Ever, the FDA Will Allow a GMO Animal to Be Sold in the U.S.”