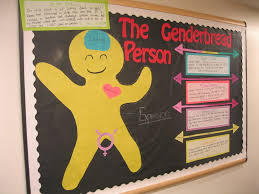 A Brisbane high school is teaching a resource banned in NSW. Photo: Supplied

Students at one Brisbane high school are learning more than just the birds and the bees.

Queensland’s educational department says it won’t move to stop a high school in the northern suburbs of Brisbane using a banned educational resource which encourages students to think of gender as a spectrum rather than a strictly defined binary.

It has been revealed that Mitchelton State High School has recently introduced a radical new educational resource on ‘gender theory’ as part of its health studies curriculum.

In the radical resource, students are taught about gender identity with the “Genderbread Person” – a play on the name of the holiday cookie – to teach them on how to identify themselves as either, “agender,” “bigender,” and “two spirit” to name a few.

The program was developed by author Sam Killermann, who has written numerous books on the subject for distribution throughout schools, spreading through the United States to be included heavily in the curriculums of states such as California.

The underlying concepts of programs like this stem from shot topics in social discussions in society, including the recent explosion of gender dysphoria studies and behaviours.

A diagram of the ‘Genderbread Person’. Photo: IPMS.

The resource, which features a gingerbread figure as a mascot, teaches students about current theories of gender as not just divided into “man” and “woman” but having several variations.

It also teaches the difference between biological sex and gender identity.

This follows the introduction of the ‘Safe Schools’ program in Victoria in 2013, when the Labor government provided $8 million in funding to almost 500 schools with more than 15,000 teachers are involved.

Extreme backlash in NSW led to a written directive from Education Minister, Rob Stokes to ban the teaching of gender theory in NSW schools in 2017, however educational resources still continue to steer teachers to websites that expose children to the ‘fluidity of gender’.

The NESA developed resource, “Teacher Toolkit: Prevention of Domestic Violence”, tells children that the “social construction” of gendered stereotypes presents a “narrow view” of what it is to be masculine and feminine.

The ‘Genderbread Person’ was also used in schools as part of NSW’s Crossroads program but was canned last year.

Related: The need for traditional nationalism against cultural marxism in Australia

The program has since also even being introduced under the veil of secrecy in the Northern Territory.

The gender dysphoria lobby has spread so much in to mainstream society that now children with gender dysphoria no longer have to seek court approval to undergo ‘transition’ surgery – with the ABC receiving over $1 billion each year to publish feature pieces promoting the case to ‘remove gendered language’.

This is all despite concerns with characters spearheading the gender theory concepts:

Along with local area groups in Brisbane, some parents are irate that their children’s sex education class is being incorporated with ‘Safe Schools’ gender theory without their prior knowledge.

They have also expressed concern over the methods and materials being used, including a checklist that asks students if they are “ready for sex” and another worksheet that describes how to give and obtain consent.

From the program in the United States:

“Gender is one of those things everyone thinks they understand, but most people don’t.

A department spokesperson said Mitchelton High parents were given the choice to opt their children out of studying that curriculum at the start of term:

“Mitchelton State High School uses the Genderbread Person resource as one small component of Resilient Individuals who Strive for Excellence (RISE), a program that focuses on student wellbeing, including social and emotional learning,” the spokesperson said in a statement.

Programs like this assist schools in cultivating a supportive and inclusive culture for students.”

The department gives individual schools leeway to decide what resources are used to teach students about gender identity, but didn’t keep information about which resources were being used, or whether the ‘Genderbread Person’ was being taught at any other schools in Queensland.

A number of parents are expected to come out in force to a public meeting in the coming weeks to demand that their concerns be addressed.

Controversial Genderbread Person tool that teaches teenagers how to identify as ‘genderqueer’ is being used in Queensland schools: dailymail.co.uk

No stop to gender education at QLD school: news.com.au

Parents angry after school tells 13-year-olds they can have sex, choose gender: foxnews.com