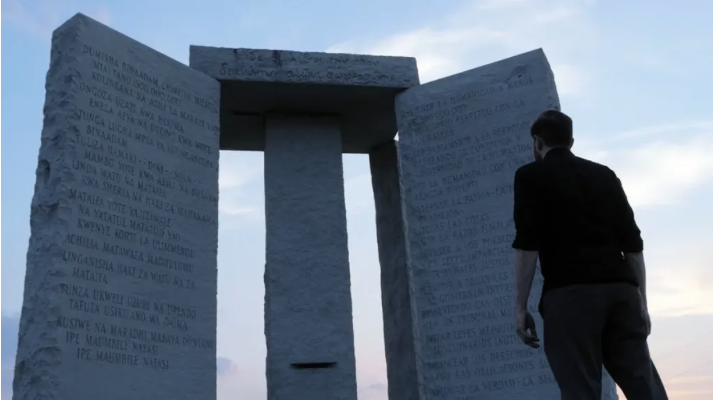 The Georgia Bureau of Investigation have confirmed the Georgia Guidestones monument has been damaged by an explosive device overnight.

Pictures and drone footage show one of the four stone panels in rubble on the ground:

The enigmatic attraction was built in 1980 from local granite, commissioned by an unknown person or group under the name ‘R.C. Christian’.

The 19-foot-high (6-meter-high) panels bear a 10-part message in eight different languages with guidance for living in an “age of reason.”

One part calls for keeping world population at 500 million or below, while another calls to “guide reproduction wisely — improving fitness and diversity.”

It also serves as a sundial and astronomical calendar.

GBI says the bomb appears to have gone off around 4 a.m., with sheriff’s deputies responding to discover the damage. Some residents told local news outlets they heard an explosion at that time.

Elbert County sheriff’s deputies, Elberton police and the Georgia Bureau of Investigation were among agencies trying to figure out what happened.

The roadside attraction received renewed attention during Georgia’s May 24 gubernatorial primary when third-place Republican candidate, Kandiss Taylor, claimed the guidestones are satanic and made demolishing them part of her platform.

The site is about 7 miles (11 kilometers) north of Elberton, near the South Carolina state line. Granite quarrying is a top local industry.

The monument had previously been vandalised.