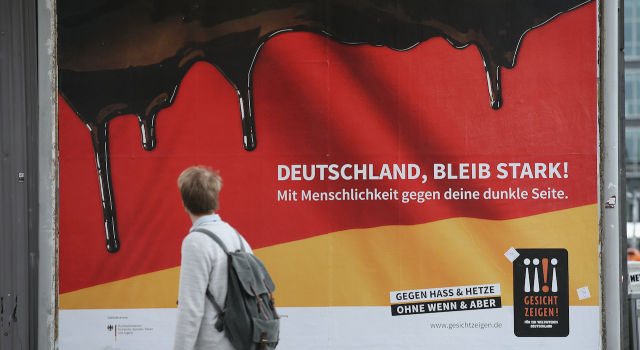 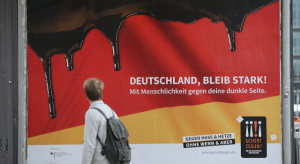 Germany have begun an aggressive advertising campaign urging citizens to overcome their supposed “dark side” and embrace the current migrant crisis engulfing Europe.

The propaganda billboards say, “Germany, stay strong! With humanity towards your dark side” and “Against Hate & baiting – no ifs or buts”.

The text is written over a German flag dripping with black paint. Organisers say they hope to “retrieve” the flag from “right wing” and “nationalist” groups such as the PEGIDA and the Eurosceptic Alternative for Germany (AfD), represented on the poster by the encroaching black paint.

Six hundred such giant billboard adverts are expected to go up, and 20,000 stickers and 45,000 postcards will be distributed in the campaign, which is backed by Germany’s Ministry for Families, Seniors, Women and Youth.

“PEGIDA and Co. abuse the flag of the Federal Republic,” proclaimed Uwe-Karsten Heye, the chairman of the group at the campaign launch. “Indeed the flag and Constitution stand for an open society, the right to asylum and for inviolable human dignity”, he claimed.

“I think it is necessary to give people courage to stand against right-wing extremism and xenophobia,” Mr. Heye added, talking to Der Tagesspeigel.

The organisation’s manager, Sophia Oppermann, said that they also wished to encourage left wing and “humanitarian” groups to use and display the national flag more often.

“We’re tired with the right constantly waving the German flag, and all the others have no chance,” she said. “We are also proud of this country and we stand for the values that have this flag and this country.”

Specifically, the group wants the German public to embrace the 1.5 million migrants who arrived in Germany in 2015, and to keep welcoming them this year as Chancellor Merkel’s open door policy continues unabated.

“We must continue to act with humanity and we must insist that we are dealing with individuals, individuals, have to do”, Ms. Oppermann said.

She argued that the majority of migrants were refugees seeking protection, but admitted there are “huge problems” associated with the mass influx from the Middle East.

“You have to develop ideas on how you can do that”, she said. Adding: “People will, together we hope, strengthen the great majority of society”.