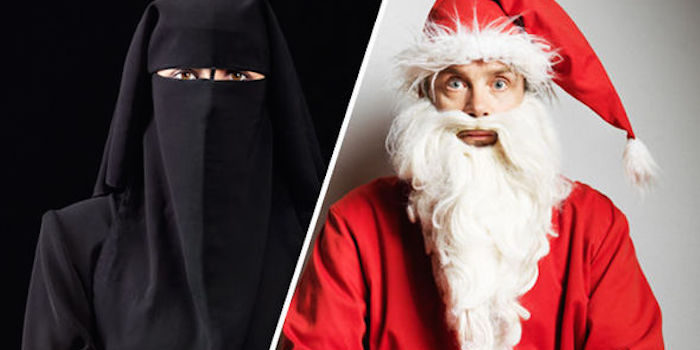 German interior minister Ralf Jäger has warned that if a French-style Burqa ban is enacted in Germany, then the country will have to also ban Santa Claus in the interests of “fairness”.

The left wing politician rejected the rationale for banning the Islamist garment, and said it was purely motivated by right-wing parties trying to shore up their poll positions. Speaking on Bavarian radio, Jäger said: “A burqa ban brings no security, but [is driven] only by election campaigns in some [German] states”,reports Focus.

Continuing his point, the minister said that if the German state was going to ban the burqa, it would have to ban “people that dress up as Santa Claus” as well. It may be that the popular Christmas-time costume’s bushy white beard would offend, in Mr. Jäger’s view, any prohibition against religious face coverings.

Mr. Jäger made it clear he was against the ban in any case. While he told radio he believed the wearing of the burqa by Muslim women was a “sign” that their community displayed a “lack of integration” into German community, he disagreed that the burqa was a security risk.

Breitbart London has reported at length on NRW interior minister Jäger, who was fast to pin the responsibility for the Cologne New Year’s Eve sex attacks — which saw over 1,000people molested, raped, assaulted, and robbed — onto police.

The interior minister fired the chief of Cologne police, forcing him to take early retirement, in a move he said was to restore public faith in city policing. However, it was later revealed that police chief Wolfgang Albers had foreseen trouble for the night, and had appealed directly to Jäger’s Interior ministry for extra officers to help patrol the city.
That request was turned down.

Further revelations from a leaked cache of confidential emails between the state government and local police showed how the Interior ministry had attempted to cover up the attacks. One message showed “a request from the ministry” that police reports were to “cancel” the use of the word “rape” when dealing with the events.