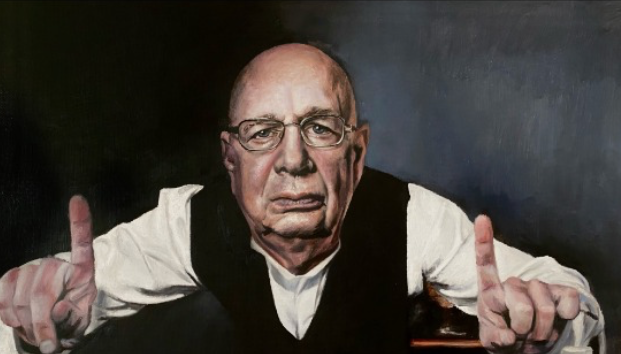 READ MORE AT THIS IS EUROPA

EUROPE RENAISSANCE is blocked by Facebook: Be a part of the solution by helping us to inform and inspire others. For bank-to-bank support details contact Michael Walsh euroman_uk@yahoo.co.uk

I can verify that this photo going around of Schwab with a statue of Lenin on his bookshelf is genuine. He really does have that in his office. This is based upon first-hand knowledge, not speculation or rumour.

Let me explain something very important for those who do not know their Russian history. Following the 1917 October ‘Revolution’ US-sponsored regime change), the Bolsheviks/Communists relied upon the dogmas of Marx and Engels to create a new world of ‘equality’.

They too preached that they would change all the existing ways and customs far beyond politics and economics. They attacked human nature, as the left is doing once again. Suddenly, the very notion of human morality that formed the very foundations of a healthy society was to be forever altered.

Churches were seized, and religion was abolished. Everything that was the foundation of humanity that we call conservatism today was attacked by the Communists in Russia.

This today is unfolding with the WOKE mobs in the West. The Communists’ goal was to destroy the very fabric that binds society together to ensure that the people would remain as individuals and afraid to ban together to overthrow the government.

They indeed destroyed the age-old moral values of people. You no longer smiled and said hello when passing a stranger. Religion had to be abolished, for you were to only trust in the government. God was rendered nothing more than a superhero in a comic book.

They drove a wedge between friends and all social relations between people, including the complete rejection of family. Children were taught the State was their real parent, and if their biological parents ever spoke against the State, they were to turn them in. They turned parents against their own children looking at them as a government informant. All this was proclaimed by Lenin to be ‘progress’ for the advancement of society and the State.

Lenin indoctrinated his leading feminist lieutenant, Alexandra Kollontai (1872-1952), who became the first female commissar in the Soviet government. They took what the suffragettes were fighting for in the West as equal rights, and included that as part of the communist manifesto.

They equated marriage to slavery to divide even husband and wife, not just the children against the parents. Lenin, Schwab’s hero, waged an all-out war on ‘old and outdated’ institutions like marriage and family, elevating the State as the dominant role.

Instead of marriage, there would be more disposable ‘unions of affection and comradeship.’ Lenin launched the ‘liberation’ of the family and made divorce a natural step. Abortion on demand was brought in during 1920.

Alexandra Kollontai actually wrote: ’The family is ceasing to be necessary either to its members or to the nation.’ Capitalists, she said, ‘are well aware that the old type of family, where a woman is a slave and where the husband is responsible for the well-being of his wife and children, is the best weapon in the struggle to stifle the desire of the working class for freedom and to weaken the revolutionary spirit of the working man and working woman.’

The Bolsheviks insisted that women would have the right to vote, but that was meaningless when they eliminated all opposition and imposed the one-party rule.

FREEDOM LOVERS HELP US WITH A SIMPLE BANK TRANSFER TO OUR ACCOUNT euroman_uk@yahoo.co.uk or keyboardcosmetics@gmail.com

The liberation and equality of women’s right to equal wages became a joke for capitalism is based upon your freedom to pick your profession, whereas, under communism, individualism is ignored. Women were quickly ghettoized into state-chosen professions; their wages went down with the freedom to decide their own futures.

Donate: It is the generosity of our supporters and members that makes our vital work possible. As the storm clouds of crisis and the pain of injustice and persecution loom over our people, the potential and importance of our work grows day-by-day. There is no George Soros figure out there for nationalists, so we can only do what good people like you help us to do. Thank you for your faith and your generous commitment: contact Michael Walsh euroman_uk@yahoo.co.uk

2 thoughts on “Guess who inspires the disgusting reviled Klaus Schwab”