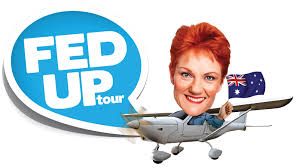 This morning, Queensland Senate Candidate, Pauline Hanson, announced her ‘Fed Up’ campaign tour as she touched down at Caloundra Airport, in her new Australian made Jabiru plane.

“As I have travelled around the country, people are telling me they are fed up with losing the farming sector, they’re fed up with foreign ownership of our land and prime agricultural land, they’re fed up with the threat of terrorism in our country and the free trade agreements that have been signed, which are not in our best interest, and foreign workers coming in to Australia…so hence, the ‘Fed Up’ tour. This is the feedback I am getting from Australians and that’s why I think it is important to get to meet and talk to as many people as I possibly can because I want to represent them on the floor of Parliament.”

In Queensland, Ms. Hanson plans to visit as far north as the Cape York Peninsular where she has been invited to visit Aboriginal elders; she is also planning on visiting the Mount Isa Rodeo and Birdsville Races.

“We are touring through Queensland mainly, because I am standing for the Senate in the next Federal Election, but also to New South Wales and getting around the country to meet people in remote areas and to let them know I am out there. I am going to visit areas where they feel forgotten by their local representatives.”

Hanson’s first official flight, and destination on her ‘Fed Up’ tour, will be to Rockhampton on Friday morning, ahead of the Reclaim Australia Rally to be held on Sunday in the town’s Central Park. Her ‘Pauline Hanson’s One Nation – Fed Up Tour’ branded plane will take off at 6:30am from Caloundra Airport and land at 9:30am in the General Aviation wing of Rockhampton Airport. Media and public are welcome to attend.

“The Reclaim Australia Rally is people like myself saying to our politicians ‘I’m sick and tired of where you have us headed’. This is about us saying ‘listen to us’ they’re obviously not…. It is about being an Australian, being proud of who you are and to maintain our culture, way of life and laws.