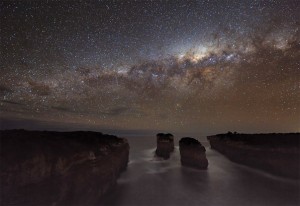 WORRIED about who’ll be voted off X-Factor tomorrow night? Of course you are. Concerned that Fox News probably isn’t “fair and balanced”, or that Romney might just turn out to be a weaselly corporate scumbag, like every other recent US president? Does the Baby Jesus still provide succor; will you ever get down to 200lbs; did you miss that Walmart promotion? Do you lie awake at night and worry about these and other important issues in your life… in this big, bad world..?

Then this video is for you…

Statistics: Our galaxy, the Milky Way, is 100,000–120,000 light-years in diameter and contains 200–400 billion stars. The Galaxy is estimated to contain at least as many planets, 10 billion of which could be located in the habitable zone of their parent star. There are something like 1011 to 1012 stars in our galaxy, and there are perhaps something like 1011 or 1012 galaxies.

—and God just created this one… in six days?

One thought on “Hello? The Bigger Picture”