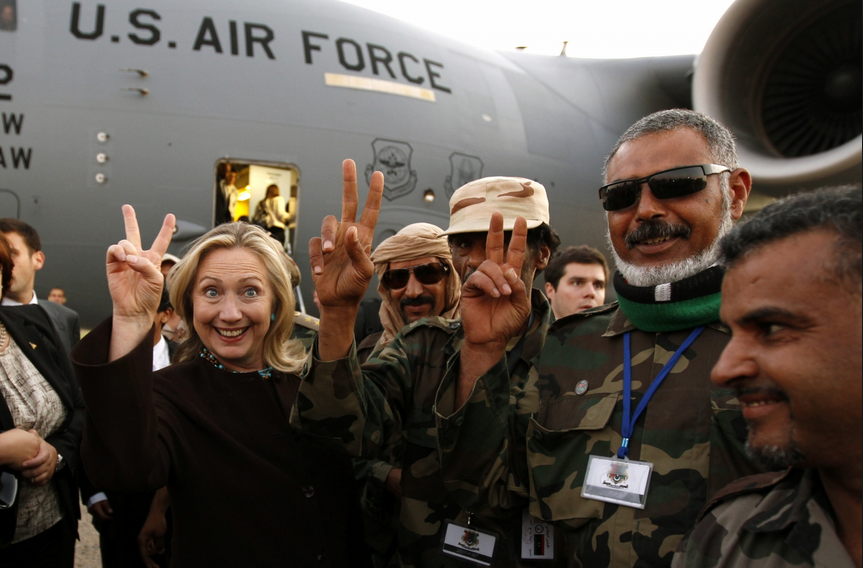 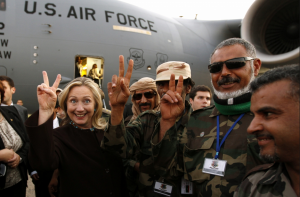 Picking up where the Benghazi scandal left off, it cannot be stated often enough that Hillary Clinton, in her tenure as Secretary of State, was instrumental in helping to fund, organize, train, and direct al-Qaeda terrorist forces in Libya and Syria.

In regards to Libya, it was well known and even criticized by Libyan officials that Clinton’s State Department was actively funneling weaponry to “rebels” with “ties to al-Qaeda.” Of course, the “rebels” actually were al-Qaeda as the Libyan “rebellion” itself was nothing more than the use of proxy forces by the United States and NATO whose ranks were made up of terrorists, jihadists, and mercenaries. As the Washington Times reported in February, 2015

Libyan officials were deeply concerned in 2011, as Secretary of State Hillary Rodham Clinton was trying to remove Moammar Gadhafi from power, that weapons were being funneled to NATO-backed rebels with ties to al Qaeda, fearing that well-armed insurgents could create a safe haven for terrorists, according to secret intelligence reports obtained by The Washington Times.

The reports included a 16-page list of weapons that Libyans supposedly tracked to the rebels from Western sources or their allies in the region. The memos were corroborated by a U.S. intelligence asset familiar with the documents as well as former top Gadhafi regime official Mohammed Ismael.

“NATO has given permission to a number of weapons-loaded aircraft to land at Benghazi airport and some Tunisian airports,” the intelligence report said, identifying masses of weapons including tanks and surface-to-air missiles.

That report, which was prepared in English so it could be passed by a U.S. intelligence asset to key members of Congress, identified specific air and sea shipments observed by Libyan intelligence moving weapons to the rebels trying to unseat the Gadhafi regime.

“There is a close link between al Qaeda, Jihadi organizations, and the opposition in Libya,” the report warned.[1]

Elliot Jager of NewsMax also points out Clinton’s treachery in the funding and support of jihadists in Libya when he writes that Clinton was one of the principal officials who promoted the idea of supporting terrorists in the African country. Jager states,

Then Secretary of State Hillary Clinton became the prime mover in the decision by the Obama administration to back anti-Gadhafi insurgents, The New York Times reported in 2011.[3]

Clinton, along with Samantha Power, then at the National Security Council, and Susan Rice, the U.N. ambassador at the time, convinced Obama to back the rebels.

Yet even after the disaster in Libya, Hillary did not learn her lesson. She also promoted the idea of assisting the “rebels” in Syria, who were wholly conceived and controlled by NATO and the United States to begin with. Indeed, she actively participated in the act of doing so.[4]

In fact, even after it became clear to the world that the fighters known to the general public as “rebels” were actually terrorists and jihadists, she continued to publicly lobby to support them, even criticizing Obama for not doing enough to train, fund, arm, and direct them.

Obviously, the idea that Clinton was unaware of the jihadist nature of the fighters in Syria is absurd. Of course she knew. Any informed observer knew. Clinton was simply one more State Department official in a whole collection of American and Western officials who were involved in the support, funding, and directing of al-Qaeda and “ISIS” fighters in Syria for the purposes of destroying the secular government of Bashar al-Assad.

This alone is reason enough that Hillary Clinton should never be allowed to hold the office of the Presidency.