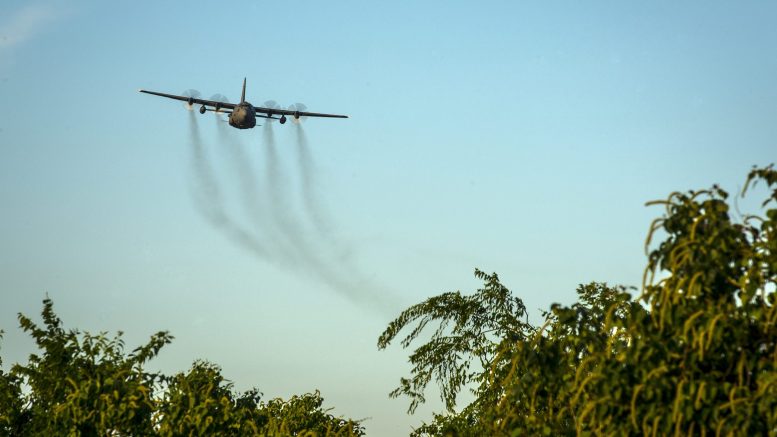 On Thursday night over 600,000 acres of Houston will be sprayed with controversial chemicals with the potential to kill millions of bees and potentially harm the local population.

Houston area health officials are working with the U.S. Air Force to conduct an aerial spraying operation on Thursday night in an attempt to fight a possible influx of disease-carrying mosquitoes following flooding from Hurricane Harvey. However, residents fear the spraying of the chemical known as Dibrom, or Naled, may cause unintended health consequences. The Air Force will be flying modified C-130 cargo planes out of Kelly Air Force Base in San Antonio in an operation which may take more than one day.

According to a press release from the Harris County Public Health department:

The insecticide, Dibrom (EPA-approved), is routinely used for aerial spray operations to combat mosquito-borne disease and will be used during the spray operation in Harris County. Dibrom is considered safe for the environment and is applied by licensed applicators, according to the label instructions.

The majority of spraying will take place in the northern and southern Harris County. Although the HCPH says Dibrom is considered safe for the environment, a recent study has caused concern over the potential health effects on babies. Researchers with the University of Michigan found that 9-month-old babies in China who had the highest prenatal exposure to Dibrom scored 3 to 4% lower on motor skills tests, including small movements of hands, fingers, face, mouth and feet, when compared to children with the lowest exposure. In addition, in 2012 the European Commission concluded that “type 18 biocidal products containing naled pose a potential and unacceptable risk to human health and the environment.”

What do Houston’s health officials recommend to Houstonians concerned about exposure? Stay inside.

For residents concerned about exposure during the aerial spray operation, HCPH recommends individuals stay indoors during the evening aerial application in the treated areas, as a precaution.

The statement goes on to say that beekeepers “may wish to cover their colonies to prevent bees from exiting during treatment.”  The reason the HCPH makes this recommendation could be due to previous deaths of millions of bees as a result of spraying Dibrom.

In late August 2016, officials in Dorchester County, South Carolina conducted a similar aerial spraying operation to fight mosquitoes who might be carrying the Zika and West Nile viruses. The following day residents woke up to millions of dead honey bees.

“My bee yard looks like it’s been nuked,” Juanita Stanley, co-owner of Flowertown Bee Farm and Supply told the Post and Courier. Stanley estimated she lost roughly 2.5 million bees in 46 different hives on her farm.

The Houston Audubon organization released a statement regarding their concerns about aerial spraying of insecticides Permethrin and Dibrom in southeast Texas and southwest Louisiana.

The two insecticides to be used each pose risks to people, and all animals who inhabit the large, sensitive wetlands and aquatic ecosystems that would be affected by massive spraying from airplanes.

Specifically, the Houston Audubon says fish toxicity is a risk from both chemicals as is the risk of inhalation and ingestion by birds and humans. “The unwise and destructive aerial spraying of Permethrin and Dibrom have not been shown to be very effective, and are aimed at solving a temporary problem, while causing long-term negative effects on people and wildlife.”

Unfortunately, it seems as if the spraying will go on as scheduled. This is yet another example of politicians and bureaucrats using the population as their own experiment. They make decisions which have the potential to affect the health of the environment, the animals, and the human population of Houston without consulting the people of Houston.