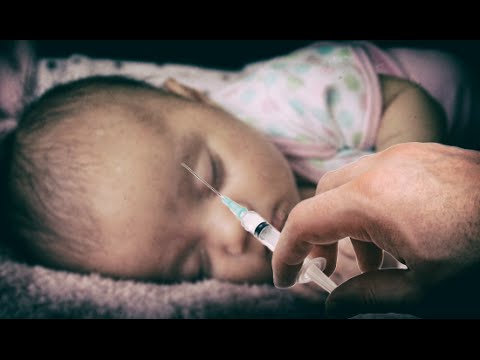 If you want to be sure your pediatrician has your child’s best interest, this is mandatory reading. Pediatricians around the country have begun refusing to accept families who opt out of some or all vaccines. Thanks to a tip sent to Wellness & Equality by a reader, now we know why.

When my friend’s child suffered a life-threatening reaction to a vaccine a week before her first birthday, my friend assumed her pediatrician would write her a medical exemption from future vaccines. Shortly after receiving a routine set of vaccines, the happy, vibrant one-year-old spiked a 106 degree fever, began having seizures, and was hospitalized. When the unexplained “illness” passed after a week in the hospital, the little girl had lost her ability to walk. My friend describes how her daughter, who had learned to walk several months earlier at 9 months, suddenly “stumbled around like a drunk person” for weeks following the vaccines. My friend met with a team of pediatricians, neurologists, and naturopathic doctors, and they agreed: Her daughter had suffered a brain injury caused by a reaction to one of the vaccines. Hoping the injury would be temporary and that she might recover and ease her brain inflammation if they could help her small body quickly eliminate the vaccine additives that caused the reaction, my friend’s daughter underwent an intensive detoxification program overseen by a nutritionalist. Slowly, her daughter relearned to walk.

My friend is a practicing attorney who graduated from a Top 10 college. The evidence was overwhelming that her daughter’s reaction had been caused by vaccines, she told me.

But a few months later, when she took her daughter back into the pediatrician for a visit, he wanted to vaccinate her daughter again. She was baffled. Why?

After a reader sent us a link to a PDF file of Blue Cross Blue Shield’s Physician Incentive Program available online, Wellness & Equality learned that insurance companies pay pediatricians massive bonuses based on the percentage of children who are fully vaccinated by age 2. 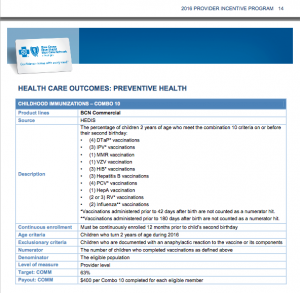 So how much money do doctors really make from vaccines? The average American pediatrician has 1546 patients, though some pediatricians see many more. The vast majority of those patients are very young, perhaps because children transition to a family physician or stop visiting the doctor at all as they grow up. As they table above explains, Blue Cross Blue Shield pays pediatricians $400 per fully vaccinated child. If your pediatrician has just 100 fully-vaccinated patients turning 2 this year, that’s $40,000. Yes, Blue Cross Blue Shield pays your doctor a $40,000 bonus for fully vaccinating 100 patients under the age of 2. If your doctor manages to fully vaccinate 200 patients, that bonus jumps to $80,000.

But here’s the catch: Under Blue Cross Blue Shield’s rules, pediatricians lose the whole bonus unless at least 63% of patients are fully vaccinated, and that includes the flu vaccine. So it’s not just $400 on your child’s head–it could be the whole bonus. To your doctor, your decision to vaccinate your child might be worth $40,000, or much more, depending on the size of his or her practice.

If your pediatrician recommends that your child under the age of 2 receive the flu vaccine–even though the flu vaccine has never been studied in very young children and evidence suggests that the flu vaccine actually weakens a person’s immune system over the long term–ask yourself:  Is my doctor more concerned with selling me vaccines to keep my child healthy or to send his child to private school?