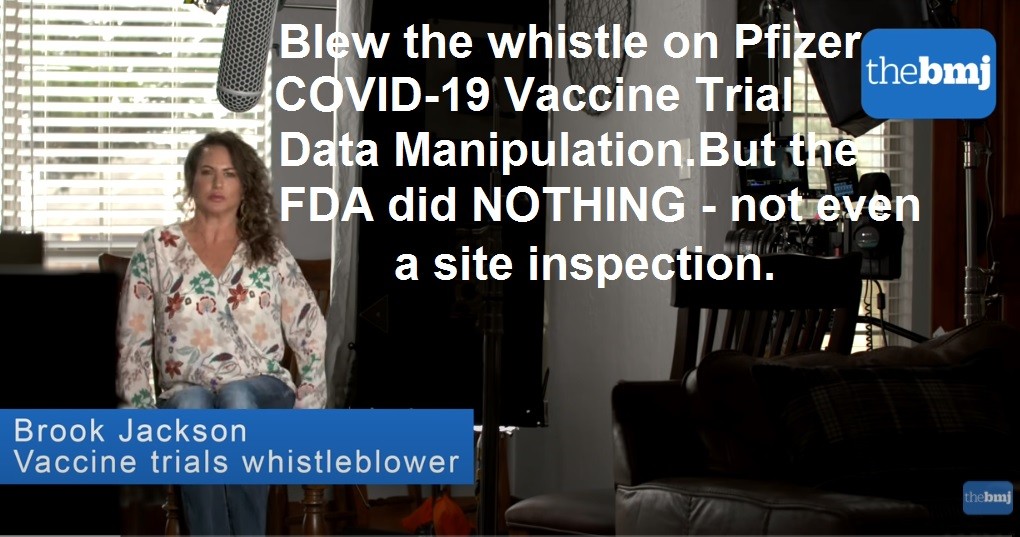 The British Medical Journal (BMJ) has released a video of whistleblower Brook Jackson, who was a regional director employed by Ventavia Research Group in Texas in 2020 to monitor the Pfizer COVID-19 vaccine trials.

When she observed the data from the trials being handled improperly, she recommended they stop enrolling people in the trials. But her employer did not agree, so she reported them to the FDA.

She thought that the FDA would take action to correct this fraud, but instead, her employer fired her shortly after she contacted the FDA.

Brook Jackson learned the hard way that the FDA does not protect the public, but the pharmaceutical industry. Not only did the FDA not respond to her reporting, they did not even bother to investigate the site where the alleged infractions occurred.

So she took her story to the British Medical Journal (BMJ), who ended up publishing it because she backed up everything she was reporting with solid facts and information.

But when the article in the BMJ was shared on Facebook, the Facebook fact checkers marked it as fake news. See:

This is a common tactic that the FDA has done historically, by controlling the media to cover up the crimes of Big Pharma.

We reported about this criminal activity with the FDA in an article we published back in 2016:

In an October 2016 article in Scientific American, we learned how the FDA and numerous other medical research publications manipulate the media’s access to information. This process, known as a “close-hold embargo,” results in key media sources simultaneously publishing the same information without doing independent research.

The press corps is primed for manipulation by a convention that goes back decades: the embargo. The embargo is a back-room deal between journalists and the people they cover—their sources. A source grants the journalist access on condition that he or she cannot publish before an agreed-on date and time.

A surprisingly large proportion of science and health stories are the product of embargoes. Most of the major science journals offer reporters advance copies of upcoming articles—and the contact information of the authors—in return for agreeing not to run with the story until the embargo expires. These embargoes set the weekly rhythm of science coverage: On Monday afternoon, you may see a bunch of stories about the Proceedings of the National Academy of Sciences USA published almost simultaneously. Tuesday, it’s the Journal of the American Medical Association. On Wednesday, it’s Nature and the New England Journal of Medicine. Science stories appear on Thursday.

Other institutions have also adopted the embargo system. Federal institutions, especially the ones science and health journalists report on, have as well. Embargoes are the reason that stories about the National Laboratories, the National Institutes of Health and other organizations often tend to break at the precisely same time. [9]

This is how the close-hold embargo process works. A select group of reporters from high profile media outlets are invited to a private briefing, for example, at the FDA headquarters, to learn about rules governing a new product. The reporters who attend must make a commitment not to publish their stories until a certain date and time. They must also agree not to attempt to obtain reactions to the story from sources beyond the list of official sources provided by the FDA during the embargo, or to mention the existence of the embargo.

Each reporter has the identical set of information and the same amount of time to prepare their story. Since each reporter and their employer wishes to be seen as the one who broke the news to the public, they will all publish their stories at the moment the embargo has passed. They will not delay the publication by taking time to interview other sources who may have alternative points of view.

Once the initial set of stories is published by top-tier media organizations such as NPR, CBS, NBC, CNN, the Washington Post, the Wall Street Journal and the New York Times, then other media sources will use those reports as templates for preparing their own stories. They will also try to move as fast as possible, to avoid the appearance of publishing “old news.”

While all this rapid reporting of the official government controlled news is going on, the real story is often missed. The real story might lie in the deep controversy that was omitted or hidden by the FDA’s initial presentation. The truth may lie buried until the alternative media digs into the full set of facts and interviews the people who have dedicated their careers and even their lives to speaking about truth in a certain area. (Source.)

A report published in 2019 by the Pacific Legal Foundation found that 98% of the rulings passed by the FDA, which effectively become “laws,” were Constitutionally illegal. See:

Study: 98% of FDA Laws Are Unconstitutional

It’s time to abolish the FDA. They do not protect the rights of Americans, but the profits of Big Pharma.

Here is the BMJ interview from our Bitchute channel (since YouTube may at some point ban it). The original on Youtube is here.

See the related article where I expose the Facebook fact checkers on Health Impact News articles.