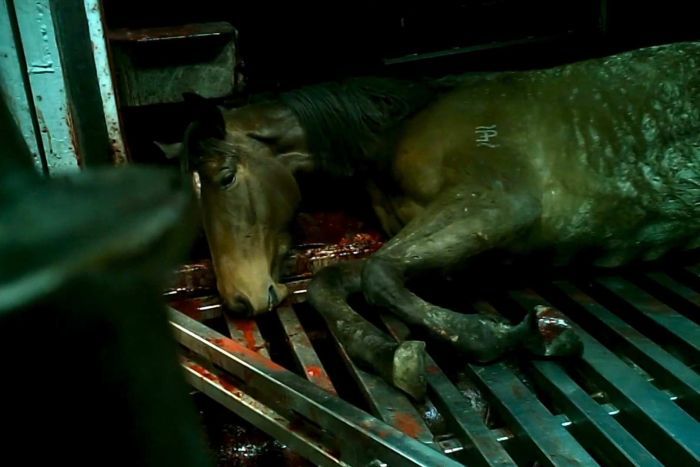 PHOTO: Racehorses in a pen at a Queensland abattoir. (ABC News)

Hundreds of registered racehorses are being discarded at slaughterhouses in Australia, in contravention of racing rules, rehoming policies and animal welfare guarantees.

WARNING: This story includes images which are distressing.

According to official data promoted by Racing Australia, the national body for thoroughbred racing, less than 1 per cent of horses retiring each year end up at an abattoir.

This represents around 34 horses per year ending up at slaughterhouses, according to the racing industry.

But the ABC has obtained information revealing that, based on a two-year investigation, the number far exceeds this.

Elio Celotto, from the Coalition for the Protection of Racehorses, has told the ABC that more than 34 horses have been killed in one week alone at a single abattoir.

“It equates to about 4,000 racehorses killed in this one abattoir alone,” he extrapolated.

The scale of killing has shocked industry experts including Professor Paul McGreevy, an animal welfare and behaviour scientist with 25 years research experience into the thoroughbred racing industry.

“This is the sort of stuff that will shake the industry to its core,” Professor McGreevy told the ABC.

“There is no way the industry can defend this. This is a clear breach of everything the industry has told us.

“The truth that has been revealed is that thoroughbreds are entering knackeries and abattoirs and that their treatment within those facilities can be appalling.”

Do you know more about this story? Email meldrum-hanna.caro@abc.net.au 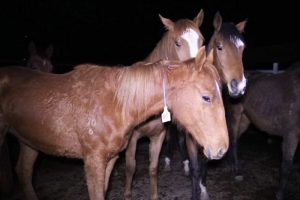 PHOTO: Racehorses in a pen at a Queensland abattoir. (ABC News)

The investigation has also uncovered multiple instances of what Professor McGreevy described as animal cruelty and unacceptable practices at Australian slaughterhouses.

This includes horses trapped inside kill boxes unable to move, while slaughterhouse workers apply electronic shocks on their bodies and anus.

Racehorses are also being lashed, kicked, stomped and terrorised.

Once-highly valuable champion horses have also been sent to slaughter.

“It is absolutely unacceptable that we could let our equine athletes down in this way,” Professor McGreevy said.

“It’s the racing industry that’s responsible for exposing these animals to this miserable end.”

‘The industry’s let a lot of people down’

PHOTO: A dead horse on the floor of a Queensland abattoir. (ABC News)

The grisly end being meted out to the racing industry’s unwanted horses is occurring on a weekly basis, despite Racing Australia introducing a “traceability rule” in 2016 requiring the registration and tracking of all horses from birth to retirement.

In the wake of the ill-fated NSW greyhound racing ban announced in 2016, the thoroughbred horse racing industry also introduced a raft of new animal welfare measures aimed at protecting the welfare of horses before, during and after their racing careers.

The centrepiece of the reforms in NSW and the ACT included a jurisdiction-first ban on the practice of discarding unwanted racehorses at knackeries and abattoirs.

The strict prohibition was introduced to the official Rules of Racing in both states. Other states introduced revamped rehoming and animal welfare policies.

In 2018, Racing NSW CEO Peter V’landys told the ABC’s Four Corners “the objective is that no horse that races or is domiciled in NSW — doesn’t have to get to a racecourse — but if it’s born, bred, domiciled predominantly in NSW, we’ll need to find it a home”.

But the ABC’s investigation can reveal racehorses are still being sent to slaughterhouses.

PHOTO: Professor Paul McGreevy says racehorses, and people who love them, have been let down. (ABC News)

“There’s a massive question mark over the regulator and the problems with self-regulation come into play yet again,” Professor McGreevy said.

Mr V’landys said he was unaware of any NSW racehorses being sent to an abattoir or knackery, including slaughterhouses in NSW and interstate.

“If it’s happening we will put the full force of the law against them because they’re breaking the rules of racing,” Mr V’landys said.

The NSW chief steward has confirmed to the ABC this afternoon that it will investigate the practice.

The ABC can also reveal that standardbreds from harness racing are being killed at slaughterhouses, despite the code’s policy of rehoming horses.

At the September hearings of the Senate Committee into the feasibility of a national “horse traceability” register, Harness Racing Australia CEO Andrew Kelly said the code had a “cradle to grave approach”.

“We do have a rehoming program with people in the industry rehoming their own horses,” he told the ABC.

But slaughterhouses will be revealed tonight as being the ultimate dumping ground for both the harness and thoroughbred racing industry’s wastage, with horses ending up at the facilities through a variety of ways.