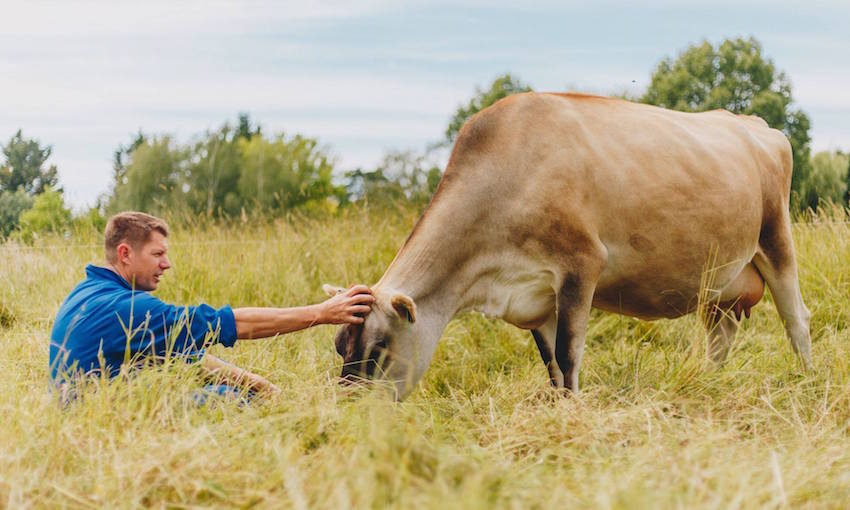 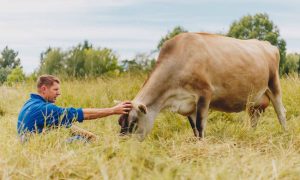 READ MORE AT THE SPIN-OFF

He founded an ethical dairying company that would allow calves to stay with their mothers. Last week, Glenn Herud had to admit that his enterprise had failed.

I’m a third generation dairy farmer. The milk business is the only business I know. Four years ago I decided to find a way to do dairy in a more sustainable way.

I founded Happy Cow Milk to make a difference. But last week I had to admit to myself that I failed.

I made the decision to shut down the business and I faced the hard truth that I haven’t really made any difference at all. So what went wrong?

In a country awash with milk – with so much invested – you’d think a few small changes would be easy. And you’d be wrong.

Let’s say you wanted to set up a new milk brand. You would approach one of the two contract milk processors in New Zealand. You’d ask, “Can you do glass bottles?” And they’d say, “No.”

In New Zealand, we can put beer, pasta sauce and even baby food into glass bottles, but not milk? No.

So definitely not reusable glass bottles? No.

So you’d ask, what about reusable milk cans or kegs to supply cafes? Again. No.

At this point you might just decide that there’s no way around this and put your milk in plastic bottles. This is what most smart people would do. But I know that most of the plastic milk bottles in New Zealand are not actually recycled. And so I built my own milk factory.

I used two shipping containers and all of my savings. When the MPI inspector came, I told him we would be putting our milk in reusable bottles and milk cans. After a heavy barrage of ‘no’s, I was pleasantly surprised when he said, “OK, cool.”

I taught myself basic process engineering and microbiology. I became an expert in the Dairy Processing Code of Practice. My reusable packaging hit the markets and cafes and the customers loved it.

Next, we needed milk. Most milk brands go to Fonterra, which is required by law to sell any competitor raw milk at the same price that Fonterra pay their farmers. When you are choosing a bottle of milk from the supermarket, it’s almost all Fonterra milk – even the fancy, expensive ones.

I wanted to change the dairy industry and I wasn’t going to do it by buying milk from Fonterra.

So I approached Canterbury farmers with a proposition. I offered to pay a 45% premium if they would change a few farming practices and leave the calves with their mothers.

I thought they could do it with a small number of the herd and that would increase over time. I did that pitch for five years with no takers.

They said leaving calves with their mothers wouldn’t work. And it doesn’t. Not on a conventional dairy farm, anyway. This is because cows have to walk about 2km to the cowshed & back again – two times a day.

It’s really hard to walk a herd of cows with newborn babies by their side for 2km down the lane and back again. The calves go under fences and then the mothers try and follow them. It’s chaos. When they do get to the shed, the calves are easily crushed in the crowded holding yard.

Smart people would just stop there.

But I wasn’t comfortable with the practice of removing calves from mothers and sending four-day-old calves to be slaughtered. I knew that if consumers really understood this practice, they wouldn’t be comfortable with it either. And that day would come.

So I developed a whole new way of milking cows. I built a mobile cowshed. We brought the cowshed to the cows. The cows only have to walk about 30 metres to get milked. Once milked, they walk off the platform and back to the grass and their baby.

I can’t tell you how hard it was to develop that cowshed and get it approved by MPI. Getting there used up the last of my capital.

But we were selling milk and adding customers and we were fast approaching our break-even point.

Then we struck a problem.

We struggled to convince large retailers to stock our milk in reusable bottles. Supermarkets are not really set up to take empty bottles back. The admin proved cumbersome.

Retailers also saw us as a “niche” product that customers would pay more for. They attached a high margin and suddenly the retail price was very high. Demand flattened and the break-even point stretched out further on the horizon.

We needed to scale the business to make it profitable. But without a smooth path to market, we couldn’t scale.

There was always an easy solution. We could’ve decided to be another milk brand in a plastic bottle. But this wasn’t the change I envisioned.

It’s easy to do a farm environment plan or use a recyclable bottle. But these are just incremental changes and piecemeal commitments to sustainability. Now it’s clear that to go further, I would have to redesign and build my own distribution network so that we can get a large enough volume of milk to customers at a reasonable price.

I worked out a plan with the help of advisors at KPMG and I figured out how much this new network would cost.

But last week I hit a wall. I’m out of money. I’m tired. My kids have not had a proper dad. And I’ve been a pretty poor husband. I decided to admit that this is the end of the road.

On April 5, I typed a message on Facebook to say I was closing down. “I set out to prove that you can do dairy differently in NZ. But in reality you actually can’t – not without some serious money behind you. Thank you all for your support.”

By the end of the day, there were hundred of comments, offers of support, suggestions for crowdfunding. Designers, writers, marketers I’d worked with offered to pitch in. I was overwhelmed.

And then my fatal flaw emerged. The one that got me past all those early ‘no’s and sustained me through four years of hard graft – my relentless optimism.

So 24 hours later, I was back on Facebook, sketching out ideas on how Happy Cow V.2 might work.

Change is hard. You have to climb over a lot of ‘no’s to get there. But this story might not be quite over.

If you would like to help our cause please consider signing up for updates at happycowmilk.co.nz