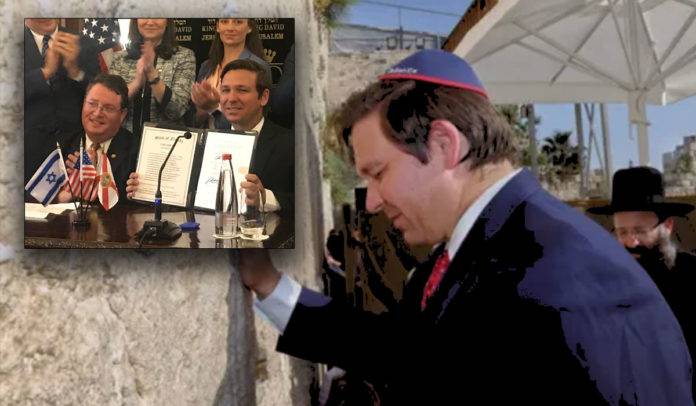 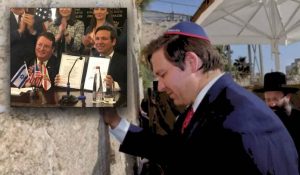 Governor Ron DeSantis of Florida recently signed a bill which added ‘anti-Semitism’ to the list of outlawed forms of discrimination in Florida, equating it with other forms of racial discrimination, reported the Tallahassee Democrat.

The major problem many have with this bill is that the definition of Anti-semitism under this law includes everything from saying the “Jews control the media,” “Jews are more loyal to Israel than to America,” to many other questionable statements that are protected under the first amendment of the United States constitution. It is also now illegal to question the number of Jews who died in the Holocaust.

No other genocide has this protection in the world.

Even though Christians are the most persecuted group of people throughout the world, for some reason DeSantis thought that signing a law that goes directly against the first amendment of the United States would be a good idea. DeSantis even signed the bill while visiting Israel, and then again in Florida upon returning from his trip.

Following the signing of the bill, many Christians have posed several important questions about this new law, namely that there are no laws against openly blaspheming Christianity or Jesus.

There are also no laws against accusing all Catholics of being pedophiles and no broad words with blanket definitions like ‘Anti-semitism’ that protects Christians from the criticism they receive on a constant basis.

It is also not yet a hate crime to fly a pride flag outside Chick-fil-A, but what can you expect when Christians don’t have the powerful lobby to push for laws like this like Jews do with AIPAC. Many Christians are wondering if AIPAC money is behind this new law signed by DeSantis.

There are currently 26 states in America that have their own versions of antisemitism bills, and all of them go directly against the first amendment.  Most of these laws prevent private businesses from boycotting the state of Israel, even though America was built on boycotts, but hey who actually cares about facts.

Outside of all of this, actors in Hollywood including Jewish actors have openly admitted that Jews are vastly overrepresented in Hollywood. From Adam Sandler to Nick Kroll and Marlon Brando, they all openly admit that Jews do in fact control Hollywood and Media.

It is now illegal in Florida to tell the truth about the start of Hollywood like this, thanks to @GovRonDeSantis – He HATES the constitution

DeSantis’ broad definition of antisemitism even includes saying that some Jews are more loyal to the state of Israel than the country that they reside in.

The facts?  Well that is the exact definition of Zionism according to Theodore Herzl the founder of Zionism.  Herzl says that it is useless for a Jew to be loyal to the country that they reside in because Jews are ‘one people’ and their loyalty should only remain with Israel.

This was explained to the state department some time ago, seems like DeSantis did not get the message….

DeSantis’ broad definition of antisemitism even includes saying that some Jews are more loyal to the state of Israel than the country that they reside in. Here are The facts @GovRonDeSantis – I hope you spend that AIPAC money wisely

and even if we just scratch the surface of the names at the top of the companies that own the major media conglomerates, we find that DeSantis has also outlawed the truth, like it or not.

Here are just a few of the names of Jews at the top in media:

Benioff was raised in a Jewish family (Wikipedia)

Felsenthal was born in a Jewish family in Memphis, Tennessee (Wikipedia)

His father was a “kindly Jewish  (Wikipedia)

“I was born Jewish and raised Jewish” (Time.com)

MORTIMER ZUCKERMAN, owner of NY Daily News, US News & World Report and chair of the Conference of Presidents of Major Jewish American Organizations, one of the largest pro-Israel lobbying groups.

LESLIE MOONVES, president of CBS television, great-nephew of David Ben-Gurion, and co-chair with Norman Ornstein of the Advisory Committee on Public Interest Obligation of Digital TV Producers, appointed by Clinton.

JONATHAN MILLER, chair and CEO of AOL division of AOL-Time-Warner

MARTY PERETZ, owner and publisher of the New Republic, which openly identifies itself as pro-Israel. Al Gore credits Marty with being his “mentor.”

ARTHUR O. SULZBERGER, JR., publisher of the NY Times, the Boston Globe and other publications.

DONALD GRAHAM, Chair and CEO of Newsweek and Washington Post, son of

STEPHEN EMERSON, every media outlet’s first choice as an expert on domestic terrorism.

DAVID SCHNEIDERMAN, owner of the Village Voice and the New Times network of “alternative weeklies.”

HENRICK HERTZBERG, Talk of the Town editor, The New Yorker

DONALD NEWHOUSE, chairman of the board of directors, Associated Press.