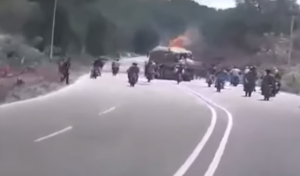 In Venezuela, socialism has bled the people to abject poverty. And now the dystopia has begun.

A new video posted online shows what appears to be the latest example of “Mad Max” like conditions in the poverty stricken country. In the video, a motorcycle gang attacks a truck that’s carrying sugar. You will see flashes, that’s grenades being launched in front of the truck’s route.  Some of the vehicles on the road turn around and leave while others join in on the food raid.

Folks, after watching this video, you should definitely have a bug out bag ready to go.

Socialism has destroyed an entire country in just under five years. This is a prime example of how society decays when the system completely collapses. It may look like a fantasy movie script, but it is real life in the real world we all live in. And this type of thing could happen right here in the United States.

Remember, most people in the United States want socialism, so the prospect of full-on socialism is not unrealistic. Many of our government programs are simply socialist programs hiding in plain sight. Bernie Sanders could have been elected had the Democrats not swindled him out of the nomination.  Once the financial system collapses, the above video is exactly what we will be left with.

History is our teacher and history shows us that socialism is a bust. It also shows us that when humans get desperate, bad things tend to happen. Remember, those people in the video are fighting for sugar. The value of simple sugar in a dystopian society is this high.

Click Here To Vote For Our Prepper Site!
source: https://prepforthat.com/insane-video-shows-mad-max-biker-attack-in-dystopian-venezuela/

cuddy45: Excellent podcast Adam. Concerning marks, here in South Korea its been...
Gus: We have a Judas in our midst but the payback is much more than 30 piec...
Matthew: Thanks a lot Adam for posting up the article and your assessment on yo...
Diane Drayton BUCKLAND: COME ON ALL AUSTRALIANS PLEASE LISTEN AND HEED THESE GRAVE WARNINGS &g...
Veri Tas: I went to the trouble of viewing the political platforms of all the pa...
Diane Drayton BUCKLAND: Thank you for your remarkable work on this website to inform the popu...
cuddy45: Excellent podcast Adam, good to see that you now reporting this most c...
Diane Drayton Buckland: I have shortened the Information for anyone wanting to share it. Thank...
Diane Drayton Buckland: I have shortened this information now for anyone wishing to share wide...
Matthew: Malcolm Roberts / One Nations will also oppose the WHO dictatorship - ...