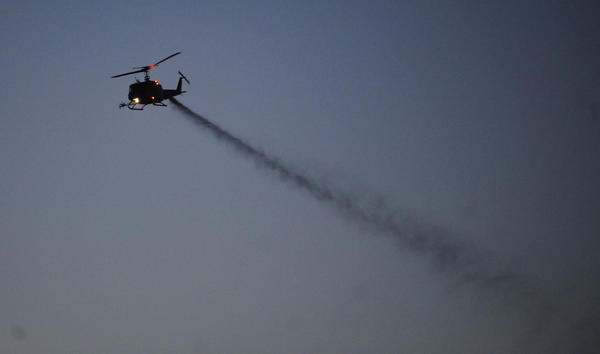 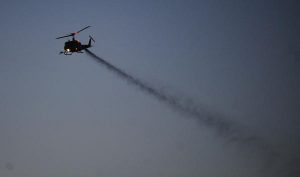 KEY WEST, Flor. (INTELLIHUB) — British and Canadian citizens have been told to use caution when traveling to Florida and have been warned away from having sexual intercourse within the state as the Zika virus, carried by mosquitoes, is now spreading through several counties.

In Miami authorities are maintaining statements that the virus has been contained to a one square mile zone in the city as workers diligently continue ground and aerial spraying efforts in order to control the virus’s spread.

In the Florida Keys aerial spraying via helicopters is the preferred method of disbursement and so far there has been little blow-back by residents of what is being sprayed out of the nozzles as fears of the virus rise.

Several times a week a helicopter, equipped with a special spraying apparatus which is designed to release insecticide, can be seen flying as low as 50 feet above ground level hosing the populace with product. In fact, on July 28, I myself and another bystander to the spray operation were hit with the poison in our eyes which caused an immense burning feeling — much like pouring gasoline in your eyeballs I assume, because it burned.

The following video was taken in 2015 and shows normal mosquito control in Key West:

The CDC website provides the following info on Zika:

Shepard Ambellas is an opinion journalist, filmmaker, radio talk show host and the founder and editor-in-chief of Intellihub News & Politics. Established in 2013, Intellihub.com is ranked in the upper 1% traffic tier on the World Wide Web. Read more from Shep’s World. Get thePodcast. Follow Shep on Facebook and Twitter.