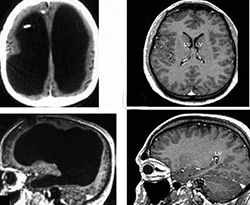 CAT scan image (left side) of the water filled skull of a French civil servant. Despite the lack of brain matter, this man is able to function in life. Right images are of a normal brain.

This is what we’re told: Your brain is where your mind, consciousness and personality reside. “Reductionism,” noted the English writer & philosopher Colin Wilson, is the “simple theory that tries to explain the mind in terms of physical mechanisms.” Thus, consciousness “is a mechanism of the brain and nervous system.”1

Put another way: Our mind, our consciousness, our awareness and our personality all come from the brain’s chemical and electrical machinery. When the brain works our ‘mind’ is its product. And when the brain stops working we simply cease to be. That’s the standard scientific presentation.

The opposing view is we have a ‘soul’, a conscious self-awareness that uses the body and brain to gather and process information. When the brain stops working the ‘soul’ leaves the body to continue its existence in a so-called ‘afterworld’.

Thanks to modern CAT scans, scientists can see inside people’s heads and view their brains, with some surprising results. The results don’t prove we have a ‘soul’ but certainly reveals there is something very wrong with the mechanistic theory that “mind is a function of brain.”

There are people with 9/10ths of their brain cells replaced with water, and they still function normally. Refer to the images above. On the left, the dark area in the CAT scan is water (cerebrospinal fluid) and on the right is a normal brain. The horrifying photo to the right shows mother and her child with hydrocephalus. In babies, who have a soft skull, excess water in the brain can result in hugely inflated skulls. In adults the same process results in a brain that is squashed against the side of the rigid skull (as in the CAT scan). In some cases less than 10% of brain remains, yet these people often continue to function normally.

We are told or presume this is impossible because the image (on page 37 of the print magazine) shows the areas in which various functions of the mind take place. The second image illustrates the way electrical and chemical impulses turn the brain into our mind allowing us to think, to have memories and to function in our daily lives. But it appears there is something wrong with this concept… Well, maybe not wrong but inadequate.

The CAT scan image of the water filled skull belongs to 44-year-old French civil servant (proving, I guess the old adage, that civil servants are often brainless) who is married, has two children and lives a normal life. Another case often cited in the literature is of a man with a brain weight of between 50 and 150 grams – normal brain weight is 1,500 grams – who has a first class honours degree in mathematics and a tested IQ of 126. This man was documented by neurologist Dr. John Lorber who ran the spinal bifida unit at Sheffield Hospital. He studied 600 people who had this condition. Some had ‘only’ between 50 and 70% of their brains replaced by fluid, some between 70 and 90% replaced fluid, and there were 60 people who had 95% of their brains replaced by fluid. Of the last group, half had an IQ of over 100 (which is considered the mean average for intelligence).

There are enough cases of, for all intents and purposes, average people who have their head filled with water not normal ‘grey cells’. This is a challenge to the accepted theory that mind, personality and consciousness are the result of chemical and electrical activity between ‘grey matter’ in the brain.

Perhaps the idea that our personality rests in our heart or liver has something going for it? Aristotle believed the brain just served to cool the blood.

How does the medical and psychology establishment explain the ‘inconvenient’ fact there are a considerable number of people who can function without a brain? Simply by distorting or ignoring the data available from CAT scans.

Here are a few quotes:

“Scores of similar accounts litter the medical literature and they go back a long way,” observes Patrick Wall, professor of anatomy, University College London. He adds, “To talk of redundancy is a cop-out to get around something you don’t understand. How can we explain it?”2

“There is a tendency in the medical community and elsewhere to marginalise anomalous observed phenomenon, to shove such troubling stuff into a closet where it can be safely ignored.”3

“We live in a definition based reality, with a peer review ensuring that definitions are maintained.”4

“If the facts in a discussion are against you, ignore them or change them.”5

And here are the two common explanations:

“We use such a small percentage of our brains anyway – perhaps as little as 10%.”

“…there is such a high level of redundancy of function in the normal brain that what little remains is able to learn to deputize for the missing material.”6

Here is a further thought by a neurologist:

“[The discussion] reminds us of the mystery of memory. At first it was thought that memory would have some physical substrate in the brain, like the memory chips in a PC. But extensive investigation of the brain has turned up the surprising fact that memory is not located in any one area or in a specific substrate. As one eminent neurologist put it, ‘memory is everywhere in the brain and nowhere’. But if the brain is not a mechanism for classifying and storing experiences and analysing them to enable us to live our lives then what on earth is the brain for? And where is the seat of human intelligence? Where is the mind?”

“One of the few biologists to propose a radically novel approach to these questions is Dr. Rupert Sheldrake. In his book A New Science of Life Sheldrake rejected the idea that the brain is a warehouse for memories and suggested it is more like a radio receiver for tuning into the past. Memory is not a recording process in which a medium is altered to store records, but a journey that the mind makes into the past via the process of morphic resonance. Such a ‘radio’ receiver would require far fewer and less complex structures than a warehouse capable of storing and retrieving a lifetime of data.”7

My position is close to that of Sheldrake. As a way of finding a solution to the metaphysical riddle of ‘do we have souls’, I postulate that the body and the brain are actually antennas that pick up limited wavelengths of information [see main article ‘Antenna Theory of Consciousness’ in New Dawn Special Issue Vol 10 No 4]. My concept also takes into account the ‘spine brain’, with its associational cerebellum. I consider this the seat of the ‘Monkey Mind’ – the Body Mind we use for everyday worldly functioning. (Note that in the CAT scans the cerebellum area of the brain remains intact). The skull brain I consider a link to the cosmic whole, what in some literature is referred to as the ‘Higher Self’.

My Antenna Theory of human consciousness has much to recommend as an explanation of the ‘brainless’ phenomena. I suggest that the people involved are missing only one aspect of their consciousness – their connection to the stela cosmos – but retain the use of their spine brain and cerebellum to continue to lead their daily lives.

To check if my hypothesis has value, it would be interesting to see if the severely affected have a spiritual awareness and creative ability. What are their dreams and sleep patterns? Can any electrical activity in their brains be found and assessed? The fact that this research apparently hasn’t been done may be simply because, as quoted above, “There is a tendency in the medical community and elsewhere to marginalise anomalous observed phenomenon, to shove such troubling stuff into a closet where it can be safely ignored.”

STEVEN GUTH studied Social Psychology at University. Later experiences with Aboriginal people, Eastern Religions and Esoteric systems have engendered increasing doubts about currently accepted Western ideas about what it constitutes to be a human being. Maybe, as he suggests in this article (and other material on the web), it is time to rejig our beliefs about what it means to be alive and human. Currently he is writing a book about esoteric Taoism. Read more of Steven’s theorising at www.messagestone.net, qisynic.net, gaiaqi.net, chisync.com & www.kheper.net/ecognosis/index.html.

7 thoughts on “Is the Brain Really Necessary? The Answer Seems to be a No-Brainer”