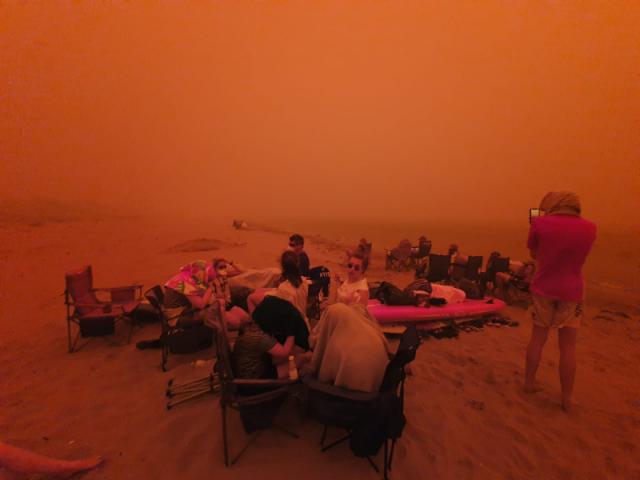 Three missing people in bushfires burning on NSW south coast are feared dead a day after one of the state’s volunteer firefighters died in a truck accident.

The three civilians are unaccounted for in NSW south coast, two in Cobargo and one in the remote Belowra.

Shortly after 3pm, NSW Premier Gladys Berejiklian confirmed that two people from Cobargo had died in the fires. The third person remains missing.

Cobargo, to the west of coastal town Bermagui, has been aflame for much of Tuesday, with multiple buildings on the main street on fire and RFS crews struggling to save properties.

The town was evacuated earlier in the day and a number of buildings have now been lost. Parts of the main street have been completely destroyed.

Meanwhile fires have ravaged much of the NSW south coast further to the north with popular tourist spot Batemans Bay being lashed by flames and engulfed with thick smoke.

The fire affecting Cobargo is the Badja Forest Rd fire near Cooma, which is rapidly moving eastward and was predicted to be among the blazes on Tuesday to expand most significantly, along with a fire in the Snowy Valleys.

Almost 100 blazes continue to burn across NSW, with dozens uncontained and eight at “emergency” level on Tuesday.

Extreme fire danger is forecast for the Southern Ranges, Illawarra and ACT on New Year’s Eve while surrounding regions – including Sydney, the Hunter and the far south coast – are set for severe fire danger.

Massive traffic queues to escape the township popped up on Beach Road, but it is now too late to leave, authorities said late Tuesday morning.

One woman who attended an evacuation centre in Batemans Bay described the scene as “apocalyptic”.

Many of those who were unable or unwilling to evacuate have been told to seek shelter at the beach.

“Batemans Bay was not ready. People have nowhere to go. Shops closed and people in parked cars next to the ocean,” a local posted on social media on Tuesday afternoon.

“The streets are fairly empty at the moment. People are heading the advice to get out of the area,” one resident told the ABC earlier on Tuesday.

There has been multiple reports of houses lost in Batemans Bay and the surrounding area.

“Mum just called me in tears to [say] my family house in Surf Beach, Batemans Bay has been destroyed,” one person wrote on Twitter. “My parents have lost everything.”

Meanwhile workers at the Mogo Zoo, situated about 10 kilometres south of Batemans Bay, were working overtime to protect the venue’s roughly 200 animals including zebras, white rhinos, lions, tigers and giraffes.

“The zoo’s plan was always to defend the site, because we could make it safe here for all the animals,” director Chad Staples told the ABC.

“Thanks to the amazing team that just love these animals like their family, we were able to do so. It was amazing.”

As of 1:20pm there are eight emergency warnings in place for NSW fires. Stay up to date with the latest information here.

NSW police have urged residents to consider the need to travel on Tuesday night.

“Road closures are changing constantly – some with little notice – and drivers are urged to avoid unnecessary travel,” police said in a statement.

As a number of holiday-makers return home to Canberra from the south coast, they will be in for a quiet New Years evening as Canberra has cancelled its fireworks as well as entertainment events in the city due to extreme and highly unpredictable weather conditions.

The intensifying crisis on the final day of the year comes after a volunteer firefighter died when his truck flipped amid a “fire tornado” at a NSW-Victoria border town.

Samuel McPaul died on Monday just before 6pm when the fire truck he was travelling in crashed at Jingellic, about 110km east of Albury, in NSW.

An emotional Rural Fire Service commissioner Shane Fitzsimmons said on Tuesday the 10-tonne truck was hit by winds so extreme at the 26,000-hectare Green Valley fire that it flipped on its roof.

The 28-year-old, who was expecting his first child in May with his wife, Megan, who he married last year, died at the scene.