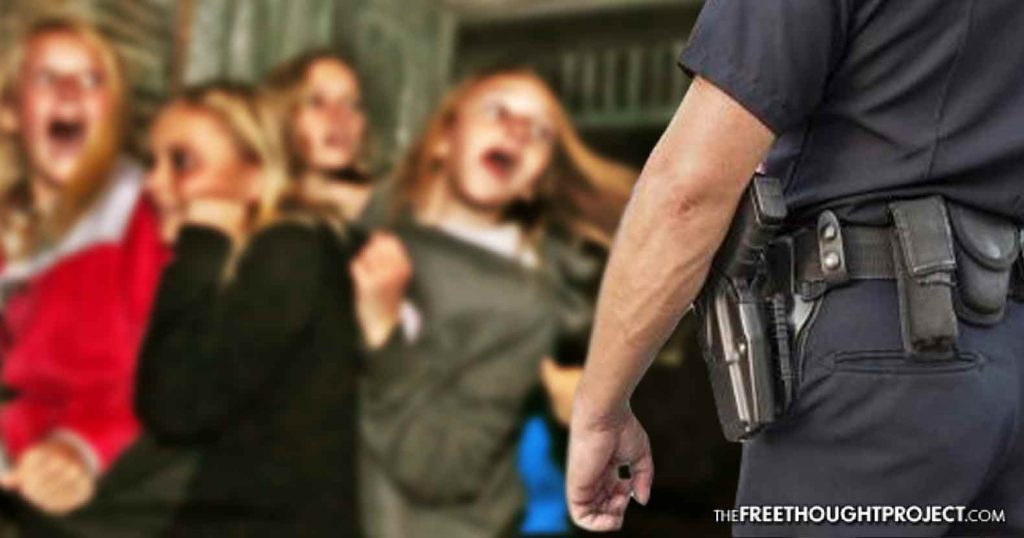 The girl’s program is attended by some of best and brightest high-schoolers Florida has to offer. “Everyone who’s going is at the top of their class,” Cameron Carlyle said describing the high-quality candidates who attend the elite leadership camp. But no amount of education could have prepared the girls for what happened on the last night of their training.

The Girls State director along with six Florida State Troopers, all female, pulled an attendee aside and told her she would be participating in a kidnapping drill, one which highlighted the real-world problem of sex trafficking. Under the cover of secrecy, the volunteer named “Katrina” was taken to a safe place. Thereafter, roll call was taken with the remaining girls.

Carlyle, who volunteered this year to be a camp counselor, said when the count-off got to number 8, “We realized Katrina was missing.” Soon the State Troopers began screaming, she’d been kidnapped, and blamed several girls for her abduction.

The troopers told the attendees the girl had been kidnapped and was probably sold as a sex slave to human traffickers who would use her for prostitution purposes.

They began blaming the other girls in the room, as well. “I’ll never forget that feeling of just that ‘it’s totally my fault and now I’ll have to tell her parents she’d been taken,’” Carlyle said speaking of the experience.

It wasn’t until about a half-hour later, amid tears and paralyzing fears from attendees, that the girls learned their fellow camper was unharmed.

Carlyle said she had 17 girls who simply did not sleep that night, traumatized by the training experience gone horribly wrong. One girl in the program had been involved in a real human sex trafficking incident when she was younger and was emotionally shaken.

While the subject of sex trafficking is a very serious one which should not be taken lightly, it’s safe to say the FL State Troopers may not have put enough forethought and planning into the exercise. The fact that one attendee had been sex trafficked is proof enough the troopers had not potentially considered all the scenarios.

Any serious attempt to help teens prepare for the potential of being exploited sexually, must include how pedophiles seek to become authority figures, so they can use those positions to take advantage of children. Merely tormenting girls by hosting a fake kidnapping does absolutely nothing to prepare them later in life for any real scenarios.

Terri Miller of Stop Educator Sexual Abuse Misconduct & Exploitation is considered a leading expert on educator sex predation. In a recent interview, Miller described how authority figures are often teachers. “Perpetrators often wear a mask of deception,” Miller said. “It’s very common for these perpetrators to be teachers of the year and award-winning coaches.” She added the victim is, “the only one who knows the monster.”

But as The Free Thought Project has all too frequently reported, pedophiles are often police officers as well. In North Carolina, a police officer was recently convicted with seducing and impregnating a 14-year-old after obtaining permission from the teen’s mother to serve as her “mentor.”

Just this month, a police chief was arrested on felony charges of attempting to engage in sex with a minor. As Antimedia’s Carey Wedler reported, “Michael Zeug, 45, was arrested in Redwood Falls after soliciting sex with an undercover Department of Homeland Security agent via text message. Zeug contacted the ‘girl’ after seeing an online ad. The officer pretended to be a seventeen-year-old girl who wanted to make extra money, local CBS Minnesota outlet WCCO reported. Zeug appeared to acknowledge the risk, saying, ‘you’re only 17.’ He also said he had done this type of thing before and lied about his profession (as Chief of Police); he claimed to be a farmer.”

It’s unclear if lawsuits will result from the FL Highway Patrol’s missteps. However, make no mistake about it, leaders at Florida’s celebrated Girls State Program and the FHP owe each girl an appropriate apology, which should also include counseling paid for by the FL Highway Patrol. After all, whether they want to admit it or not, they’re now guilty of abusing children in their care, precisely what pedophiles do when given positions of authorities.

Jack Burns is an educator, journalist, investigative reporter, and advocate of natural medicine. This article first appeared here at The Free Thought Project.