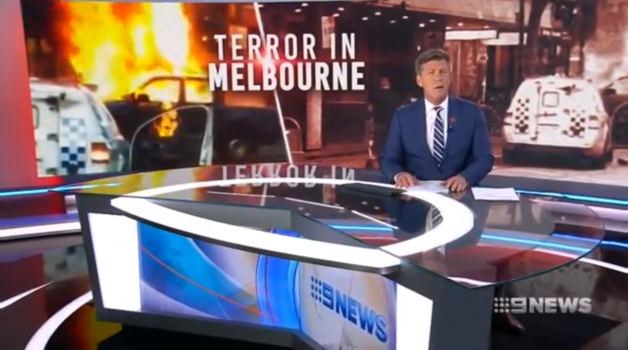 The mainstream media are the true peddlers of fear.

In a climate of constant media propaganda and spin designed to keep us in a perpetual state of fear, we again see an incident on Australian soil quickly described as a “Terror Attack” by the mainstream media.

There are a few things that seem odd about this incident which I will go over later but that’s not exactly what I’m shining a spotlight on here. What I wanted to point out and keep the public aware of is the blatant use of public perception and mind manipulation tactics employed by the news media.

Some of the tactics include visual stimuli such as graphics and footage like bold and obvious titles like the image below. But it’s the auditory catch cry’s like the overusage of the word TERROR or variants of it.

If you watch the footage by clicking the below YouTube link you’ll see the coverage by Channel Nine News. You may want to view it a few times for prudence.

The word ‘Terror’ or variants of it were used 9 times in that 4 minutes and 39 seconds video. Not including visually. Just audible uses.

The obvious uses were the 2 times the reporter at the end of the segment described the incident as “Terrifying” although her pronunciation sounds more like “Terrorfying“. (Time stamp at 4:17 & 4:30).

Own a thesaurus? That reporter could have used a multitude of synonyms to adjectively describe the incident however she chose “Terrorfying“.

These are clear tactics employed by the social engineers and media manipulators to keep us, the general public, in that perpetual fear state so we are more easily controlled. Whether this was a genuine act of terrorism or simply a violent act carried out like the many police are confronted with on a daily basis is yet to be seen. However the narrative from the mainstream media is clear. Terror & Fear.

Now as I mentioned earlier there are a few odd things about this incident that seem a bit out of place or need further investigation and explanation. Though I’m not hopeful of such an outcome. But I will as the questions in the hope of making everyone more aware that there’s more to this than meets the eye. If you’re able to shed any light on them or offer any theories please do contribute in the comments below.

This is indeed odd as the media and authorities love to get a name out to the public. Especially if it’s African or Arabic sounding. Usually to further fuel xenophobia amongst us.

2) Why did the police not use their tasers or pistols?

All police are armed with tasers and pistols for use in these situations. Instead you can clearly see them trying to beat him with their batons. I can confirm that police are trained to deal with this situation with a taser or lethal force. “Warn, then shoot if the assailant comes at you while maintaining safest distance possible”, a former Queensland Police officer said to me. They also outnumbered him which means they had the upper hand and more opportunities to incapacitate the attacker for arrest or kill him.

3) It seems like the uniformed officers were attempting to stall the attacker and keep him occupied until help arrived.

In the footage above you can see the police almost going toe-to-toe with the attacker. They jostle back and forth and swing their batons at him and hold them up to block his knife swings and lunges. This is NOT what they are trained to do. It appears as if they are stalling and buying time until back up arrives or another law enforcement group arrives.

4) Did the uniform police shoot and kill or was it someone else?

In the footage we can see someone from the dark coloured SUV that pulled up get out with their gun drawn. Was it this person that shot the man dead or a uniformed officer? The 2 men in black seen standing over the attacker as he lay shot on the ground do appear to be police but more of a SWAT style special response group as the one with the police style cap on is seen with gun drawn pointing at the man on the ground. While uniformed officers don’t appear to have their guns out. See images below.

Attacker alive as SUV pulls up

Special Response Officer gets out

Pistol out and attacker now lying on ground. Presumably after he is just shot.

Above 3 images we can see capped officer still holding pistol up after it seems he shot the attacker.

4 thoughts on “Language of Fear: Attack in Melbourne”