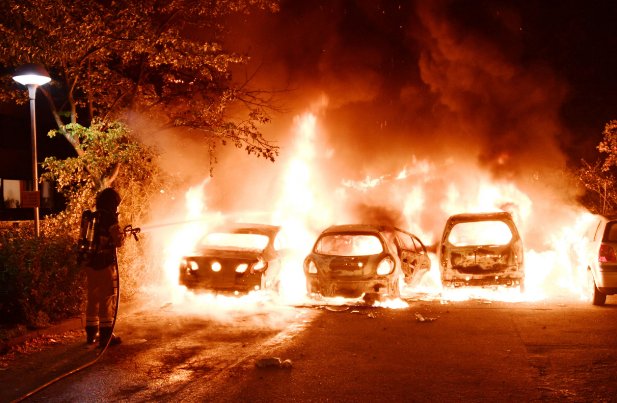 The last remaining station in the troubled Järva area will most likely have to close, police sources have said, due to lack of staff.

The police station in Kista is the only one still open in the Järva area, in which lie the suburbs of Rinkeby, Tensta, and Husby  — migrant-dominated neighbourhoods classed by Sweden’s National Police Operations Department (NOA) as “vulnerable”.

According to police sources, the move to close the station has already begun, and there are no plans for it to be reopened. Officers who work at Kista station will be moved to police headquarters in Solna.

MALMÖ: 3 cars set on fire in no-go zone in the Swedish city. https://www.svt.se/nyheter/lokalt/skane/bilar-sattes-i-brand-i-fosie-industriomrade …

Approached for comment, Stockholm area regional police chief Ulf Johansson said he was not “fully up to date” with details regarding the station’s closure, but told SVT “the premises in Kista left a lot to be desired when it comes to the work environment”.

In March, plans to replace Rinkeby’s police station, which closed in 2014, were put on hold because construction companies feared for the safety of their workforce in the majority migrant suburb, which is notorious for gang and gun crime.

Last year Breitbart London reported how Sweden’s police were facing a “major crisis”, with up to three officers quitting each day and 80 per cent of the force considering switching careers due to the danger they face in the field.

“The violence against us in the police and the paramedics and firefighters, has become much worse. We’re talking about stone throwing, violence, fires. It has become much worse in recent years,” Swedish police Sergeant Peter Larsson told Norwegian state broadcaster NRK.

Police officers, who wished to remain anonymous, slammed the move, saying it will have a negative effect on residents.

“It is terrible that we can’t be close to the citizens, and sad and shameful to move the police station,” a source told SVT.

“It hurts to know that residents will not be able to get the help and support they need,” said a police source. “This station has been important to the area.”

Lamenting how police are “moving further and further away from citizens”, another source said it is a shame the station will be closed, noting: “Officers gained a lot of local knowledge working in Kista, and residents had confidence in us. We lose all that now.”

Describing the station’s closure as “embarrassing”, another officer who works in Kista said staff “have lost all hope in the idea that our politicians are going to spend money on the police”.

“Look at how the results have been, it’s terrible,” added the source, alluding to a report leaked last week which showed the number of neighbourhoods classed as “vulnerable” by Swedish police has risen from 15 to 23 in just two years.

Police forces “find it difficult to carry out [their] mission” in neighbourhoods classed as “vulnerable”, according to NOA’s research, for a number of reasons which include “an unwillingness of the population to participate in legal proceedings”