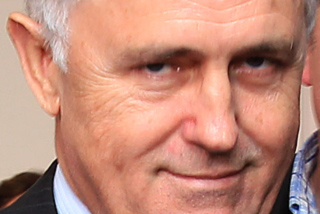 Here I offer a quick wrap up for the totally criminal & discriminatory, No Jab propaganda campaign.

Australian Prime Minister, Malcolm Turnbull who is deeply tied to pharmaceutical corporations is now pushing for a blanket childcare ban for all unvaccinated children. According to Sky News

Unvaccinated children would be banned from childcare centres and preschools across the country under a push by the federal government.

Prime Minister Malcolm Turnbull has written to state and territory leaders in a move towards introducing consistent laws to protect children across Australia. ‘The AMA says that next to clean water, this is probably the most important public health measure that a country can have,’ Mr Butler told the ABC. Malcolm Turnbull has been at the forefront of the No Jab fear & propaganda campaign since taking the top job on 14th  September 2015.

The AMA would have us believe that vaccines are like running streams of crystal clear water & absolutely vital for the health of our children. AMA requires the perpetual cover-up of Cochrane evidence for conventional treatments. In a fantastic & very telling article entitled, Dr Bruce Rapley Slams Australian Medical Association as Totally Unqualified Wind Industry Propagandists It states,

The AMA has published all sorts of drivel – drafted up by the wind industry and its parasites – in a deliberate effort to cover up the mounting evidence of real and substantial harm to Australian citizens. So much for that old chestnut about requiring doctors to “first do no harm”…

Willfully turning a blind eye to a serious public health issue is one thing, but actively assisting the perpetrators is quite another. To say that the AMA has become a National disgrace is to flatter them: Australian Medical Association: A National Disgrace

Malcolm Turnbull has been at the forefront of the No Jab fear & propaganda campaign since taking the top job on 14th  September 2015.  This is no surprise considering his ties to Big Pharma along with his wife, Lucy Turnbull’s position at Prima Bio Med. The Mind Unleashed  recently published a fantastic article entitled, Australian Prime Minister and Wife Tied to Pharma, Pushing Mandatory Vaccination

In its full perspective, No Jab No Pay is an eventuality when you see who holds power in the country. Let’s start with the Australian Prime Minister, Malcolm Turnbull. He’s a multi-millionaire, with a chairman of a pharma corporation (who works with Novartis and GlaxoSmithKline) for a wife.

Similar to how ex-FDA commissioner Margaret Hamburg’s husband owns a hedge fund called Renaissance Technologies, which owned stake in pharmaceutical companies she failed to properly regulate, the Australian Prime Minister and his wife Lucy Turnbull get rich together.

While the Prime Minister leads the government and pushes for mandatory vaccination to the benefit of pharmaceutical companies, his wife Lucy is chairman of the pharma corporation Prima Biomed. Her company has worked closely with some of the world’s largest pharmaceutical corporations, Novartis and GlaxoSmithKline. 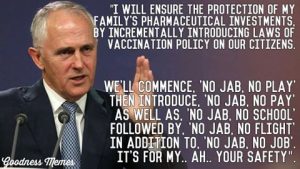 Opposition Leader, Bill shorten came out swinging earlier this week in regards to One nation Leader, Pauline Hansen’s evil comments about informed consent.  Shorten stated on Twitter, I wrote to Pauline Hanson asking her to get briefed on vaccines by the Chief Medical Officer before spreading dangerous misinformation.

In yet another disgusting media witch hunt, Hansen was hunted down by the Pro-Vaccination cult members before being cornered & forced to apologize to the state for daring to question vaccine safety.

In a recent post by Truth Library entitled, Labor, Liberal and Big Pharma – The Conflicts of Interest Surrounding Australian Politics We find some very disturbing information about Bill shorten’s Brother In Law being a sales manager at GlaxoSmithKline. It must be noted that the article is based on the opinion of the writer but does bring up a serious conflict of interest in regards to No Jab.

Thomas Bryce, according to his Linkedin page, has the past in the record industry. Working as a sales manager for a few different record labels and festival organizers. This isn’t really anything relevant if it wasn’t for him moving into a sales job at GSK in 2005. He worked his way up into a leading position in regards to vaccines. Does this have anything to do with his family’s influential ties? Does this have anything to do with the push for Shorten to become the Labour leader? Who knows. But it does raise many questions of conflict of interest and it makes people wonder if the leader of the Labour party might have some darker motives in regards to his vaccine policy.

No Jab was launched by The Sunday Telegraph and The Daily Telegraph back in May of 2013 to stop the so-called rise in the number of children succumbing to preventable diseases because parents are failing to have them fully immunised. The No Jab campaign of fear, lies & Big Pharma propaganda has since turned into No Jab-No Play, No-Pay, it has swallowed up families rights to informed consent & pushed Australia closer to a medical Dictatorship.

In her disgusting & outrageous attack against hard working Aussie parents who simply choose not to vaccinate their own kids, Murdoch Pitbull & Presstitute, Claire Harvey penned one of the most vicious & hateful propaganda pieces in living memory. In the attack piece, Claire Harvey: Anti-vaxers, you are baby killers she labels parents of unvaccinated & healthy children, Killers & terrorists.

WOULD you kill a baby today? Would you put him through horrific pain? Would you take away his oxygen and let him suffocate to death? Well, if you haven’t vaccinated your own children, you are doing all those things. You killed four-week-old Riley Hughes, who died this week.

And yet the anti-vaccine terrorists are allowing biological weapons — those deadly diseases — to thrive because they won’t have their own children immunised.

According to Harvey, simple childhood conditions like Measles & chicken pox that most of us had in our childhood are now Biological Weapons. I remember as a kid copping a dose of the Chicken Pox &  staying home for a few days with TV & ice cream but i never knew at that time i was infected with a Biological Weapon?

All these ridiculous articles show is a very clear intent to scare the general population into vaccinating by pumping out vicious, unfounded, unscientific nonsense & hey, fear sells. Dr Rima Laibow who has over 40 years experience in real vaccine science & the damage they cause wrote a magnificent rebuttal Dr. Rima Replies: Vaccine Conscientious Objectors Are Not Baby Killers!  In which she nails down some actual facts about vaccines. 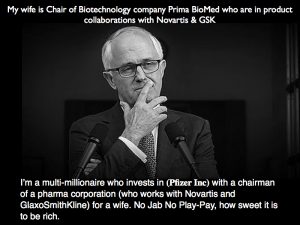 The media love to blame evil Anti-Vaxxers for dangerous & potentially deadly vaccines that have not only failed but seem to be making diseases more Prevalent. In the article, Recently Vaccinated Kids Are Spreading Whooping Cough Everywhere  We can see that Children and Adults are Transmitting Pertussis With Few or No Symptoms.

A study conducted by public health officials evaluated reported pertussis cases in the U.S. between 2006 and 2013 among children under age one and revealed “the emergence of siblings as the major reservoir of infection.” The researchers concluded that infants are more likely to get whooping cough

from their brothers and sisters than from their mothers. When a source of pertussis infection was known (in 44%  of infant cases), it was 36%

The mainstream media in Australia continue to blast parents of healthy & unvaccinated children for Pertussis outbreaks but completely refuse to look at information that states otherwise. In an article from the CDC website entitled, Pertussis Infection in Fully Vaccinated Children in Day-Care Centers The Conclusions State: The effects of whole-cell pertussis vaccine wane after 5 to 10 years, and infection in a vaccinated person causes nonspecific symptoms. Vaccinated adolescents and adults may serve as reservoirs for silent infection and become potential transmitters to unprotected infants.

If a baby contracts Pertussis anywhere in Australia, the media go into a feeding frenzy & immediately lay the blame onto unvaccinated & dirty children who had nothing to do with the initial infection. This fans the fire of contempt against the Anti-Vaccination community & drives our communities further apart using simple propaganda techniques as a weapon.

The simple question has to be asked, why did a mainstream newspaper, The Sunday Telegraph and The Daily Telegraph push so hard to get the Australian Government to implement such Draconian & unnecessary vaccine laws? The answer is very simple as these hateful newspapers are controlled by Newscorp & Rupert Murdoch is Executive Chairman of News Corp, now that makes sense. In the article by Real News Australia, Murdoch’s Daily Telegraph Propaganda Machine Running Overtime

Another so called “Journalist” from the Daily Telegraph, a Murdoch propaganda rag, has written a deplorable story attacking parents who support freedom of choice when it comes to vaccination. This time instead of calling parents “baby killers” and “terrorists” like the Daily Telegraph’s Claire Harvey did, Maria Billias shoots from the hip and calls freedom of choice supporters “child abusers”. 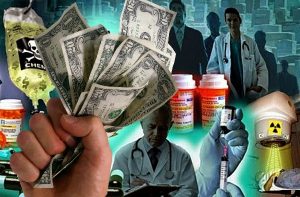 What do all these nasty & vindictive Presstitutes have in common? they are all pushing a Mandatory Vaccination agenda onto our children & the general public. In a vitally important article from Natural News, entitled The vaccine industry OWNS the media and controls everything they say about dangerous vaccines We get a good idea as to why the media are so hell bent of enforcing mandatory vaccination laws & who really funds the bastards.

Robert F. Kennedy stated that the pharmaceutical industry is now the single biggest contributor to advertising revenue to network news divisions, to the tune of $5.4 billion per year.

“A network news broadcast these days … is just a vehicle for selling pharmaceutical products,” he said.

News corp is the largest news and information services provider in the English-speaking world comprising leading newspapers in each of the US, Australia and the UK; integrated marketing services; digital real estate services; book publishing; digital education; as well as sports programming and pay-TV distribution in Australia. Rupert Murdoch uses his newspapers as a propaganda sword in order to pump out an ideology that perfects & strengthens his own agenda, which is making money.

This is a criminal conspiracy of the highest order & totally agenda driven but who ultimately pays at the end of the day for this? The Australian people do through the loss of civil liberties, the unflinching attack against informed consent & the ugly propaganda campaign that strips parents of the right to personal knowledge. As a parent of a completely healthy & unvaccinated child, I can see Australia slipping & sliding into a full-blown medical tyranny where parents rights over their own children will be smashed away & mandated by the state, Big Brother. Loving parents will be prosecuted & have their children taken for child abuse, neglect & for also putting the entire community at risk by not vaccinating their kids.
There is still time to fight this insanity but that means we all need to stick together to fight for the greater good which means protecting our civil liberties, rights to informed consent & our god given rights to thrive & prosper without being terrorized into conforming by an Orwellian Police State.
For a better understanding of Malcolm Turnbull’s dealings, Please read: Turnbull Pushes Mandatory Vaccination Rollout But Has Lucrative shares In Big Pharma
Poll: Turnbull & His Wife pushing Mandatory Vaccination To further Their pharma Investments. Yes/No?

Welcome To The Medical Dictatorship Of Australia. 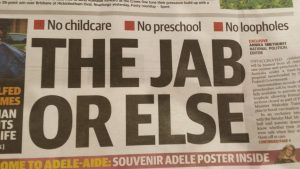