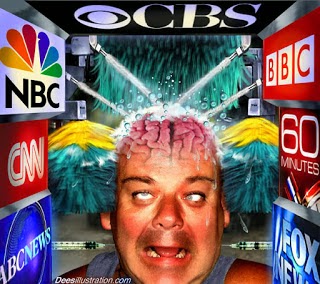 The mainstream media in the US has become a universal joke. Even those who regularly watch a given mainstream news channel will openly admit that every channel has obvious bias, and then justify their viewing it by saying, “but that is why I watch bothchannels; to hear both sides.”

This has become the common answer to how an American stays informed in this age of blatant pandering andmisinformation. What should be shocking to anyone who can stand back and remember the honor-bound public service that was originally envisioned of media, is that the obvious bias has become so pronounced and commonplace that it is now an accepted part of the process. Many would propose that the news had never lived up to those grandiose idealistic pillars of impartiality and morality that were visualized, and that may indeed be the case. Yet that does not change the fact that these people were given a mandate they have failed to live up to, and likely never even feigned an attempt at — once they recognized the value of selling their interests to the highest-bidding corporate sponsor.

This country’s biggest misconception is the simple concept that a viewer can be given two politically-charged options on television, of which both are openly and fiercely biased to their sponsors’ interests, and can then watch both these compromised sides and walk away fully informed. Deep down, most already know this to be a false security, yet do not want to admit it to themselves for fear that the admission would then cast doubt on their entire lifetime of commitment and acceptance of this broken system.

Most continue to participate in this façade because they are falsely led to believe that there are no other options; that this system is the pinnacle of thousands of years of development building toward a better system of democracy. Well sadly, that is not the case. This country has not been a democracy for a very long time, and that fact has become quite a bit more pronounced in recent years with the rise of the police state, the infiltration of the medical industry, the continual erosion of every American’s constitutional rights, and the defrauding of the election process.

A democracy is defined as:

Government by the people; a form of government in which the supreme power is vested in the people and exercised directly by them or by their elected agents under a free electoral system.

A oligarchy is defined as:

A form of government in which all power is vested in a few persons or in a dominant class or clique; government by the few.

Even to a child, it is quite clear which of these two are being practiced in the US. All one must do is take a look at the non-existent middle class to see that this country is being ruled by an élite run oligarchy; or at the very least, a plutocracy orcorporatocracy, both of which more accurately represent what Americans are experiencing in this country. For all those who only believe something once a scientist is paid to produce the corresponding result, this same conclusion, of the false sense of democracy, was actually reached scientifically by Princeton and Northwestern universities. United Press International reported the study found that:

The U.S. government now represents the rich and powerful, not the average citizen.

In the study, “Testing Theories of American Politics: Elites, Interest Groups and Average Citizens,” researchers compared 1,800 different US policies that were put in place by politicians between 1981 and 2002 to the type of policies preferred by the average and wealthy American, or special interest groups. Researchers then concluded that US policies are formed more by special interest groups than by politicians properly representing the will of the general people, including the lower-income class.

“The central point that emerges from our research is that economic elites and organized groups representing business interests have substantial independent impacts on U.S. government policy, while mass-based interest groups and average citizens have little or no independent influence,” the study found.

“When a majority of citizens disagrees with economic elites and/or with organized interests, they generally lose.”

Corruption is Legal in America

Many forget that this nation was originally founded as a republic, which was supposed to give all the power to the people themselves. If one chooses to overlook the rampant voter fraud taking place this year, the disproportionate allotment ofsuper-delegates following the primaries, redistricting or gerrymandering, and the inherent undemocratic process of the electoral college, then a republic has a way of appearing like this country’s style of government. Yet once these are all taken into account, a state in which “supreme power” rests in the hands of a the citizens, does not seem anything like what is seen today.

A republic is defined as:

A state in which the supreme power rests in the body of citizens entitled to vote and is exercised by representatives chosen directly or indirectly by them.

One can clearly see that this form of government, the form which the nation’s founding fathers set forth to protect the future of American liberty, was originally chosen as the best way to ensure the rights of Americans. As one can clearly see, a republic is not only a far cry from what Americans actually experience, but quite possibly was never practiced outside of the few idealistic moral-bound men who led the charge to American freedom. History has shown that those men were the minority in that historical room, yet they were the dominate voice. Since that time, that voice has faded, and a more sinister and profiteering voice has risen to fill its place.

In this video, CNN’s Anderson Cooper is shown on-air defending Hillary Clinton’s actions in her 1975 court-appointed defense of an accused child rapist. Audio recordings of Clinton discussing this case are included, recorded in the early 1980s, in which Clinton described how she used a legal technicality to plead the accused man down, and laughed as she said her client passed a polygraph test which “forever destroyed” her faith in lie-detecting machines. Defending Clinton’s actions, Cooper stated that CNN did not have any “corroboration” of the story — when in fact CNN’s The Lead reported on this story in June 2014.

***Note from the Editor: Thank you to BestPoliticalVideos for the above video. Despite it’s rousing endorsement of Republican candidate Donald Trump at the end, which neither The Last American Vagabond nor Wake Up World supports, this video is a great example of the blatant lies that are perpetuated, and the wildly unprofessional political bias that goes unchecked, on mainstream television.***

The Illusion of Democracy

***Thank you to MassReport for this excellent video.***

Ryan Cristian worked for a degree in culinary arts, but quickly developed a deep concern about the state of our food and how it’s produced — so much so that it prompted him to start the The Last American Vagabond website to voice his concerns. As both a writer and editor, Ryan has made it his mission, and the mission of his website, to bring to light the rampant injustice and malfeasance currently ingrained within the inner workings of American government. By allowing a free flow of information in regards to issues that are being purposefully and discreetly culled by those who stand to lose both financially and professionally, he hopes to bring about awareness to the issues of the most paramount importance.

You can connect with Ryan at:

“Living is easy with eyes closed, misunderstanding all you see.” – John Lennon