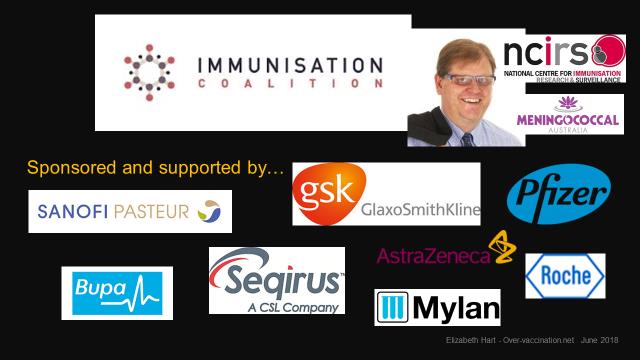 More Info: The Censorship of the Vaccination Debate in Australia Today

Please see below my recent email to Professor Andrew Wilson, Chair of the Pharmaceutical Benefits Advisory Committee, re the current aggressive lobbying via the media for meningococcal B vaccination to be added to the taxpayer-funded schedule.

Meningococcal B vaccination is shaping up to be ‘HPV Mk II’, i.e. being fast-tracked in the same highly questionable manner.  The influence of the scientifically unsound 2004 Jefferson et al aluminium and vaccine safety review also hovers over the aggressive promotion of these aluminium-adjuvanted vaccine products, we so need retrospective analysis of the influence of that WHO-funded review… But there are people who appear to be determined to keep this covered up…
Elizabeth
For the attention of:
Professor Andrew Wilson
Chair, Pharmaceutical Benefits Advisory Committee (PBAC)
Dear Professor Wilson
It’s highly alarming that an aggressive media blitz is underway, lobbying for meningococcal B vaccination to be added to the taxpayer-funded schedule[1], despite the PBAC’s previous rejection of meningococcal B vaccination three times for the NIP.
Is this the way vaccination policy is being decided in Australia, at the behest of pharmaceutical industry lobbying via the media until they force their lucrative vaccine product onto the schedule?
In regards to another submission to the PBAC for the Bexsero meningococcal B vaccine product, a recent article in the Courier Mail reports “A spokesperson for manufacturer GSK said it had tightened its submission, including new data on the vaccine’s proven effectiveness overseas”.[2]
What is the substance of this ‘new data’?  Has it been independently and objectively assessed?  Is it openly accessible for public perusal?  Can you please provide me with information about this data?
Also, the Bexsero meningococcal B vaccine product has an aluminium-adjuvant. I have questioned the evidence backing the safety of the ever-increasing load of aluminium-adjuvanted vaccine products and revaccinations being pressed upon children, e.g. in my email to Kristine Macartney, Director of the National Centre for Immunisation Research & Surveillance, see this link: https://elizabethhart.files.wordpress.com/2019/05/gmail-questionable-claims-for-the-safety-of-aluminium-adjuvanted-vaccine-products-email-to-professor-kristine-macartney-ncirs.pdf  I forwarded my email to Professor Macartney in March 2019, but received no response. I also brought this matter to your attention in April 2019 Professor Wilson.
It is also an extremely serious matter that the conflicts of interest of people at the forefront of campaigning for meningococcal B vaccination are often not being properly disclosed to the public in the recent spate of publicity supporting mass vaccination against very rare invasive meningococcal disease.
For example, ABC World Today failed to properly disclose the conflicts of interest of both Robert Booy and Terry Nolan in their report relevant to vaccination policy i.e.: Experts concerned Australia’s vaccine program lagging behind Tuesday 9 July 2019: https://www.abc.net.au/radio/programs/worldtoday/experts-concerned-australias-vaccine-program-lagging-behind/11291418
Robert Booy is Chair of the Immunisation Coalition, an organisation which promotes vaccine products and which is funded by vaccine manufacturers, i.e. GlaxoSmithKline, Pfizer, Seqirus (a CSL company), Sanofi, and MSD (aka Merck). Robert Booy is also the medical advisor for Meningococcal Australia, an organisation which lobbies for meningococcal vaccine products to be added to the taxpayer-funded National Immunisation Program Schedule, and which receives funding from meningococcal vaccine product manufacturers GlaxoSmithKline and Pfizer. Robert Booy has been lobbying for the Bexsero meningococcal B vaccine product to be added to the taxpayer-funded schedule for years, see for example the Medical Observer articles ‘Call to fund Meningococcal B vaccine’ (July 2015), and ‘Meningococcal B vax rejection a bad move: expert’ (August 2015.) (Robert Booy is also a member of the TGA’s Australian Influenza Vaccine Committee, the webpage for which currently does not disclose his conflicts of interest.)
Robert Booy has also been associated with the National Centre for Immunisation Research and Surveillance for years, and I suggest his links with industry funding via his research at the NCIRS should be publicly disclosed. 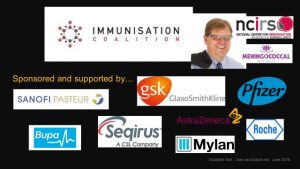 Robert Booy certainly has some Big connections with Big Pharma
In regards to Terry Nolan, he was previously Chair of the Australian Technical Advisory Group on Immunisation, and I understand he has also been involved with the Bexsero meningococcal B vaccine, e.g. when it was first developed with Novartis.[3] Terry Nolan is associated with the Murdoch Children’s Research Institute, an organisation which is involved in vaccine development, with funding from GlaxoSmithKline, SanofiPasteur and Novartis Vaccines. The Murdoch Children’s Research Institute was originally co-founded by Rupert Murdoch’s mother, Dame Elisabeth Murdoch. This organisation, which is involved in vaccine development, also receives funding from the Murdoch-run News Corp and Foxtel. It’s significant that Murdoch-run newspapers such as the Daily Telegraph campaigned for coercive vaccination laws via their ‘No Jab, No Play’ campaign, which was subsequently obligingly embraced by politicians such as Tony Abbott, Bill Shorten and Richard Di Natale, and enacted as the ‘No Jab, No Pay’ law in January 2016 while Malcolm Turnbull was Prime Minister. As far as I’m aware, the News Corp newspapers did not, and still do not, disclose their conflict of interest in also being associated with the Murdoch Children’s Research Institute.
Given the conflicts of interest of Robert Booy and Terry Nolan, I suggest it’s misleading for ABC World Today to report that “…Professors Nolan and Booy have independently backed suggestions for a government rethink”  about the way the government and the PBAC decide which vaccines to fund.
Despite the rare cases of invasive meningococcal B being highlighted in the media, even the GSK and Pfizer funded Meningococcal Australia website acknowledges that “Meningococcal bacteria can live harmlessly in our throat and nose. Around 20% of people will be carrying these bacteria at any one time without ever becoming ill (‘healthy carriers’). In fact, all of us will carry them at some stage in our lives.” http://www.meningococcal.org.au/new-page-1
Do the rare cases of invasive meningococcal B justify the fear-mongering about this disease in the media, including in the newspapers run by News Corp, which is also associated with the vaccine developing Murdoch Children’s Research Institute?
If meningococcal B vaccination is added to the National Immunisation Program Schedule, will it be mandated for children under the No Jab, No Pay, and No Jab, No Play laws?  Is it ethical to mandate a vaccine product for a bacteria which is generally harmless?
Instead of promoting mass vaccination against a bacteria which is generally harmless, would it not be more valuable to investigate why invasive meningococcal disease strikes so few, and what could be the drivers behind this? Particularly if it’s possible that the implementation of vaccination might result in the emergence of new strains, e.g. as suggested by Norman Swan on the ABC Health Report, i.e. “Has immunisation caused the problem, in a sense? In other words, that there is an ecological niche, if you like, for meningococcal infection. You get rid of C because of immunisation, then B emerges, then C and W and Y, because there’s just an empty space for it to inhabit, a bit like sparrows…[4]
There are many uncertainties about vaccination, including the unknown cumulative effects of repeated revaccination with aluminium-adjuvanted vaccines, and possibly deleterious effects with being vaccinated regularly throughout life.
Professor Wilson, I again register my alarm at the way vaccination policy is being manipulated by vested interests in Australia, e.g. the recent example of aggressive lobbying via the media for meningococcal B vaccination to be added to the national taxpayer-funded schedule.
I request your response to the matters raised in this email.
Sincerely
Elizabeth Hart
Independent citizen investigating conflicts of interest in vaccination policy and the over-use of vaccine products.
FYI, please see below my transcript of the ABC World Today segment relevant to vaccination policy:

TRANSCRIPT – Experts concerned Australia’s vaccine program lagging behind
Introduction: Australia is responsible for one of the world’s most advanced systems for vaccine funding that’s led to one of the highest immunisation rates in the world. But health experts are now warning that we’ve begun to lag behind other developed countries, and they say it’s stopping Australians of all ages from receiving potentially life-saving injections, as Alison Branley reports.
Alison Branley: 28 year old Juttima Chinnasri went home sick from work in October last year. By the next morning her face was covered in a purple rash.
Juttima Chinnasri: It wasn’t normal, like, it’s serious.
Alison Branley: She ended up spending a week on life support. When she woke, her lower legs and fingers were black and doctors told her they’d need to be amputated.
Juttima Chinnasri: At that point it was just like it’s just hopeless.
Alison Branley: Juttima had meningococcal B strain, the most common strain in Australia. There’s been a meningococcal B vaccine available since 2014, but it still hasn’t been funded under Australia’s National Immunisation Program. University of Melbourne population health expert Professor Terry Nolan says it costs up to $150 for each injection.
Terry Nolan: For an infant it’s a three dose course, so it’s a big whack, it’s a lot of money. That particular vaccine is funded in other countries.
Alison Branley: Another vaccine still not funded is Shingrix, which immunises the elderly against shingles, a painful condition that turns up only in people who had chickenpox as children. University of Sydney immunisation expert Professor Robert Booy says because Shingrix isn’t a live virus vaccine, it’s better for people with weakened immune systems. But despite this, it costs sick patients about a hundred dollars for a vaccination.
Robert Booy: Shingles can lead to very severe disease and depression. People who are so severely affected by pain in their face, it can be awful.
Alison Branley: Experts say there’s flaws in the way the government and its advisory committee, which decides which vaccines to fund, calculates cost versus benefit. Professor Nolan says these weaknesses have led to significant delays getting funding for a whooping cough vaccine for pregnant women, the flu vaccine for children under five, and the vaccine to protect against meningococcal types a, c, y and w. The vaccine experts will discuss possible changes at a symposium today in Melbourne. The event is being sponsored by GlaxoSmithKline, the maker of Shingrix and meningococcal vaccines. But Professors Nolan and Booy have independently backed suggestions for a government rethink. Professor Booy says the current system could impact the ability to quickly fund other vaccines in the future.
Robert Booy: We’re not valuing the impact of vaccination for the general population in saving lives and in preventing disability. We’re putting a lower value on vaccines than we are on drugs, like cancer drugs. So it’s not a level playing field. The social impact of immunisation can be really substantial. Preventing transmission within families, within the community, can keep people at work, can substantially benefit the economy and can keep families well.
Conclusion: That’s vaccine expert Professor Robert Booy, speaking to Alison Branley.