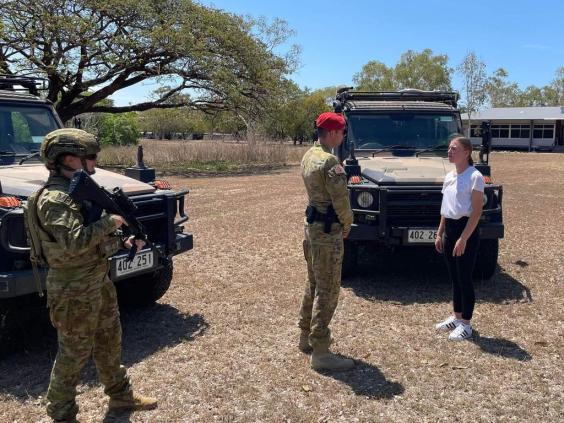 Two M113AS4 Armoured Personnel Carriers are positioned on York Street, one facing east at 30 degrees towards Townsville and the other west towards Hughenden at the same angle.

Police and  Alpha Company 1st Military Police Battalion are pulling over passing vehicles and directing them into the cricket centre presumably for ID checks and breath tests.

Local residents have been ringing local Member of Parliament Robbie Katter and complaining about the MP’s carrying rifles with regular cops on the beat, claiming such an exercise for a week in a country town is unacceptable.

Residents have been warned of urban warfare exercises and gunfire in the surrounding hills and countryside tonight.

Military sources said it was unusual for MP’s to become involved in traffic duties with police and unheard of for MP’s to be doing breath analyses of civilians.

The Military ran a small article in the Townsville Bulletin and Charters Towers local newspaper warning of the exercise a week ago, which it seems few residents have read.

A spokesman for the ADF said the activities will help soldiers prepare to support the civil community within a “stability” environment should they ever be required and all involved are grateful to the Charters Towers community for its support and understanding.

Other military sources said the exercise could be a warm-up for checking vaccine status of all motorists after the Queensland Premier’s planned lock down of un-vaxxed people on December 18.