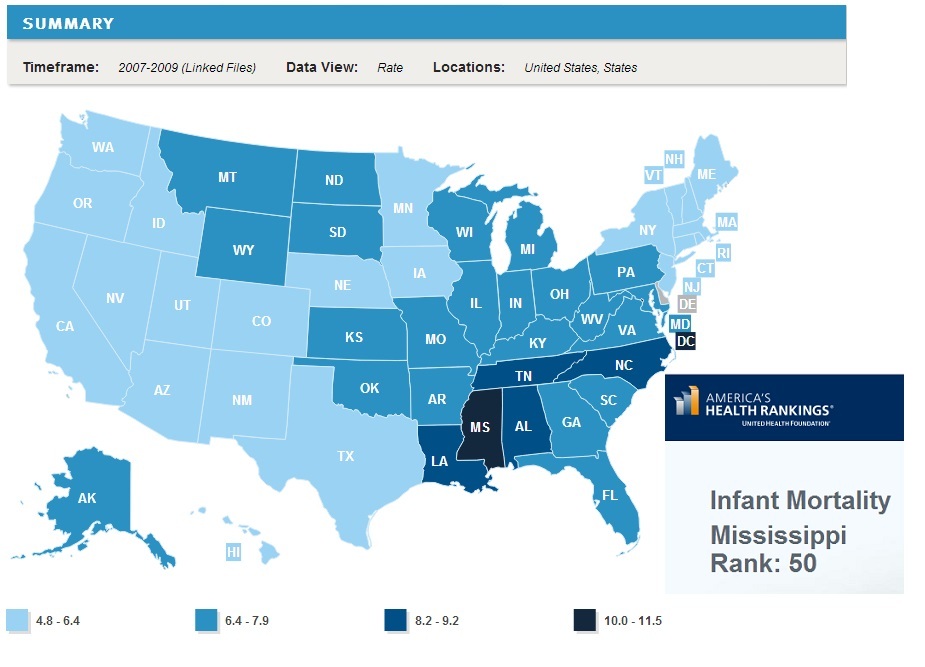 Lindey Magee of Mississippi Parents for Vaccine Rights recently commented on an article published in Mississippi’s Clarion Ledger on their front page: 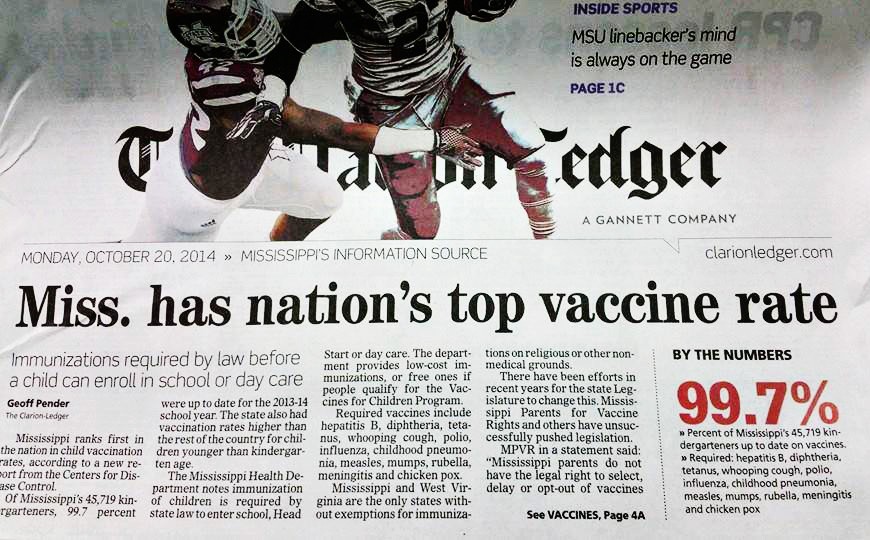 Image from Be The Voice: Mississippi Parents for Vaccine Rights

Mississippi has the highest rate of childhood vaccination because it is one of only two states in the U.S. that does not allow parents a choice regarding vaccines, as a requirement for attending school. Only a medical doctor can provide an exemption, as religious and philosophical exemptions are not allowed.

The Clarion Ledger was obviously proud of their vaccination rates, and many around the country want to follow their model and remove vaccine choice from parents and families.

Lindey Magee, however, does not think Mississippi should be so proud of their vaccination rates, given the fact that Mississippi ranks last in the U.S. with the highest infant mortality rates, and very low scores in other key health figures for children:

To be clear, ranking as the most highly vaccinated state is NOT something to be proud of.

More educated states are seeing more and more parents opt out of some of the 49 doses of vaccines administered to our children before kindergarten. Ranking first in vaccination compliance only indicates that Mississippi families are being exploited for its reputation of ignorance and lack of education.It is an embarrassment, not a badge of honor.

As citizens of this state, it is time we take notice of our state’s archaic vaccine law. As it is now, the state of Mississippi requires children first be vaccine-injured before a parent can begin the uphill, long battle to secure said injured child from further damage. That is barbaric! Meanwhile, forty-eight other healthier states provide religious and/or philosophical vaccine waivers.

While we have the highest vaccination rates, Mississippi also has the highest infant mortality rate in the U.S. Keep in mind that the U.S. is the most highly vaccinated country in the world; now consider that as a nation, our infant mortality rate falls below 27 other wealthy countries-some of which do not even mandate vaccines at all! Mississippi has the most highly vaccinated pediatric population IN THE WORLD.Why then are we the LEAST healthy? Yes, poverty and crap food, etc. plays a part, but too many vaccines too soon cannot be ignored.

I implore those who buy into this “vaccines must be mandated” notion that uses seriously dangerous diseases like polio and smallpox to sell 30+ doses of vaccines to all babies by six months to reexamine the topic. I was born in 1979 and received 10 doses of vaccines by high school. Where will it end? Mandated medicine is a slippery slope and is affecting a generation of over-vaccinated children! (Source.) 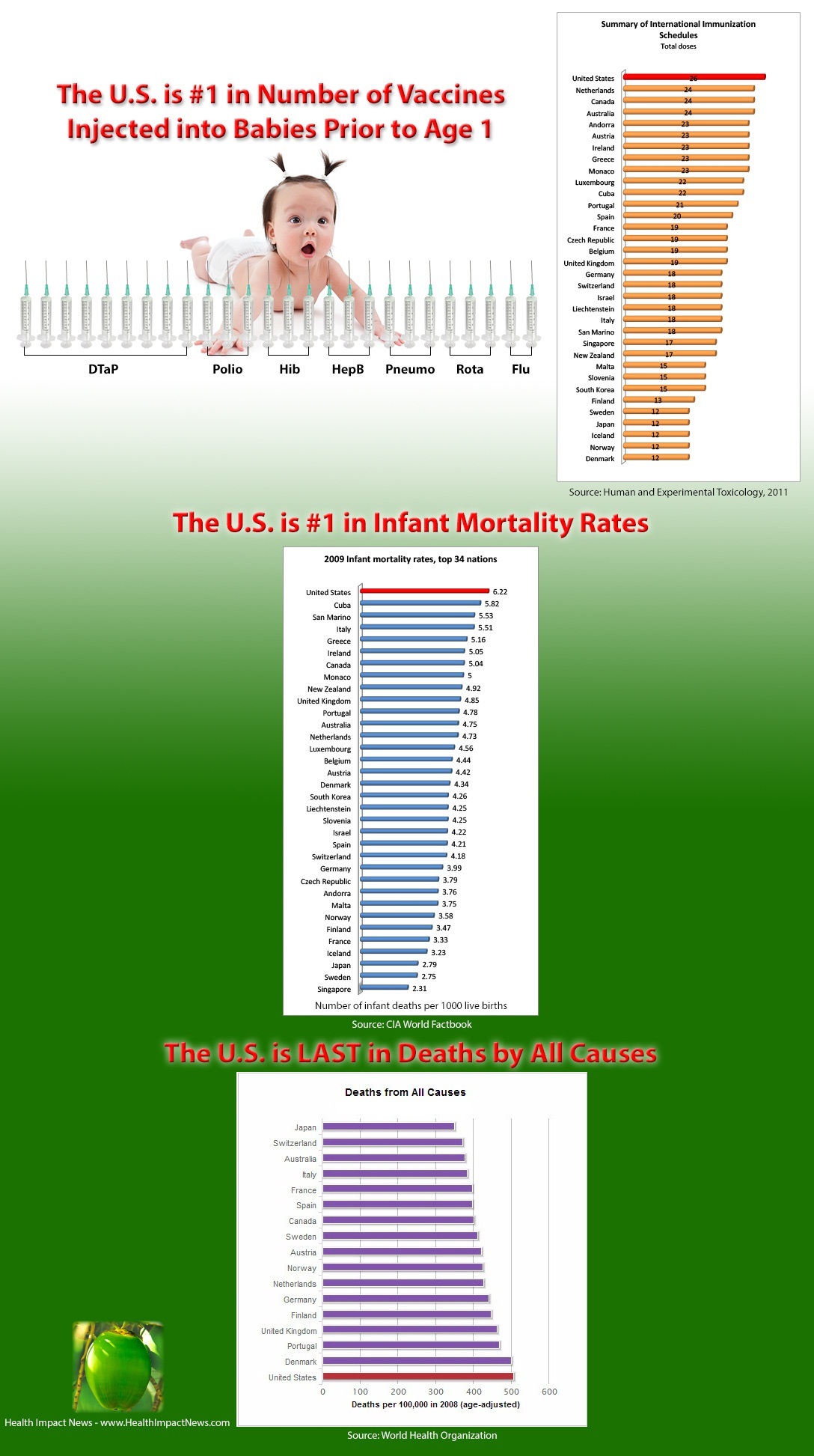 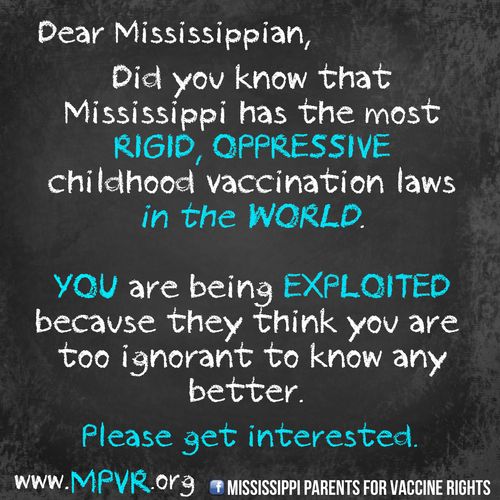