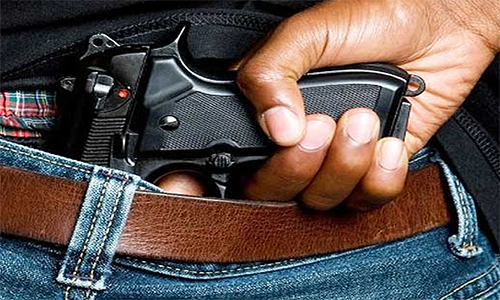 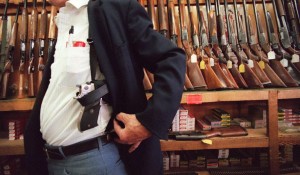 The legislation, which goes to Democratic Gov. Jay Nixon, was among the most prominent measures passed by the Republican-led Legislature on the final day of its annual session.

Under the measure, most people could carry concealed guns, even if they haven’t gone through the training now required to get a permit. The legislation would also expand the state’s “castle doctrine” by allowing invited guests such as baby sitters to use deadly force against intruders. And it would create a “stand-your-ground” right, meaning people would have no duty to retreat from danger in any place they are legally entitled to be present.

Nixon said he would give the bill a “full and comprehensive review” before deciding whether to sign it. But he added: “This is a significant shift from the framework we’ve used in this area to give people the lawful right to carry.”

Republican supporters described it as a reasonable approach to personal safety, while many Democrats decried it.

“There won’t be blood in the streets,” said Republican Rep. Joe Don McGaugh, of rural Carrollton. “But what there will be is more people protected by the right to bear an arm legally.”

Missouri lawmakers also gave final approval to a bill bringing the state’s law on deadly force by police into compliance with a U.S. Supreme Court ruling from 30 years ago. The outdated law — which doesn’t specify that suspected felons must be dangerous — gained national attention when Ferguson police officer Darren Wilson fatally shot Michael Brown in August 2014.

Grand jurors were initially given the old law before prosecutors supplied them with updated guidelines. Wilson, who is white, was not charged for shooting the unarmed, black 18-year-old by either state or federal authorities. Wilson resigned from the Ferguson department.

Nixon was among those calling upon lawmakers to update Missouri’s law on police force. But he had not sought the other gun-law measures.

Ten other states already have what supporters describe as “constitutional carry” allowing concealed guns without permits, including legislation enacted this year in Idaho, Mississippi and West Virginia, according to the National Rifle Association.

The NRA says 30 states have laws or court precedents stating people have no duty to retreat from a threat anywhere they are lawfully present. But Missouri’s measure would make it the first new “stand-your-ground” state since 2011, according to both the NRA and the opposition group Everytown for Gun Safety.

Florida’s “stand-your-ground” law came under national scrutiny after neighborhood watch volunteer George Zimmerman fatally shot unarmed teenager Trayvon Martin in 2012. Zimmerman was acquitted of all charges and, while “stand your ground” was not directly mentioned in his trial, the law was included in the jury instructions.

Several Missouri Democratic lawmakers cited Zimmerman’s case while raising concerns that the legislation could lead to a shoot-first mentality and dubious self-defense claims.

“It doesn’t make the state safer, it opens it up to murder,” said Democratic Rep. Brandon Ellington of Kansas City, chairman of the Missouri Legislative Black Caucus.

The legislation passed the Republican-led Senate on a 24-8 party-line vote. The House then gave it final approval 114-36, with a little over an hour remaining before the session’s mandatory end.

The final day of Missouri’s session typically is a fast-paced affair. But senators who worked late the night before did not bring up the gun legislation Friday until after first finishing a free lunch sponsored by many of the state’s largest utilities and lobbying firms.

Senators adjourned well before the mandatory quitting time without acting Friday on a House bill that would have banned most lobbyist gifts besides meals to which all lawmakers and statewide elected officials are invited. The bill was a priority both for Nixon and new Republican House Speaker Todd Richardson, who took over after his predecessor resigned amid a sexually charged texting scandal with an intern.

Other bills that fell by the wayside Friday included several imposing additional abortion restrictions and another that would have asked voters to raise the fuel tax by nearly 6 cents a gallon to generate more than $235 million annually for state and local roads and bridges.