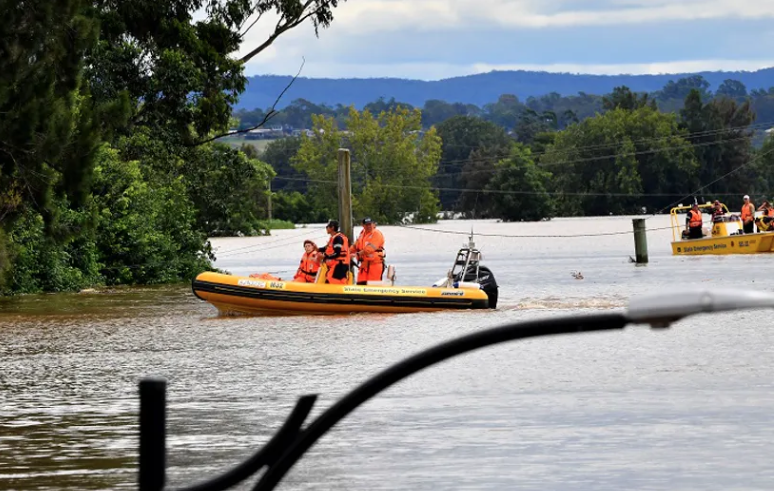 ‘It’s frustrating to think we are forgotten…’ said a member of the Mullumbimby community, after they were left without government help for five days.

What the Premier should have said is, ‘Sorry, the government has utterly failed the people of Mullumbimby and we will sack the people responsible.’

Instead of sacking incompetence, the government is more interested in sacking the unvaccinated. The State Emergency Services (SES) were widely (and rightly) mocked on social media during the recent floods for insisting that volunteers wanting to help sandbag homes had to be vaccinated and RAT tested – according to a Sky News Australia report.

Those that have spent time in floodwater know that Covid is the least of their worries. The stuff lurking in the wet and the mud is more sinister than anything that’s crawled out of a Wuhan lab. No, you’re not going to be made to wear PPE to protect you from waterborne pathogens. That would be silly. Just don’t stand next to an unvaccinated person with sandbags. That would be dangerous.

The SES have clung to Covid health orders, turning volunteers away during a crisis even though vaccine mandates are in the process of being dropped around Australia. In New South Wales, citizens can go to most restaurants and retail outlets, catch public transport, and congregate.

The SES Covid policy falls in sharp contradiction to scenes posted on social media of citizens helping to rescue each other from rising floodwaters. These people are not ‘checking in’ with the rescue boats, wearing sodden masks, or making people linger on soon-to-be submerged rooftops until a RAT test comes back negative. There are no ‘vaccinated only’ life rafts or segregated areas. Away from the glare of government overreach, Australians are just people without ‘ticks’ and ‘crosses’ hanging over their heads.

It is not as if the SES brought their policy in at the beginning of the pandemic when less was known about the inefficiencies and failings of the vaccine. Unvaccinated emergency workers were forced out of their jobs in October 2021.

Experienced, loyal, fit, and healthy volunteers hung up their boots and high-vis jackets forever. Unsurprisingly, the SES have done nothing but complain about being critically understaffed and overstretched during the floods. No, they did not invite their unvaccinated staff back to help out. Saving lives, it seems, takes a back seat to vaccine mandates.

This ridiculous siltation was on full display in the New South Wales town of Mullumbimby. Landslides cut paths of destruction through the area, dragging homes from their foundations and moving them hundreds of metres down mountainsides. Access roads were blocked off under metres of mud and debris. The severity of the floods was shocking.

Despite state officials being able to marshal the Army and anti-terror police at a moment’s notice to squash Freedom Protesters, when it came to an actual emergency, the response was non-existent. The residents of Mullumbimby were essentially left to fend for themselves, forgotten by emergency services leading locals to make desperate pleas on social media for help.

This social media claim is contested by the Byron Shire Council deputy mayor, who insists that SES and the Fire and Rescue agency were coordinating some of the rescues.

For five days, Mullumbimby went without power, food, fuel, clean water, or proper communication. According to reports, residents had to rely on UHF radios and there was no sign of emergency services. Due to the scale of destruction, many residents were unable to evacuate and ended up trapped in their homes – some of them elderly and in remote locations.

‘There’s no police here, no help, it’s just volunteers. There are landslides, and regular people are trying to scale cliffs to rescue people, babies and families. We need the army, we need police, we need services. So many people are missing.’

The plea for help went viral, along with images showing hundreds of trees laying across access roads that looked as if they had been pushed down by a giant.

While the SES complained that remote areas were difficult to reach, at least 30 volunteers answered the town’s call for help, with many travelling from Queensland.

‘At one moment I turned around and there’s an army of faces I’ve never seen, and it’s quite emotional to see this help, and very organised with all the gear. And I was like, “Wow, humanity is good. People are wonderful,”’ said local Mullumbimby man, Bruce Faber.

Help also came from the air, with Oceanview Helicopters (stationed on the Sunshine Coast) sending pilot Karl Mayne. He spent more than three days and 15 hours dropping supplies to the desperate town in the absence of government support.

It was only after The Weekend Australian put the story up that police response units started arriving. Police tentatively picked their way through the remains of Mullumbimby later that afternoon. Several days earlier, the only police presence in the area was a highway patrol car checking to see if any of the desperate residents or volunteers were speeding. The patrol car is reported to have driven off when photos were taken. Perhaps they were embarrassed… And so they should be. The police have done little to recommend themselves during the last two years of Covid – etching unforgivable images into the Australian psyche.

With no government interference, hundreds of locals and volunteers had gathered by Friday and organised themselves into work teams to search difficult terrain for missing residents. The speed and efficiency of their operation stunned seasoned emergency service workers, who described Mullumbimby’s residents as an ‘army’.

‘I’ve never seen that level of community engagement operating in such a functional way in my career. They’re running like an army,’ said the Captain of the Mullumbimby Fire and Rescue, Josh Rushton.

They shouted out tasks and sent off workers without delay. Everything from short physical tasks to arduous rescue operations took place without complaint.

Despite not being ‘officially’ trained, the locals performed rescues and located the body of a man who tragically died in the flood.

One of these rescue crews named themselves ‘Bentley’s Crew’ in honour of their dog escort which belonged to a 70-year-old man rescued from a remote property.

The bravery and community spirit of Mullumbimby puts the bureaucratic behaviour of the SES and other government services to shame. Mullumbimby, with one of the lowest vaccination rates in Australia, is full of sacked emergency workers whose skills, obviously, should have been utilised by the government instead of being unceremoniously scrapped.

If Australia doesn’t get serious about the value of its citizens and instead keeps focusing on politically charged health orders, it will never survive a war, let alone win one.

As for Mullumbimby – bravo to the town that saved itself and to the ordinary men and women who made the dangerous journey to help them out.