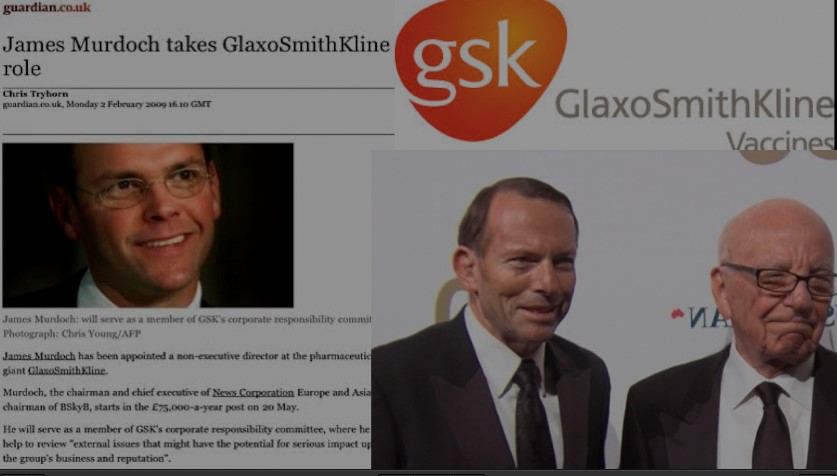 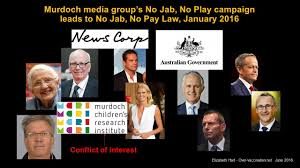 I have previously outlined the Murdoch media/News Corp’s conflict of interest in its promotion of the GSK Bexsero meningococcal B vaccine product, i.e. News Corp’s association with the Murdoch Children’s Research Institute which is involved with GlaxoSmithKline/Novartis-funded research on the Bexsero meningococcal B vaccine product. (See my email to you dated 13 August 2019).

It’s appalling that the deeply conflicted Murdoch media/News Corp continues to campaign to undermine the supposedly independent Pharmaceutical Benefits and Advisory Committee, and its evaluation of vaccine products for the taxpayer-funded vaccination schedule.

This whole matter is disastrously compromised by conflicts of interest, particularly the lobbying of the deeply conflicted Murdoch tabloids and Prime Minister Scott Morrison’s promotion of this Murdoch-associated GlaxoSmithKline vaccine product, which is likely to generate billions of dollars’ worth of global sales if it is added to vaccination schedules around the world.

Reporting on the Federal Election outcome this year, The Sydney Morning Herald asks “Did the Murdoch press sway the election?”, noting that former Prime Minister Kevin Rudd said: “Murdoch, with 70 per cent control of Australia’s print media, ran the single most biased campaign in Australian political history. Reason for the silence? People are in fear or Murdoch’s power”.[1]

Jane Hansen’s ‘Dear Prime Minister, please stop this killer’ article reports on Prime Minister Scott Morrison’s response, in which he seems to take for granted that the GSK Bexsero meningococcal B vaccine product is a ‘magic bullet’ to prevent this disease. Scott Morrison says: “We want to do everything possible to help all those people who face meningococcal and we’ll get it listed on the National Immunisation Program as a matter of priority as soon as the independent doctors (on the PBAC) who make the decision on its effectiveness give it the green light”. (My emphasis.)

Professor Wilson, is Mr Morrison pre-empting the PBAC’s decision here? It seems you are under significant political pressure to add the GSK Bexsero meningococcal B vaccine product to the taxpayer-funded schedule. It’s a serious matter that the PBAC is being lobbied by the Murdoch media and Prime Minister Scott Morrison to add the GSK Bexsero vaccine product to the taxpayer-funded schedule, the ‘independence’ and objectivity of the PBAC is now seriously compromised. The quality of the data you are considering in your review of this product is also in question – is this independent and objective data, or is it associated with the vaccine manufacturer GlaxoSmithKline/Novartis? I have asked you previously if this data is openly accessible for public perusual, but received no response.

Jane Hansen’s article, notes “The Sunday Telegraph has campaigned to get Bexsero on the free schedule because it has been registered by the Therapeutic Goods Administration as safe and effective to help prevent invasive meningococcal B disease since 2013.” (My emphasis.)

This raises the question, how did the TGA register the GSK Bexsero meningococcal B vaccine product as being “safe and effective to help prevent invasive meningococcal B disease” when, according to the PBAC July 2015 outcomes document:

“The PBAC rejected the re-submission requesting listing of the 4CMenB vaccine on the NIP Schedule for the prevention of meningococcal B disease in infants and adolescents. The basis of the rejection was that the re-submission did not address multiple uncertainties in relation to the clinical effectiveness of the vaccine against the disease when delivered in a vaccination program, that the use of optimistic assumptions about the extent and duration of effect and herd immunity as raised by the PBAC in previous consideration of this vaccine were not addressed, and the unacceptably high and uncertain ICER, presented in the re-submission.” (My emphasis.)

The PBAC also rejected the clinical claim: “superior in terms of comparative effectiveness, with an acceptable tolerability profile in infants and adolescents”, saying

“Not accepted. The PBAC reaffirmed its November 2013 and July 2014 conclusions that the vaccine is effective in inducing antibodies against the component antigens of 4CMenB. However, in the context of a population-based intervention against invasive meningococcal B disease, the Committee considered the clinical claim was highly uncertain because of the likely short persistence of the antibody response in children, uncertainty about the correlation between antibody responses and protection, the unknown effect on carriage of the bacteria, the overall uncertain long-term protective efficacy against infection and disease, and the unknown influence of projected herd immunity effects on overall disease burden. These issues were not addressed in the resubmission, although the PBAC acknowledged the limitations of the evidence base”.(My emphasis.)

The PBAC also rejected the economic claim: “cost-utility analysis against no vaccination”, saying:

“Not accepted. The PBAC noted that the submission had not addressed the previous concerns of the PBAC in regards to the model, namely uncertain and optimistic assumptions about the extent and duration of effect and herd immunity. The PBAC was also concerned with the discounting rate applied in the model that considerably favoured the 4CMenB vaccine. The PBAC considered that none of the proposed program options were cost-effective as presented in the submission”. (My emphasis.)

Given the ‘multiple uncertainties’ identified by the PBAC, how did the TGA previously conclude that the GSK Bexsero meningococcal B vaccine product was safe and fit for its intended purpose?[2] Of course the TGA is conflicted too, as this ‘regulatory body’ is funded by industry.[3]

The TGA’s registration of the GSK Bexsero vaccine product and the PBAC’s current supposedly ‘independent’ evaluation of this product is a debacle, this whole matter is disastrously compromised by conflicts of interest, including the lobbying of the deeply conflicted Murdoch tabloids and Prime Minister Scott Morrison’s promotion of this Murdoch-associated vaccine product.

Professor Wilson, with serious conflicts of interest shrouding vaccination policy, the entire evaluation process for taxpayer-funded vaccine products must be subjected to urgent review, particularly in light of Federal and State governments now mandating these ever-increasing vaccination and revaccination medical interventions for children to access benefits.

I request acknowledgement of this email and your urgent response to the matters raised in this and my previous emails.

1. ‘Unrelentingly partisan’: Did the Murdoch press sway the election? The Sydney Morning Herald, 25 May 2019.
2. “The TGA is responsible for ensuring that therapeutic goods available for supply in Australia are safe and fit for their intended purpose.” What the TGA regulates webpage (current as at 22 August 2019).
3. TGA – Fees and payments webpage (current as at 22 August 2019).