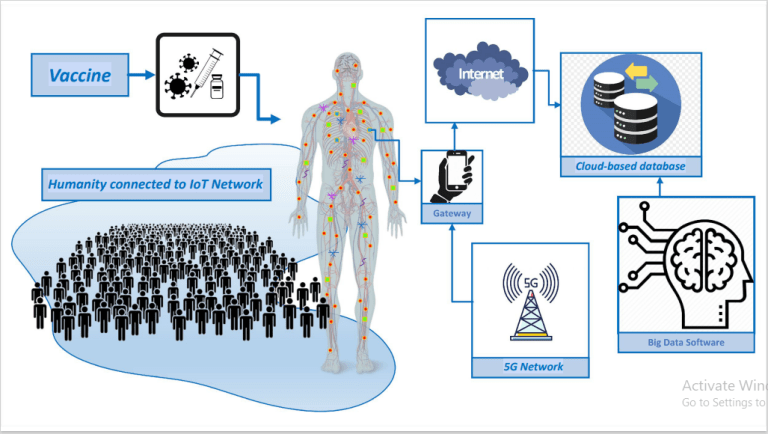 BREAKING: A new scientific report by La Quinta Columna (The Fifth Column) was released on December 22nd, revealing what COVID-19 is. After an accumulation of over 20,000 hours of research by multiple scientific teams, they deduce that Covid-19 is the result of GRAPHENE Enhanced Acute Irradiation Symptom.

All the nanotechnology introduced in the vaxxines and their final purpose, as well as the exotic phenomena that emerge from it has been identified and confirmed using multiple scientific lab analysis procedures.

Yesterday we published a video by La Quinta Columna showing the “nano-octopus” and other microparticles found in Covid injections which seemed to be self-assembling.  As a follow on, this article points to scientific research which offers an explanation why Covid injections contain those “things.”

A paper published in the Journal of Communications, January 2021, provided an in-depth review of the Wireless Nano-Sensors Network (“WNSN”).

Nano-arrays centered on the human body require the use of nano-antennas that operate in the terahertz band, these being the same type as those found in the Covid injection samples, Mik Andersen wrote.

Andersen’s article is in-depth and well referenced research comparing an article by researchers at the University of Warwick (2017) and images obtained by Dr. Campra from Covid “vaccine” samples.

“The explicit mention of the type of antenna and the technology of intra-body nano-networks, would confirm that vaccines are, among other things, vectors for the installation of nanotechnology, or nanodevices in the human body. However, beyond pure coincidence, the authors make explicit the use of graphene and carbon nanotubes, as necessary elements for this network model.”

La Quinta Columna’s Delgado explains who Andersen is and briefly discusses Andersen’s article, “we’re going to see a brief overview of what intra-body networks are. Now we’re going to talk about nanotechnology. Specifically, about what the elite is trying to do. It’s the future or the purpose of this operation, where Elon Musk is an important piece,” he said.

The image discussed in the video above is slide 8 of a 24-slide presentation. On Orwell City’s website, HERE, you can find a pdf document of the 24 slides, ‘Intra-body nano-network – Brief summary by Mik Andersen’, with easy-to-understand diagrams and bullet points. The document can be either viewed online or downloaded.

The final two slides show illustrations of how the components within the body will communicate with the outside world.  Firstly, at the micro-level (slide 23) and then at the macro-level (slide 24, below) and how the human body becomes a part of the Internet of Things.