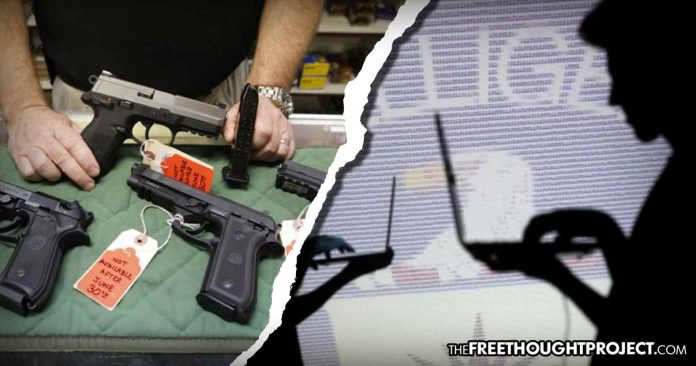 By Matt Agorist
In one of the most Orwellian bills to date, lawmakers in New York have drafted and proposed a bill that will require a review of a citizens social media as well as their search engine history, going back years—just to buy a gun.
Senate Bill 9191 would establish an official investigation officer who would scour the social media posts and search engine history of anyone attempting to purchase a gun. It also applies to current gun owners who want to renew their licenses.

New gun legislation proposes that anyone who wants to buy a firearm would need to submit their social media profiles and search history for review before buying a gun.

According to the bill, when a person attempts to purchase a gun, an investigating officer would then be given the password to the gun buyer’s social media accounts. The officer would go back three years on Facebook, Snapchat, Twitter and Instagram.

The officer would scour the gun buyer’s search engine history from Google, Yahoo, and Bing. The ominous text of the bill lays out this Orwellian process clearly.

IN ORDER TO ASCERTAIN WHETHER ANY SOCIAL MEDIA ACCOUNT OR SEARCH ENGINE HISTORY OF AN APPLICANT PRESENTS ANY GOOD CAUSE FOR THE DENIAL OF A LICENSE, THE INVESTIGATING OFFICER SHALL, AFTER OBTAINING THE APPLICANT’S CONSENT PURSUANT TO SUBDIVISION THREE OF THIS SECTION, AND OBTAINING ANY LOG-IN NAME, PASSWORD OR OTHER MEANS FOR ACCESSING A PERSONAL ACCOUNT, SERVICE, OR ELECTRONIC COMMUNICATIONS DEVICE NECESSARY TO REVIEW SUCH APPLICANT’S SOCIAL MEDIA ACCOUNTS AND SEARCH ENGINE HISTORY, REVIEW AN APPLICANT’S SOCIAL MEDIA ACCOUNTS FOR THE PREVIOUS THREE YEARS AND SEARCH ENGINE HISTORY FOR THE PREVIOUS YEAR AND INVESTIGATE AN APPLICANT’S POSTS OR SEARCHES RELATED TO (I) COMMONLY KNOWN PROFANE SLURS OR BIASED LANGUAGE USED TO DESCRIBE THE RACE, COLOR, NATIONAL ORIGIN, ANCESTRY, GENDER, RELIGION, RELIGIOUS PRACTICE, AGE, DISABILITY OR SEXUAL ORIENTATION OF A PERSON; (II) THREATENING THE HEALTH OR SAFETY OF ANOTHER PERSON; (III) AN ACT OF TERRORISM; OR (IV) ANY OTHER ISSUE DEEMED NECESSARY BY THE INVESTIGATING OFFICER. FOR THE PURPOSES OF THIS SUBDIVISION, “SOCIAL MEDIA ACCOUNTS” SHALL ONLY INCLUDE FACEBOOK, SNAPCHAT, TWITTER AND INSTAGRAM, AND “SEARCH ENGINE” SHALL ONLY INCLUDE GOOGLE, YAHOO AND BING. Upon completion of the investigation, the police authority shall report the results to the licensing officer without unnecessary delay.

Notice how the bill mentions “biased language” toward race, color, national origin, ancestry, gender, religion, age, sexual orientation and disability. While it is certainly repugnant to degrade or verbally attack someone based on these traits, as long as it is not violent in tone, then it is protected speech.

The fact that the government is seeking to limit someone’s ability to protect themselves, based on what they may perceive as hateful speech is a slippery slope indeed. One need only look at the vast swaths of content on social media that is misconstrued as hate speech on a regular basis to realize the implications of this bill.

Criticizing police for killing people or speaking out against corrupt government officials could be included in this vague definition which would subsequently remove someone’s Second Amendment rights.

What’s more, if someone makes a threat of violence on social media, they are already committing a crime. If this crime is reported, there is no need for police to go back and search the accounts of people who’ve never done so.

While it may seem like a well-intentioned idea to prevent outspoken racists from buying a firearm, this bill, like all similar bills, could eventually be used to disarm entirely peaceful, well-meaning individuals.

There is even a specific Supreme Court precedent going against the proposed law, attorney Sheldon Boyce pointed out to WIVB.

“In the case of Heller vs District of Columbia in 2008, the US Supreme Court held that the possession of a hand gun in the home is a fundamental constitutional right so anything that infringes upon that right is subject to challenge,” Boyce told Buffalo’s WIVB.

State Sen. Kevin Parker proposed the bill on Nov. 14. The measure is currently in the Senate’s Rules Committee.