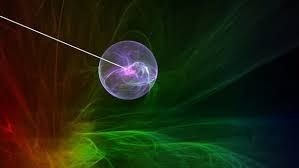 In my new book I suggest that “reality” is an “hallucination” created by a former of super-simulation program running on a very advanced quantum computer. In the last chapter of “Opening The Doors of Perception” I discuss in detail how a virtual reality simulation working directly with the sensory areas of our consciousness could create a virtual reality so real that we would be totally emersed in it and we would believe it was totally real. Indeed I suggest that there is no objective “reality” outside the simulation in the same way that there is no “objective time” nor any “luminiferous ether” whereby an ultimate objective reference frame for speed exists… everything is relative to each subjective frame of reference. Could it be that “perception” is similarly relative and each perceptual reference frame is similarly “real”? For this to work their must be a process of quantum computing that will allow the processing power to run such a simulation. This has been the major criticism of the “simulation argument.” However latest discoveries regarding a new form of electromagnetic energy may allow hypothetical quantum computing to have the processing power needed to run such a universe-sized
VR program … check out this article:

“The results of this research will have a huge impact on the way we conceive light” (Credit: Colin Jeffrey/New Atlas)

The fascinating properties of light and its electromagnetic partner electricity have been the focus for a great deal of physics research over the centuries. So, with all these years of study, it could be expected that there may not be much left to learn about these two phenomena. But now researchers at Imperial College London have surprised everyone with research suggesting that binding light to a single electron could result in a new type of light that boasts the properties of both.

The research involves the use of topological insulators, which are materials that act as electrical insulators internally, but are conductive externally, and allow electrons only to move along their surface, such as that used in the recent creation ofplexcitons. Imperial College researchers claim that it could be possible for a single electron to be coupled to photons so that, as the electron followed the surface of a topological insulator, so too would the light.

In other words, the light could, for example, be forced to follow the curvature of the surface via the movement of its attached electron, so that a form of physical energy itself would influence its travel. This would mean that light could be controlleddirectly by electricity to make it follow a circuit, or move in a direction that it normally would not follow.

“The results of this research will have a huge impact on the way we conceive light,” says Imperial’s Dr Vincenzo Giannini. “Topological insulators were only discovered in the last decade, but are already providing us with new phenomena to study and new ways to explore important concepts in physics.”

Using existing studies by Imperial researchers on nanoparticle topilogical insulator spheres less than 10 nanometers (about half the width of a human hair) in diameter, the researchers created models that not only showed that light would take on some of the properties of an electron orbiting the nanoparticle, but that the electron would similarly adopt many of the aspects of the light with which it was integrated.

As such, where electrons may normally stop flowing in a circuit when confronted with a conductor defect, the team realized that the light connection would help the electron flow past the imperfection in a way never before thought possible. The potential of this behavior could be exploited in the likes of future photonic computers, which could be made much more reliable, less vulnerable to disruption, and largely inured to physical defects in their circuits.

At present, any evidence of this phenomenon working would be unobservable in any practical way due to the quantum-scale realm in which it occurs. However, Dr Giannini and his team are collaborating with experimental physicists to help produce a practical demonstration of their model, and believe that the actions that would help to create this new form of light could be brought up to a scale where they may be scrutinized at room temperature.

Combined with other recent research into new forms of light, this work may help make one more step forward to realizing practical photonic-based quantum computers created from light-based electronic circuits.

The results of the research will be published today in the journal Nature Communications.