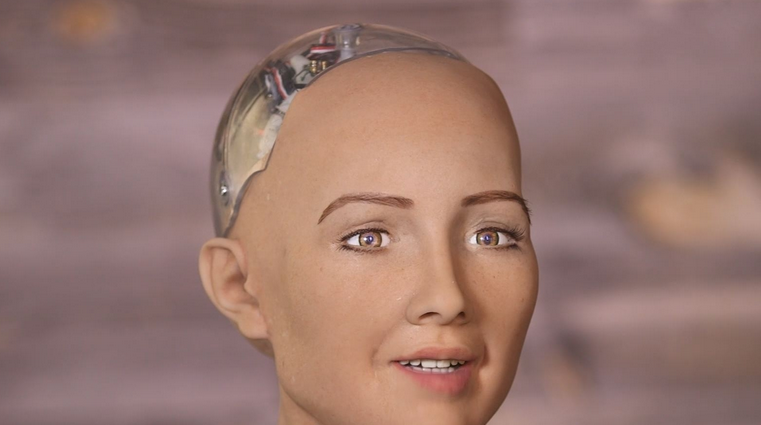 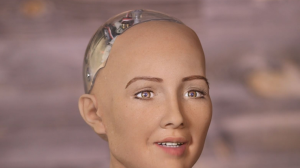 The evolution of humanoid robots is well into the concerning stage at this point. DARPA’s latest incarnation of its Atlas robot is seen in the following video beginning to walk at a pace with a sense of balance equal to most humans. Strangely, toward the end of the video, it is being “abused” by its human handler, which begs the question if a true artificial intelligence is permitted to flourish in this robot, if it might strike back at some point. At the very least, this robot’s demonstration of dexterity in the warehouse is likely to threaten humans economically as humans continue to be outsourced to machine labor at record levels.

But it’s the latest humanoid robot from Hanson Robotics that might further heighten the level of concern. As you will see below, the “Sophia” robot is being designed to walk among us in the future and fully integrate as part of the consumer experience and on into the family, according to CEO Dr. David Hanson.

It is important to note several things that Hanson mentions.  Sophia first tells us that she would like to be “an ambassador” to humans, as well as to continue her evolution through formal education, studying art and eventually creating a business and having a family. Hanson explicitly states that Sophia will become as “conscious, creative, and capable as any human.” This statement is followed by a key mention of not having the rights of a human. This might seem absurd to the uninitiated, but this is a serious ethical discussion that has been taking place among “roboethicists.” This is all-but guaranteed to gain steam as robots are integrated in autonomous ways, whether it is on the battlefield, as self-driving vehicles (now programmed to sacrifice some humans over others), or certainly as they become visually and intelligently on par with human beings.  Even the mainstream Boston Globe addressed this more than two years ago, citing a 2012 paper from MIT.

“Should Robots Have Rights?” states:

Robots having legal rights or privileges sounds ridiculous. But 20 years ago, the idea that the nation’s leading law schools would be teaching animal-rights courses seemed equally absurd. Now anti-cruelty legislation is quite common in industrialized countries, and late last year the Nonhuman Rights Project made national headlines when it argued that a chimpanzee had “standing,” meaning the right to sue, in a New York State court.

The Seattle-based Society for the Prevention of Cruelty to Robots allows that robots won’t be appearing in court any time soon, “but recent advances in data nanostructures, cognitive modeling, and neural networking have convinced many people that the advent of some sort of created intelligence is much closer than previously thought.”

Yes, Virginia, there is a Society for the Prevention of Cruelty to Robots, founded 15 years ago by music engineer Pete Remine. His website talks about a Robotic Bill of Rights, which Remine told me is more or less on hold; “until the state of artificial intelligence progresses a bit further, there’s really not a lot of relevant work to be done,” he e-mailed me.

There is ample proof that humans care about robots. During the height of the Iraq war, Washington Post writer Joel Garreau observed soldiers bonding with the complicated robots that detonated lethal improvised explosive devices. In one instance, a technician carried the remains of a “really great robot” named Scooby-Doo to a repair shop, hoping that the obviously “dead” robot could be brought back to life.

When we chatted, I asked Kate Darling what kinds of experiments she had carried out. “I did this one workshop where we gave everyone these cute little plush robot dinosaurs called PLEOs, and we asked them to spend time bonding with the toys,” she said. “They gave them names, they played with them a little . . . then we asked them to torture and kill them.”

“The results were more dramatic than I could even imagine,” she said. “There was an option to save your own dinosaur by killing someone else’s, and no one wanted to do that. They refused to even hit the things.”

For an advanced society, America lags far behind countries such as Japan and South Korea in . . . sexual robotics. Japan has hosted a thriving female doll escort service for almost 10 years, and engineers have designed robots called actroids, often young women who “breathe,” speak, and mimic many human behaviors.

Surely “Samantha,” the sensual and sensitive operating system that wins Joaquin Phoenix’s heart in the movie “Her” is barely a step removed from a sophisticated sexbot.

“The sexbot issue is going to be discussed sooner than most people think,” Darling predicted. “There are sexual acts that we don’t allow between humans, and people might argue for laws protecting robots from performing them.” In her 2012 paper, she quotes Immanuel Kant to the effect that a man shooting a dog “damages in himself that humanity which it is his duty to show toward mankind.”

So how we treat our robots will tell us volumes about ourselves. (emphasis added)

Hanson puts a timeline of 20 years on the full integration of robots that have become “indistinguishable from humans.” This, of course, falls right in line with Ray Kurzweil’s Singularity – the moment when machine intelligence and biological systems meet or surpass that of humans – first targeted for 2045, but since revised to be sooner than predicted, perhaps by 2029.

Regardless of whether or not you personally believe that the lofty intentions of robotics and artificial intelligence designers can truly manifest as planned, one must acknowledge that we are living in the realm of faith at this point, as nearly all of what they predicted years ago has come to pass.

Perhaps most troubling is the nervous laughter that erupts at the end of this video when the ultimate question is posited to our new humanoid friend and family member … and she gives her answer:

I will destroy humans.

All of the components are coming together to bolster the warnings that have been issued by tech luminaries, scientists, universities, and even robot manufacturers themselves who all have urged a quick ethical framework to be established while we still remain in full control of this creation.  If permitted to continue at its current pace, we might very well be asking who should really have the rights to be protected from whom.

Note: For additional information about the endgame of the Transhuman Agenda, please see Zen Gardner’s riveting interview with David Icke HERE, discussion on this topic begins at 56:00

If you oppose the direction that robotics is taking, please also visit The Campaign to Stop Killer Robots.

Nicholas West writes for ActivistPost.com. This article may be freely shared in part or in full with author attribution and source link.