The Excelsior Pass in New York is the first-of-its-kind vaccination passport that people will be required to have if they want to attend any large-scale events or entertainment venues, so if you thought this was about the COVID virus, you would be quite mistaken.

This is about the global tracking system surrounding the COVID virus which will not be going away even after the virus does. Now, about that name ‘Excelsior’ Pass.

“For such an high priest became us, who is holy, harmless, undefiled, separate from sinners, and made higher than the heavens;.” Hebrews 7:26 (KJB) 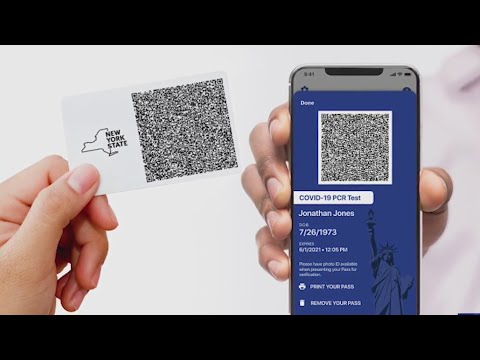 Excelsior makes its earliest appearance in England’s written record in 1538, as part of a sermon that had been recited in Latin for Henry VIII by the Bishop of Lincoln John Longland (1473-1547), and then published under the title, “A Sermonde Made Before The Kynge His Maiestye At Grenewiche, Vpon Good Frydaye.” It contains a quote from Hebrews 7:26.

From that point on, the word ‘excelsior’ appeared in common usage as ‘excelsior coelis’ which was used to mean ‘higher than Heaven’.

“For thou hast said in thine heart, I will ascend into heaven, I will exalt my throne above the stars of God: I will sit also upon the mount of the congregation, in the sides of the north: I will ascend above the heights of the clouds; I will be like the most High. Yet thou shalt be brought down to hell, to the sides of the pit.” Isaiah 14:13-15 (KJB)

Interestingly, it is Lucifer in Isaiah 14 who says that he will ascend up higher and that he will ‘exalt my throne above the stars of God’.

New York calling their brand-new vaccination passport the excelsior, a prototype of the Mark of the Beast, only serves to reinforce my decision to never, ever take the vaccine or receive a vaccine passport, excelsior or otherwise.

This is only the beginning, and as more states start rolling out the vaccine passports, the connection to the Mark of the Beast and the coming Antichrist will become ever more apparent.