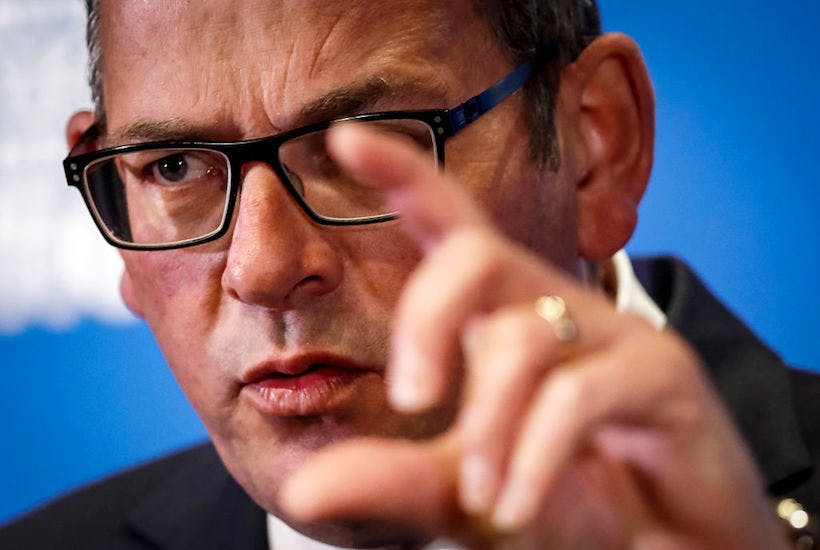 If the Victorian dictator had only been given proper dictatorial powers — rather than the half-arsed democratic powers prescribed by the constitution or whatever the hell that sissy document is called – his state would not have recorded any Covid-19 cases at all.

You can’t expect Dictator Dan to fight a pandemic with one iron fist tied behind his totalitarian back.

The Victorian Parliament must pass the Public Health and Wellbeing bill, introduced to the Legislative Assembly yesterday, if Andrews is to have a fighting chance of fighting everyone under the cover of fighting Covid.

The bill is certain to be opposed by so-called ‘lovers of freedom’ who will argue that Andrews doesn’t need more power when he has already subjected Victorians to the world’s longest lockdown.

But was it really a lockdown?

While it is true that citizens were issued with stay-at-home orders for 262 days, they were not literally locked down. Andrews needs the power to physically barricade people in their homes, welding shut front doors if necessary. It’s the very least a tyrant could be expected to do.

Still other Covid-loving human rights worriers will point to government-mandated curfews as evidence the Victorian strongman already has too much authority.

And yes, Andrews did order people off the streets between 9pm and 5am earlier this year. But what sort of mickey-mouse curfew is it when police enforcing that curfew don’t have the power to shoot citizens on sight?

Speaking of shooting, police must be free to use real bullets rather than the rubbery ones they’ve been peppering citizens with lately. Bruises are for losers. If Chairman Dan is to be taken seriously by his comrades in the Chinese Communist Party, he needs to be able to impose health and safety with actual bullets. Everyone knows you’ve got to crack a few eggs to make an omelette. Commander Dan must be given that power.

It should be obvious to everyone by now that the only reason Victoria’s Covid case numbers keep rising is that Dan Andrews has lacked the authority to do what must be done.

It’s not enough for #istandwithdan to be trending on Twitter. Victorians will only be safe when #danstandsoverus has gone viral.

During the past two years Victorian police — under Andrews’ watchful eye — have been able to pepper spray, beat and kick citizens for not wearing masks. And yet, after all these things that Dear Leader has done for them, people still want to stroll in the open air, feeling the warmth of the sun on their uncovered faces.

The Eternal Lord of all the Beasts of the Earth and Fishes of the Sea has tried coaxing recalcitrant Victorians with carrots. Now, reluctantly, he must wield his statist stick.

Authorities have closed children’s playgrounds, cordoning them off with police tape, and yet small children still ride their bikes through parks, laughing playfully, as if it is their God-given right. Covid-denying, anti-vax, Murdoch press reading, far-right conspiracy theorists. All of them.

And their parents too.

Such open defiance of the Supreme Leader cannot be allowed to continue.

That’s why harsh penalties set out in the Public Health and Wellbeing bill must be adopted. If people won’t comply with the Dear Leader’s directions, they should be subject to lengthy jail terms or crippling fines — preferably both — as set out in the new legislation. Sometimes you must be cruel to be kind. Ask any dictator.

If anything, the bill should go further than imposing two-year jail terms and $90,000 fines on people who defy health orders. The Victorian General, Great and Triumphant, should have the power to disappear people, much like he has already disappeared his unvaccinated political opponents from state parliament and cartoonist Michael Leunig from The Age.

“No jab, no job” has been good — to a point — but it does not go far enough. The legislation before parliament, modelled on best practice from China and New Zealand (but I repeat myself) rightly asserts “no obey, no exist”.

You can be sure that the Beloved Leader’s opponents will go on Sky News to cry about human rights violations and the death of democracy and other figments of their culture war-obsessed imaginations. In doing so they will only serve to prove their feeble mindedness and show that they do not have what it takes to lead the Glorious State of Victoria.

They will complain loudly that Daniel Andrews can already restrict citizens’ movements, ban gatherings, shut down businesses, cancel weddings, close churches and rope off playgrounds in the event of a pandemic. They will foolishly insist that he should not have power to destroy people’s lives without even a single case of a specific disease, as the new legislation proposes.

They do not understand that only when Despot Dan can decide to shut down the entire state on a whim will he have the power required to keep Victorians drained and dispirited so that he can tweet that he’s their daddy and that he’s bloody proud of them.

We are safe because Dan is strong. This legislation makes him stronger than ever, which means Victorians are safter than ever.

I urge the Victorian Parliament to pass the Public Health and Wellbeing bill without delay. Long may Dan stand over us.