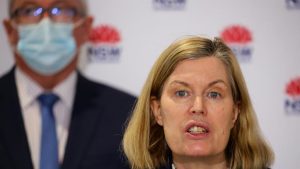 Do you have the proof? Photo: TAA

NSW Health Minister, Brad Hazzard, has clashed with politicians during an appearance before an inquiry looking into the state government’s handling of the pandemic.

NSW Health Minister Brad Hazzard has snugged Greens and Labor MPs over a question about advice that was provided to the state government on locking down Sydney.

During a parliamentary inquiry yesterday, Hazzard butted heads with committee members as he and Dr Chant were questioned over the management of the state’s COVID-19 lockdown.

The committee first asked Dr Chant to provide the precise date she first gave Mr Hazzard advice about locking down Greater Sydney. This was not provided.

Dr Chant said the ‘formal advice’ to lock down the region was given in writing to the NSW crisis cabinet on June 25, the same day stay-at-home orders were announced.

Then, when asked to publicly provide the documents that underpin this advice, Brad Hazzard — not allowing Chant to speak — refuses to release them:

“I’ll answer that, because obviously those issues go to crisis cabinet, which is a subcommittee of cabinet. But Dr Chant is under oath, and she’s giving you the evidence, which is quite clear, so she won’t be providing any documents,” Hazzard said.

These issues (documents) go to cabinet and won’t be provided?

So, we are just left with stories as ‘evidence’?

That tells you everything you need to know, ladies and gentlemen.

They wanted to see actual documents, as opposed to the regurgitated narrative at press conferences.

Earlier, Labor’s Penny Sharpe asked Dr Chant: “When was the advice prepared for lockdown, when did that start and more importantly on what date specifically was the advice first provided to the Health Minister on locking down?”.

But Hazzard stepped in to answer the question, responding, “It’s not that easy Ms Sharpe”.

“I know you haven’t been the Health Minister, but when you’re in the middle of a COVID crisis, I spend pretty well every day here in the Health building and we discuss these issues,” he said.

No date could be provided.

No numbers, no documents.

‘Just trust us, we’re explaining it to you. No need for evidence’.

Are you starting to realise this isn’t about ‘protecting health’?

This footage was captured at a parliamentary inquiry, which you can watch here.

The inquiry is looking into the origins of the latest outbreak, the handling of restriction and lockdown measures and how the pandemic will be managed going forward.

It follows calls throughout the week for Hazzard and Chant to appear for questions.

Public pressure put them in this position, where they were forced to sidestep the questions.

Many across the country are growing thin of the unaccountable medical ‘experts’ that now have the ultimate say over the lives and well-being of free Australians. See below: 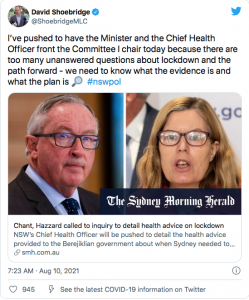 The Premier has continuously reiterated that the NSW government acted on “health advice” provided by Dr Chant and her team, but Mr Hazzard’s answers on Tuesday contradict that.

Dr Chant conceded a party at West Hoxton in Western Sydney — described by the Premier as a “super spreader” event — was the catalyst for the decision.

But when tasked to provide the actual documented data that this is based on?

Nothing can be produced.

Just like the FAKE story of ‘coronavirus-tainted sewerage’ data that shut down regional Victoria.

Just like legal bureaucrats that won’t call anyone to stand in fear of having to prove their measures.

There is no data. There never was any data.

It is all part of the hoax game.

People are beginning to realise that the ‘experts’ are working on behalf of a different agenda.

Mass scale population control, disguised under the means of ‘safety’ and ‘security’.

They are also realising this entire corona narrative is built on falsehoods.

Just like most grand narratives we have ever been fed by the establishment.

What do you think of these comments by Hazzard?