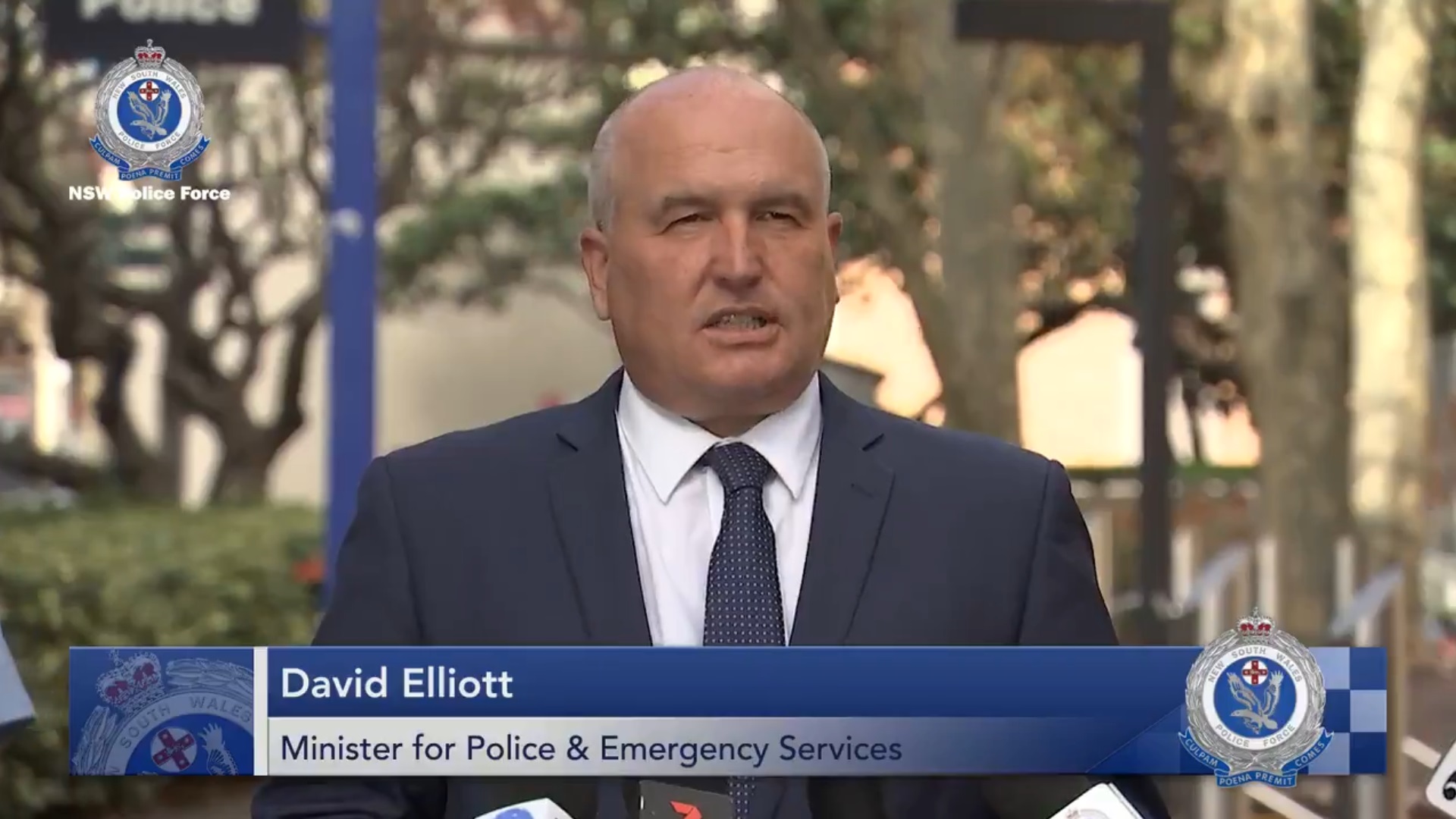 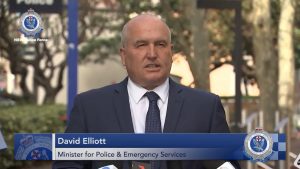 “If you know someone who attends an illegal gathering this weekend, you must call crime stoppers.”

There is another Freedom Rally planned this weekend to protest against lockdowns and other health measures, such as vaccine passports and mandated vaccination – all of which are claimed to be a violation of Australia’s Constitution. 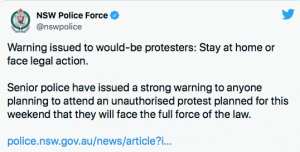 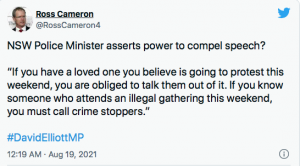 Too afraid to organise the event openly on social media, Australians have been using encrypted message apps such as Telegram to join the global protest against Covid restrictions.

Police have become aware of these arrangements and warned that protesters will face huge fines and potential jail time if they exercise their Constitutionally protected right to peaceful political communication.

Currently, Covid orders issued under the Biosecurity Act allow police to suspend the ordinary rights of citizens in the interest of public health.

“To anybody planning to breach public health orders and attend an illegal mass gathering this weekend, our message is clear – don’t do it. We cannot underestimate how dangerous [sic] you will be putting the NSW community into. It’s no coincidence, in my mind, that three weeks ago when we had a similar gathering that has not been a contribution to the fact that we now have an increased number of cases,” said David Elliott, Minister for Police and Emergency Services.

While Elliott tried to blame the previous Freedom Day protest for Covid case numbers, there has been no evidence to support his observation released by either the police or the NSW Health Department.

According to health experts, most cases are linked to spreading within the family homes of tight-knit communities or via the state’s official hotspot locations such as Bunnings, Coles, and Woolworths – all of which remain open.

“In these public health orders is not a restriction of speech – it’s a restriction of movement,” continued Elliott. “You can still protest. If you want to protest against the government, go online, start a petition, join social media, ring talkback radio, write a letter to the editor of the newspaper. There are plenty of ways for you to express your emotions right now without putting people’s lives at risk.”

Elliott has forgotten that foreign-owned social media companies heavily restrict free speech online, routinely banning anyone who speaks out against official health measures or voices an opinion that they perceive as dangerous. In the world of social media, ‘dangerous’ can mean anything that deviates from official Covid guidelines.

With no right of association, no right to freedom of speech – Australians have found themselves separated from their family and friends of months, with many singles living in what equates to solitary confinement.

“Police have previously indicated that we’re not opposed to free speech,” said Deputy Commissioner Mal Lanyon. “We are absolutely opposed to a protest that potentially jeopardises the freedom of vast majority of the community who continue to do the right thing.”

The NSW community has been threatened with ruinous fines between $3,000 and $5,000 for minor violations of Covid health orders. After enduring more than 18 months of heavy restrictions, lengthy lockdowns, and an absence of international tourism – very few ordinary Australians are willing to risk fines to express their opposition to Covid mandates.

“Police in monitoring that information [family and friends reporting potential protesters] have planned a significant police response for this Saturday. There will be in excess of 1,000 police officers available. That will consist of specialist resources as well as general duties police and we’ll be very flexible. Can I say to those people who may be considering coming – rethink that idea,” added Lanyon.

Australia has become a battleground between ‘public health’ and ‘civil rights’.

While the press refer to Freedom Day protesters as ‘conspiracy theorists’ and ‘anti-vaxxers’, online surveys and those interviewed at the rallies across the country show that the majority are simply Australians desperate to go back to their lives as they watch the rest of the world live with Covid.

“If the protesters decide to come into the city with the intent of protesting and hurting hard working police officers then I hope that they are arrested with undue haste, they are bail removed and spend the night in a cold cell before appearing in court the next day,” said Shadow Police Minister Walt Secord.

2 thoughts on “NSW Police Minister: You must report family and friends who attend freedom rally”