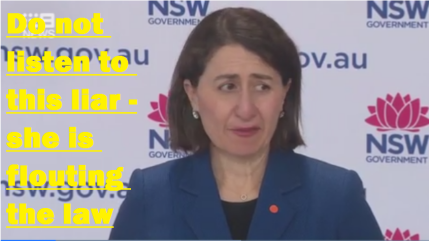 Gladys Berejiklian and her regime are lying and bluffing when they say they can mandate vaccines. The law does not permit them to do so on many levels.

AUSTRALIA’S power-crazed, corrupt and off the rails political elite is driving the country into hell and now they want to take the churches with them by dividing vaccinated believers from unvaccinated believers and making them have separate services.

This hare-brained scheme of Gladys Berijiklian and her fascist regime (they no long deserve the title ‘government’) is pure bluff. It has no basis in law and is almost certain to fail in the courts if they have not fallen prey to the globalist cabal.

It will also generate massive opposition in the churches – let alone all the footy fans they want to stop going to games if they don’t get jabs and show their vaccine passport. And then there’s all the other “unclean” they want to lock out of restaurants, theatres and public transport. Already, some 2800 church leaders representing every denomination across the country have signed the Ezekiel Declaration, a statement opposing vaccine passports.

But Berejiklian and company are so blind, deranged and entangled in the global pharma vaccine cabal’s desperate grab for power, they apparently can’t even see the political danger of pushing this agenda. Politically Berejiklian and her NSW Coalition are finished. And so is Labor who are complicit in the madness.

Australia’s Constitution Section 116 underlines a basic principle of the free nation states, that people should be free to practice their religion without interference by the state and without the state forcing religious belief. In the US Constitution freedom of speech and religion is stated in the First Amendment of the Bill of Rights. Australia’s Section 116 states:

This should apply to the states also, but they notoriously flout it, such as the Andrews regime in Victoria which has already criminalized the act of prayer for anyone who has issues to do with their sexual identity – even a family member. They define it as “conversion therapy”. For Andrews dividing the Christians into vaccinated and non-vaccinated and forcing them into separate services will be just another job for his thousands of Gestapo corporate cop enforcers.

“All restrictions, mask wearing, lockdowns, and vaccinations are unlawful and cannot be enacted. The only thing is threats and fines to trick you to comply. All fines are dismissed when referred to the courts. You do not have to do anything.”

But there is some hope on the horizon if our court system somehow manages to uphold the rule of law and has not fallen prey to globalist operatives. The Federal Court case in Sydney continues this week with churches seeking equitable treatment in being open as an essential service.

Palmer United leader Craig Kelly and AFL Solicitors of Sydney are also running a case against the NSW Health Minister Hazzard and Chief Medical Officer Chant in the NSW Supreme Court. They seek to obtain a ruling to declare vaccine mandates unlawful and in breach of the Australian Constitution section 51(xxiiiA), the Nuremberg Code of which Australia upheld after WWII and is a signatory, the International Covenant on Civil and Political Rights as well as other federal and state laws including the Federal Biosecurity Act which makes any coercion or compulsion of any medical procedure unlawful including expressly “vaccines” without freely given informed consent.

Kelly and Tony Nikolic of AFL Solicitors note the following major points in law: “1. First thing to remember is that at law in Australia, any so-called vaccine mandate is all lies, smoke and mirrors as there is no lawful authority whatsoever in this country to impose a vaccine mandate on the people collectively or any human person individually without a Court order after they have attended in court in person and had a chance to defend themself and oppose any such order, which a judge can only lawfully approve if they are proven to be without legal capacity (that is mentally incompetent to be exercise legal capacity).

2. “It is unlawful and impossible to mandate the vaccine on you or your children by any government agency, representative or individual, or by any employer or by any school – so calm down and take a deep breath.

3. “State Governments carefully use words and misconstrue facts to make it sound like it’s mandatory but it is not and your employer or school principal has no legal grounds to make it mandatory. They are trying to force you to voluntarily take the vaccine, Scomo has even said, its your choice and their is no liability because you chose it.

4. “Schools acted preemptively to send out letters implying, some even stating the vaccine was mandatory for children, when it is not. Forcing children and parents to volunteer to take the jab. School principals seeking to impose vaccine mandates are guilty of crimes against humanity, the Australian Constitutuon, the Federal Crimes Act 1914 (Cth), the Privacy Amendment Act 2020 (Cth), the Bio-Security Act 2015 (Cth) and the Nuremburg code.

“The advice from Craig and Tony (Nikolic) is to simply self advocate, claim and uphold your Constitutional rights and Do Not Comply. Your employer or school principal might think the gov is forcing them but they are not, what is the Government going to do if the principal says no?

“All restrictions, mask wearing, lockdowns, and vaccinations are unlawful and cannot be enacted. The only thing is threats and fines to trick you to comply. All fines are dismissed when referred to the courts. You do not have to do anything.

“Nothing, as any vaccine mandate is unlawful, so they need to calm down too. Your best way to get community support is to educate your students and parents of the dangers of the vaccinations. Stop supporting unlawful restrictions on your constitutionally protected liberties in your workplace and classrooms, find out the actual facts and stop spreading covid propaganda.

“If your principals persist go AFL solicitors website page, as you can actually charge the principal with harrassment and battery. You can’t lose your job, they can’t threaten you. Your best bet is to share truth and knowledge.”

Further information is available from the Concerned Lawyers Network (also on Telegram), AFL Lawyers Francina, Leonard & Associates (AFL) Lawyers Sydney, also on Telegram. AFL solicitors state they are fighting for human rights and against discrimination. “You have rights. Basic human rights. They need to be protected.”

Anyone who has been discriminated against is invited to submit a complaint to Human Rights Advocates, also on Telegram.