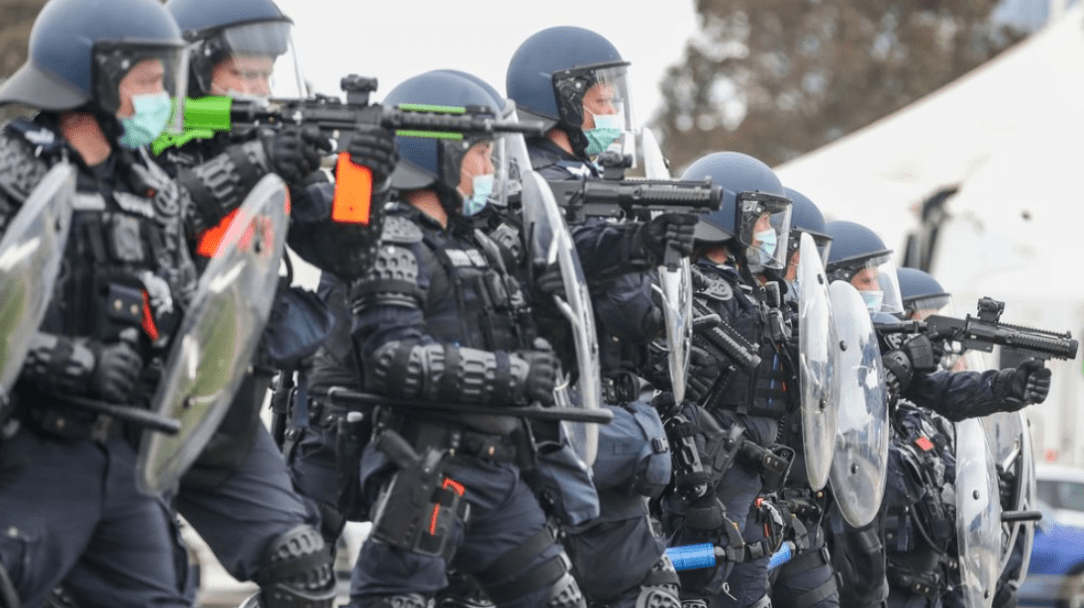 As an Aussie expatriate from Melbourne, I’d hear frequent jokes about Victoria Premier Dan Andrews and his obsession with lockdowns. Mostly because Andrews has had six of them. But lately, no one is finding the humor in them anymore. After watching a live-streamed protest held at the Shrine of Remembrance in Melbourne, I saw why.

That particular protest consisted of construction workers, trade union members, and the general public decrying the excessive vaccination mandates/lockdown lunacy. It’s been compounded by the state of emergency the premier announced in March 2021 that was later extended nine months until NYE. Live-streaming coverage conducted by Melbourne independent media via Real Rukshan and Rebel News has been invaluable for showing the unbiased truth. The Shrine of Remembrance protest, and others that occurred during that week, showed a collective representation of the public, who had reached their limit. Their grievances had enormous validity, and the subsequent actions by the Victoria Police were excessive, and unnecessary. That’s not including the rubber bullets they fired.

The Shrine of Remembrance incident was also reported by mainstream media outlets and, not surprisingly, only condemned the actions of the protesters. This was lumped in with lazy generalizations like “anti-vaxxer protesters” or the sensationalism of “far-right violence.” After all, according to the elites within government (and the willingness of the gaslighting media who used to enjoy eagerly pointing out police brutalities), the only road to COVID-19 free salvation is through the COVID vaccination. Anyone that dares question or resists that directive is ripe for retribution, retaliation, and ridicule.

This incident highlighted the disintegration of civil rights, individual freedoms, and the livelihoods of many that have occurred under Premier Dan Andrews in the state of Victoria. They stand as a disgrace to humanity, that a free society that we all thought thrived in Australia has now ceased. The justifications provided by Premier Andrews were based on the typical COVID excuses we’ve heard before. “We need to stop the spread” or “If we all do this, then everything will go back to normal.” The Victoria public did as they were asked, and suddenly, the Andrews government has become intolerant toward anyone who dares question its decision-making process.

After six lockdowns (with possibly more to come), the lockdown method is starting to resemble a Ponzi scheme. Much like any Ponzi scheme, it eventually gets caught out. For Andrews state elitists, however, borrowed time can be created, and in this case, it can be forced. What you’re witnessing now in the state of Victoria is the fight to stave off any discovery of the elitists’ farce. This view of Australia is what the world is also seeing via viral videos. That of Dan Andrews and Gladys Berejiklian’s (the premier of New South Wales) very own Draconian anomaly. These videos have demonstrated a world where individuals can’t remove their masks to even breathe the air. To peacefully assemble without the onslaught of rubber bullets. Or the mere act of walking outside without the fear of being jumped upon by a hoard of police. That’s not even touching upon the Andrews/Berejiklian press conferences, providing proclamations so astonishing, they make fellow “lockdown advocate” Gov. Gavin Newsom look like the governor of Florida.

Thanks to Andrews, the livelihoods for millions are now ruined. Squandered to save the premier’s political career, sacrificed to become a flimsy backdrop for justifying a lockdown policy that achieved none of its original intent. From a historical perspective, the state of Victoria has become a  crossbreed of Tulipmania and Cult of the Supreme Being. The world can easily see through the façade. This is not about stopping the spread of COVID anymore.

Whomever sells the promise of life only returning to normal if we “all get the jab” lives in a fantasy world. This doesn’t matter to the Dan Andrews or Gladys Berejiklian elites who continually saber rattle Australians with this nonsense. They have less in common with epidemiology and more with a father holding a rifle toward the groom at a shotgun wedding.

We need to face the reality, and remind ourselves, that the COVID vaccination is not the magic bullet, nor a cure from COVID-19. There are still those who have been vaccinated that were still infected. The original purpose of the vaccine was to assist us in overcoming COVID infection. Inevitably, treatment options, the ones elites endlessly ridicule, will be necessary to overcome COVID infection.

Recently, I messaged a friend from Melbourne, and the subject of where I now live came up. “Texas,” I said. “Texas looks like heaven from here,” my friend replied. As an expatriate, halfway around the world, I now understand why my former hometown of Melbourne has been forever changed. It’s been replaced by a nation held hostage by its own government. It also has a compliant media, cheering on these antics forcing the populi into accepting their descent into serfdom.

Victoria and New South Wales now serve as a warning to the rest of the world. Your freedoms can evaporate, and it’s not just limited to rogue nations anymore.

I left Australia in November 2004 and moved to the United States. I’ve often been asked if I ever would return to Australia. My answer has always been “I can always go back to Australia, but America is my current home.” In light of the recent actions in Melbourne, I’m seriously considering renouncing my own Australian citizenship in protest. Why? Because Australia is no longer the home it once was, and Texas is indeed heaven compared to the Melbourne lockdown state right now.