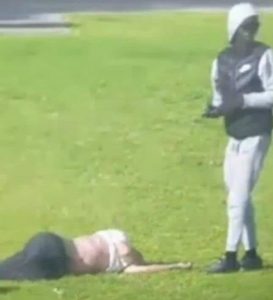 Welcome to Daniel Andrew’s Victoria Where it’s Kill Whitey
Derryn Hinch’s Justice Party
This is truly sick. Not just because a partially-blind grandfather was set upon, beaten up and robbed by a gang of African youths. But also because of the way the courts then assaulted him again with piss weak sentences for his cowardly attackers.
The young marauding thugs stomped on and kicked the 63-year-old in a Melbourne park in the middle of the day. They stole his mobile phone and his shoes. What the hell have we become? The longest sentence was two years.
A 16-year-old boy was convicted of assault but given a ‘youth attendance order’, meaning no time behind bars. Another 16-year-old boy was sentenced to six months in jail but with time served was released in January. Ramzy Mohammedali, 20, was given eight months, while 18-year-old Amanniwal Nyieker was jailed for two years.
Victims of Crime Commissioner Fiona McCormack said the sentences were a slap in the face to the victims. ‘I think they feel really betrayed and I think it would impact on their sense of safety. Such serious violent crimes need to be taken really seriously by the system.’
Gangs have been blamed for robberies, aggravated burglaries, serious assaults, car thefts and home invasions across greater Melbourne and beyond for years. In my mind, it all went apeshit when then Police Commissioner, Christine Nixon, instructed police not to call them ‘gangs’. They are. Most of them are African. And they must be hit hard with jail terms reflecting the severity of the crimes. Stop the pussy-footing.
Note: The Andrew’s Government created this mess so they need to clean it up and start shipping these mongrels out of Australia with zero chance of return. Also, any family members who are connected to these filthy criminals should also be sent packing back to Africa with the Australian Government footing the bill not taxpayers.