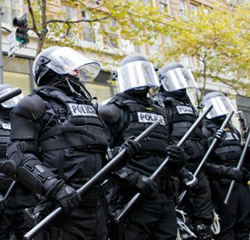 SIGN HERE: I am calling for the immediate demotion and investigation of several officers in attendance at Sydney Parliament, where a woman and her child were unlawfully harassed, kidnapped and violated with no jurisdiction.

Disgusting display from a bunch of criminal thugs but will enough Australians wake up in time to see this? We can clearly see that this has nothing to do with some fake virus and everything to do with the implementation of a Draconian police state.

The Peaceful protest against lockdown laws was finishing up and this gentleman ( i believe one of the organizers) was reading out a simple message about what his father once told him. Halfway through the thugs came from everywhere to arrest him violently.

Surrey Hills police were responsible for this rubbish here is a link. Find out their names sue them in a civil court start taking their possessions see how they like it. https://www.change.org/p/governor-att…

The Stazi Police in Australia have been kidnapping, bashing, chasing, thieving, stealing, and committing terrorism upon the people of Australia under the name of a fake government & fraud laws.

Time to wake up Australia push back, the Law is on your side they are the criminals not you, just as the criminals in The Soviet Union or elswhere in history, just because they have a badge & black uniform does not mean they represent the law in fact the opposite is true in Australia & has been for a long time now.

It is only being made obvious to everyone now the velvet glove has come off & the Foreign Corporation “Australian Government” & its subsidiaries Foreign Corporate “States” are moving in for the kill, & you, our Country our Children & Assets are their PREY…

They have had this planned for a long time & these Goons are brainwashed enough & stupid enough to do it. Get out & protest & stand up for your lawful right to do so. Put the FEAR OF CHRIST UP THEM. Backup Channel: https://www.bitchute.com/channel/liab… Get the real ANZAC Australian Flag here. https://www.ausyflags.com.au/product/… https://communismbythebackdoor.tv TO BUY THE ORIGINAL CONSTITUTION Wayne Glew 24 Hagan Road Glenfield Geraldton WA 6532 $150 plus postage $20 Free Download of Original Constitution https://www.foundingdocs.gov.au/resou…

One thought on “Peaceful Melbourne Protester Arrested, For NO Reason, By Violent Police State Thugs”