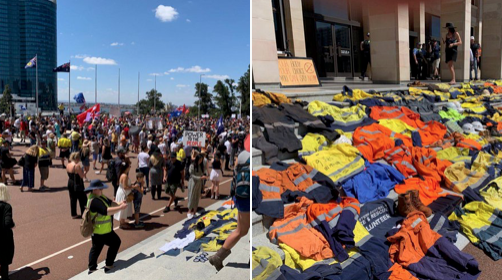 As “D-Day” arrives, workers from a variety of industries lay their uniforms down on the steps of Parliament in Perth.

Powerful scenes on the steps of Parliament House in Perth this afternoon, as workers lay down their uniforms to protest impending mandates across the state.

Authorities say workers must receive their first dose by tomorrow or face unemployment, as mandates affect 75% of WA’s workforce.

Demonstrators gathered outside Parliament House on this afternoon, opposed to the WA government’s introduction of vaccine mandates.

Despite the looming uncertainty, the spirit of Australia remained high:

December 1 is being called ‘D-Day’ — the day when workers across a wide range of industries must have had their first dose of a COVID vaccine in order to keep their jobs.

Protesters laid hi-vis FIFO vests and hard hats on the steps of Parliament and held placards with slogans such as “no to medical mandates” and “coercion is not consent”.

“These directions cause harm and suffering,” she said.

“These directions violate the constitution.”

Other industries whose workers must be fully vaccinated by December 31 include port, transport and freight workers, health and aged care staff, fire and emergency services employees, abattoir and meat processing workers, and prison staff.

Staff at supermarkets, groceries, restaurants, pubs and cafes, as well as childcare, public transport and construction workers must be fully vaccinated by January 31.

Representatives from many of these industries appeared at Wednesday’s protests, with one placard reading, “Fire and rescue say no to medical mandates”.

As the event carried on, protesters let the corporate media know they were NOT impressed with their continued distorted coverage of the alternative viewpoint across Australia.

Here is a POV perspective from one of the journalists in question:

Mass coercion and segregation continues across Australia and shows no sign of slowing down with the ‘arrival’ of Omicron on our shores ahead of 2022.

One thing is for certain, the people are standing firm in their fundamental right to choose.