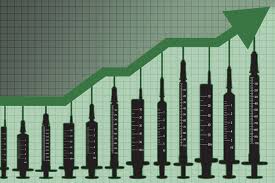 It seems like only yesterday that Perth-based Meningitis Centre was at the center of a scandal concerning its ties to pharmaceutical interests.

In 2003, The Age reported about the dubious link between Wyeth Pharmaceuticals and the Meningitis Centre, a “supposedly independent health group”, after the pharma giant had funded a Meningitis Centre campaign to have Prevenar subsidized by the federal government for all children.

International drug company Wyeth is helping to fund a lobbying campaign by a supposedly independent health group to get the Federal Government to introduce universal immunisation against pneumococcal disease.

Wyeth produces the only pneumococcal vaccine approved for use in young children in Australia.

The national Free Pneumo campaign is being publicly run by the not-for-profit support group, The Meningitis Centre.

But the group’s chairman Bruce Langoulant, told The Age that Wyeth had paid for public relation’s company Porter Novelli to help with the campaign.

This included arranging a publicity stunt earlier this month, when about 12 parents of child victims of pneumococcal disease flew to Canberra to call for a broad immunisation program.

Mr Langoulant said Wyeth paid for air fares for the group to fly from Sydney. “Wyeth chipped in for the air fares… It was a good opportunity to get to Canberra.”

A media release on Meningitis Centre letterhead was distributed by Porter Novelli to publicise the event.

Wyeth’s role in funding the trip, or paying for Porter Novelli’s services, was not disclosed.

The Meningitis Centre, which is based in Perth, receives about 30 per cent of its funding from Wyeth.

Mr Langoulant refused to say how much this was, but added the group did not receive “hundreds of thousands of dollars”.

According to the centre’s website, it receives an unconditional educational grant from Wyeth “to conduct a wide range of public-awareness activities”.

He defended the centre’s decision to accept help from Wyeth with running the campaign. “I have no qualms about the fact that if I can get some help and get us the right result and there happens to be one bloke in benefit, well good luck to him,” he said.

Wyeth’s director of corporate affairs, Rachel David, said the company did not provide funding specifically to the Meningitis Centre to run campaigns.

However, she said it was “obviously one of our goals” to ensure that the Government fully fund pneumococcal immunisation, as recommended by the Australian Technical Advisory Group on Immunisation.

“If they (the Meningitis Centre) consider it is appropriate, we do pay for air fares and other things, so that they can take their message forward.

“But we don’t stipulate what that message needs to be. We leave that up to them,” Dr David said.

While Wyeth paid for Porter Novelli to help with the Free Pneumo campaign, the company was not directly involved in running the campaign.

“We are not in control of what they (Porter Novelli) may or may not say to an organisation like the Meningitis Centre,” Dr David said.

The Australian Medical Association has estimated it would cost about $27 million in the first year to immunise all children.

The vaccine, called Prevenar, is available privately at a cost of about $450 per child. Wyeth has made more than an estimated $US1 billion ($A1.35 billion) in worldwide sales since it was introduced in 2000.

What a difference 15 years make.  An article like that simply would not be published today.  The fourth estate is dead in Australia.  All mainstream media journalists in Australia, including ‘Our ABC’ journalists, are now marketing agents of the vaccine manufacturers.

Cathy O’Leary is one such journalist who regularly promotes vaccine interests.  She famously wrote about her adult son’s heroic battle with Whooping Cough (she really did).   She has been working hard to whip up as much fear as possible about Meningococcal Disease, in a bid to garner public support for subsidisation of the ACWY vaccine under the National Immunisation Program (NIP).  A Google search reveals a long list of articles she has written about Meningococcal Disease over the last twelve months or so.

Meningococcal Disease is not a public health issue

During 2017, only 381 cases were reported to the National Notifiable Diseases Surveillance System.  This compares with 353 cases in 1991.

Based on a population of 24 million, this equates to a 0.0016% chance of developing the disease.

In addition, the disease is not considered to be highly transmissible, raising obvious questions about why public health is involved in promoting the vaccination of millions of Australians in the first place.

Constitutional factors specific to affected individuals should be the focus of medical research, because it is obviously those factors which determine if a person develops the disease, not carriage of the bacteria claimed to be the cause of the disease.

Up until recently, Pfizer was listed as a sponsor on Meningitis Centre’s website; so recent in fact, that the page can still be viewed in webcache.

This is how the sponsors page appears now.

The Meningitis Centre has been an active member organisation of the Confederation of Meningitis Organisations (COMO) since 2004.

COMO lists GlaxoSmithKline and Pfizer as its sponsors.

Pfizer has applied for NIP listing of its Meningococcal ACWY vaccine

In March 2018, the Pharmaceutical Benefits Advisory Committee (PBAC) will consider two applications by Pfizer to have its Meningococcal ACWY vaccine (Nimenrix) listed on the NIP.

1. To request listing on the National Immunisation Program (NIP) for the active immunisation of infants.

2. To request listing on the National Immunisation Program (NIP) for the immunisation of adolescents in Year 10 and a catch-up program for adolescents aged up to 19 years administered via a school or GP-based catch up program.

1. The Australian Technical Advisory Group on Immunisation (ATAGI) appoints a disease-specific ‘Working Party‘ to develop strategies to expand vaccination coverage to as many segments of the population as possible.

Pharma-sponsored patient organisations like the Meningitis Centre also contribute faces of the disease.  Chairman of the Meningitis Centre, Bruce Langoulant claimsthat “he and his family have successfully lobbied for the introduction of several meningitis vaccines on to the National Immunisation Plan including Hib, Meningococcal C and Pneumococcal”.

It would appear that the states take turns in being the first state to implement a time-limited program, with all other states following soon after; all the while concealing from the general public that the programs had been planned all along.  As was reported recently, WA Health’s 2015 time-limited pregnancy vaccine program was planned before Riley Hughes died, yet he was used as the face of one of the nastiest orchestrated campaigns ever seen in Australia.

The most appalling part of these time-limited vaccination programs is that vaccine recipients are often enrolled in studies without their knowledge, and which are being undertaken to generate evidence to support future applications to the PBAC for subsidisation of the vaccine under the National Immunisation Program.

The research – which is being carried out by the National Centre for Immunisation Research and Surveillance at Westmead using data linked by the CHeReL – is required to provide direct evidence of a protective benefit from ‘cocooning’ and to provide an estimate of the size of the benefit.

The results are of direct interest to the NSW Ministry of Health, as part of their evaluation of ‘cocooning’. The results are also expected to inform national immunisation policy decisions on pertussis control by the Australian Government. If found to be effective, this vaccination strategy may be considered for adoption as a long-term measure for population pertussis control, with the possibility of public funding under the National Immunisation Program. (page 1)

As readers would know, cocooning vaccines are still recommended by ATAGI, even though the pregnancy vaccine was implemented on the basis cocooning does not work.  To this end, the Pertussis Working Party achieved a twofer for the manufacturers.

3. State Health Ministers call for the vaccine to be subsidised federally.

4. Vaccine manufacturers submit applications for subsidisation to the PBAC and ATAGI supports the application.

In some cases, there is overt political interference in PBAC decisions, (PBAC is supposedly independent), as we saw back in 2006 when then Prime Minister John Howard intervened to have Gardasil approved for subsidisation.

Current federal Health Minister, Greg Hunt has “given an undertaking that a quad-vaccine which covers A, C, Y and W strains will soon be free“, even though the PBAC has not yet considered whether these vaccines meet the committee’s effectiveness, safety, and cost-effectiveness criteria.

The current Meningococcal campaign is slightly different from previous campaigns in that there are two types of vaccines which manufacturers are seeking to have subsidised under the National Immunisation Program.

1. Bexsero Meningococcal B (GlaxoSmithKline): The PBAC has refused subsidisation on no less than three occasions.  Bexsero was previously owned by Novartis, which funded earlier orchestrated campaigns for another “supposedly independent health group”, Meningococcal Australia.

The possibility of Bexsero being subsidised under the National Immunisation Program in the future received a boost in December 2016 when it was announced by then South Australian Health Minister, Jack Snelling that the University of Adelaide, in partnership with SA Health would conduct a Bexsero study on behalf of GlaxoSmithKline.  Not coincidentally, Jack Snelling is the brother of PBAC member Tom Snelling.

At least vaccine program participants know they are part of a study in this instance.

2. Meningococcal ACWY (Nimenrix by Pfizer, Menveo by GlaxoSmithKline, Menactra by Sanofi-Aventis): The time-limited ACWY vaccine programs kicked off in January 2017, when Western Australia took the lead.

By the end of 2017, all states and territories had followed.

This could not be a coincidence.