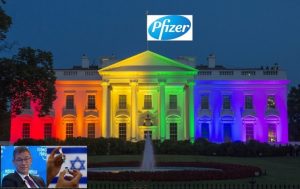 Is there any more doubt that the COVID-19 plandemic, which was used to transfer America’s wealth to Big Pharma with literally TRILLIONS of taxpayer funds transferred into their accounts, has now allowed Pfizer to have complete control of the country by buying the White House and President of the United States?

It began with fellow billionaire Donald Trump, of course, in 2020 who strong-armed the FDA into giving fast-track emergency use authorization to Pfizer’s COVID-19 vaccine. (This is from our Bitchute channel.)

Then Biden was installed as President and kept the coffers full, and now that 80% of Americans have already received a COVID-19 vaccine and demand is waning, with 98 million doses of Pfizer’s vaccine currently sitting unused due to lack of demand, the call was put in to Joe this week to keep the faucet running, and the White House obliged and pledged another $9 BILLION for 300 million more doses of the deadly COVID-19 shots.

Trump and Biden might disagree on a lot of things, but Pfizer COVID-19 vaccines ain’t one of them. (This is also on our Bitchute channel.)

The top three firms who hold the most stock in Pfizer are Vanguard, Blackrock, and State Street (source), and there probably are very few investment firms who do NOT own some Pfizer stock, so when you see officials with the FDA, CDC, and others promoting Pfizer COVID-19 vaccines, they are probably all shareholders and cashing in, as are most members of Congress (unfortunately, these records at opensecrets.org only go through 2018; it would be interesting to see from 2020 and later.)

Of course we’ve known for a long time that Pfizer owns most of the corporate media:

And they are the largest criminal organization in the world, based on settled criminal cases with the Department of Justice.

The pharma giant is already shattering profit records, and is expected to generate well over $100 billion in 2022 revenue.

by Jordan Schachtel
The Dossier

Pfizer is already swimming in record profits, but that hasn’t stopped the drug company from gouging the American taxpayer for every last dollar.

On Wednesday, the Biden Administration signed off on a new vaccine supply deal with Pfizer for $3.2 billion for 105 million COVID injections, but that’s only for the first batch of mRNA shots. The contract will generate well over $9 billion for Pfizer, as this latest purchase agreement tops off at 300 million doses. Compared to previous settlements with Pfizer, this public-private no-bid arrangement will come at a much higher cost to the U.S. taxpayer.

The Biden Administration has justified the deal by claiming that it needs to restock supply to prepare for seasonal spikes. The data does not support such a claim. According to the CDC, almost 100 million taxpayer-funded Pfizer shots (and 169 million total shots) have gone unused, resulting in billions of dollars in waste.

The new arrangement allows for the Biden Administration to buy Pfizer’s authorization-pending COVID injections, which the company claims is reformulated for newer variants.

However, even the new formulation is already outdated. It was designed and trialed for an Omicron subvariant (BA.1) that was popular last Winter, but no longer exists in circulation, potentially rendering it just as useless as the Wuhan strain shot. The deal includes the infant and toddler formulations, which are based on the non-existent Wuhan strain.

None of the shots for this deal will be supplied under an FDA approved label. Instead, they will be distributed under emergency use authorization (EUA). Pfizer has never deployed its FDA-approved vaccine in the United States. The company recently acknowledged that it never intends on producing its original FDA approved vaccines.

The price hike conflicts with the probability that Pfizer’s costs are likely much lower than they were with the original purchase order. The infant and child shots have a fraction of the active agreement as the adult supply, and each vial stores more doses . Moreover, Pfizer has added an ingredient to the formula that allows for a significant shelf life extension, making the logistics much more cost effective.

Pfizer’s margins were already through the roof prior to the Wednesday announcement.

Pfizer’s May earnings report showed that the company logged a record breaking $26 billion in Q1 sales, marking a quarterly profit of $7.86 billion. Revenue was up 77% from 2021, while profit was up 61%. Now absorb these 2022 numbers in the context of Pfizer’s 2021 revenue outperforming its 2020 revenue by 95%.

Before the new vaccine purchase order, Pfizer was already on track to bring in over $100 billion in revenue and $32 billion in net income this year. In financial statements, the company has acknowledged that it has transformed itself into a COVID-19-driven business. All of its new income is coming from the American taxpayer and other government “customers” via their taxpayers, who have virtually no say in the matter.