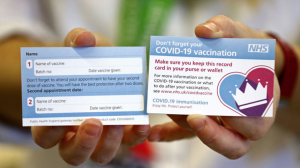 Reports indicate that the UK National Health Service is to issue everyone vaccinated against coronavirus with an ‘immunisation identity card’, with the government refusing to rule out that the cards will be used like passports to reintegrate into society.

The rollout of vaccinations begins in the UK this week, and photos of record cards reveal wording on them reading “Make sure you keep this record card in your purse or wallet“.

The card has a space for the name and batch number of the vaccine, as well as the date that it was injected. A second space denotes the fact that Pfizer’s shot requires two vaccinations.

Is Snopes covering for Pfizer when the first round of vaccines that include a fertility shut down affects woman nationwide?

There is confusion, however, over whether this photo is representative of the actual ‘ID card’ that people will be given after vaccination, or if it is just an appointment card.

Many have expressed concerns that the cards are evidence that the government is moving toward effectively mandating vaccination.

It is expected that the actual ‘COVID passport’ will be issued via the government’s ‘track and trace’ app.

Previous reports suggested that the British government is developing a system to provide COVID vaccinated people with QR codes on their phones, which they would present to get into sports events, concerts and other large gatherings.

The British government’s announcement comes after the independent Welshgovernment announced that people who take the COVID vaccine will get immunisation ID cards.

In the US, similar ‘record cards’ were unveiled last week.