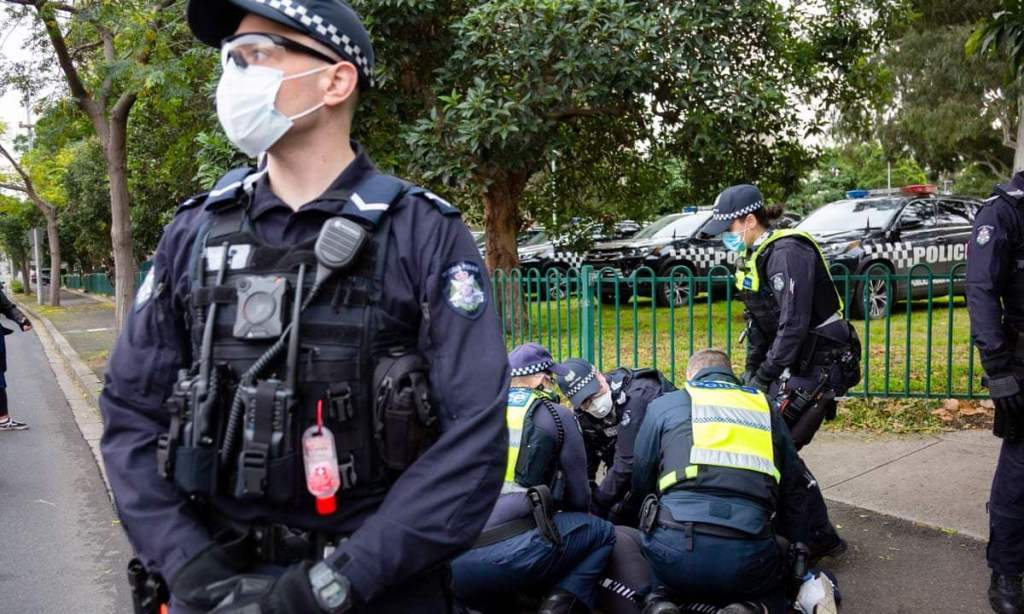 Two men accused of planning an anti-lockdown protest in Melbourne have had their homes raided and been arrested.

The move follows a vow by police to crack down on the protest, planned in Melbourne’s CBD today, calling it a “blatant breach” of COVID-19 restrictions.

Organisers of an anti-mask rally planned for Melbourne’s CBD today have been arrested prior to the event.

According to reports, officers have seized phones and a computer, charging a 41-year-old Mooroolbark man with ‘incitement’. A 41-year-old Chirnside Park man will also be charged.

The Facebook event, now removed, called on people to protest in opposition to Melbourne’s six-week shutdownand claimed to be a broader movement of planned protests.

“Let’s blow this one up and fill up the streets to show these criminals we won’t give up our country and livelihoods without a fight,” the description of the event read.

By late Thursday, it had more than 100 confirmed attendees and 400 expressions of interest.

“This is a completely blatant breach of the chief health officer’s directions and puts Victorian lives at risk,” police said.

Police reported nearly 200 people being fined in the first two days of restrictions, including 43 people fined for breaching curfew and 51 fined for not wearing a mask.

Premier Daniel Andrews said the harsh restrictions were the “only way” the state would drive down cases, capping off the most concerning week of COVID-19 news since the pandemic began.

Victoria Police have warned they will not hesitate to hand out $1652 on-the-spot fines or arrest others who try to attend the event today. We are waiting on further developments.

A clear message is being sent to all those who defy the rules of the international scientific cult.

The current raids come after police vowed a crackdown on a planned protest in Melbourne on Sunday, following a previous rally at the Shrine of Remembrance on July 31.

As coronavirus restrictions increase and informed citizens in Melbourne continue to film themselves arguing against draconian laws, the mainstream media is ramping up their assault against the public.

You all would have seen it by now: ‘Anti-maskers’ are becoming the new ‘anti-vaxxers’; two terms created by the state, like the term ‘conspiracy theorist’, in an attempt to discredit any opposition.

Let’s appropriately change that to: ‘Civil liberty campaigners are becoming the new pro-choice advocates’. There, that’s much more accurate.

Beginning with the story of Eve Black, the media have been slamming anyone who is trying to make legal arguments during confrontations with businesses and authorities.

A new poll has shown that more than half of Australians surveyed believe police should have the power to fine those who spread COVID-19 conspiracy theories.

Police are also labelling those who intentionally breach Melbourne’s COVID-19 restrictions as “selfish and childish”for putting others at risk.

Associate Professor Beck from the University of Melbourne recently told SBS News as infections soar in Melbourne, “these ideas can have dangerous consequences”.

We are seeing the beginning of citizen targeting not witnessed since 20th century totalitarian regimes, all under the false guise of ‘security’ and ‘protection’. A new-age Trojan Horse.

The media does not serve the interests of the people. The government is a false WWE theatre designed to distract attention and divide opinion. All while the control structure is subtly built.

It is a profound experience to be documenting the biggest transformation in recorded human history. Typing away for years, witnessing the puzzle connecting in front of our eyes.

The stage has been set for a technocratic transition of unprecedented proportions. Even someone that believes ‘everything is fine’ and the ‘government loves you’, cannot deny the potential for a future tyrant to take advantage of the tools already designed for their ‘protection’.

Let’s take a look at some of the pieces of the puzzle, specifically relating to the plandemic timeline:

Now, organisers of protests are having their homes raided.

Do you not see where this is heading, ladies and gentlemen?

This is just the beginning. New-age terrorists, or free thinkers, will first be defined by physical actions, such as not wearing a mask and travelling outside of your ‘zone’. Next, the battle will move inside of your head, in an approaching era of thoughtcrime. This is why they collect so much data.

How long before they are kicking down your door for being a ‘public health threat’?

As previously argued during the Ebola scare, propaganda is so well ingrained in the public psyche that they will openly cheer you on as you are dragged from your home — even when you have no ‘virus’.

How long before a ‘social credit system’ is brought in to ‘maintain order’ and put all of these ‘appalling conspiracy theorists’ in their place?

Whenever they roll out the vaccine, presumably. Not only will this be used as a one-way ticket to the Epsilon classof the Brave New World Order, but also to target the ‘undesirables’ in society. Free thinkers must worry about the latter before the first can be fixed.

The NPC masses are not here to help you. In fact, they are being trained against you. They are much further along in the chemical and spiritual alteration process, incapable of critical thought and analysis.

The longer you spend focusing your energy on these poor souls (which we love and will still fight for), instead of preparing, building and connecting with like-minded individuals, the larger the obstacle will be that you are creating for yourself. Are you coming with us or not?

Make yourself familiar with The Emperor’s New Clothes, if you haven’t already.

We can see that the emperor has no clothes. The masses cannot see this.