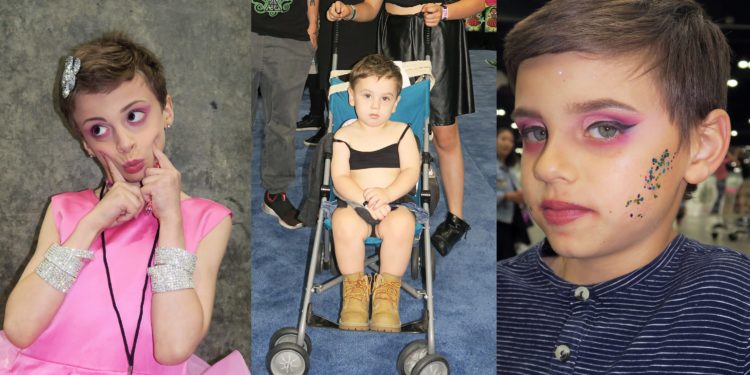 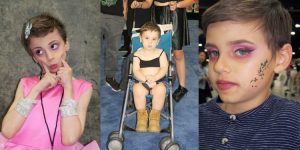 ONE OF the signs that the pervert-aligned and Jewish-controlled media have successfully moved the Overton Window to an almost unimaginable extent is the phenomenon of “Drag Kids,” which features children in heavily sexualized performances in heavily sexualized settings, dressed in drag, dancing provocatively. Some performances have included adult men throwing dollar bills at a 11-year-old boy as he danced — and this young boy first appeared in a drag music video when he was six-years-old.

Despite limited backlash, the growing promotion and media-staged normalization of taking children to so-called ‘Pride’ and the non-stop smut provided by Netflix, TV, and Hollywood seem to have inured much of the adult population to behavior that would otherwise have been considered unacceptable without questions. Here, for example, is how the Canadian Press covered the “theatrical world of pre-teen drag queens” and a film celebrating such sickness (produced and directed by a certain Megan Wennberg):

TORONTO — The dance music is thumping, the audience is giddy and 10-year-old drag artist Queen Lactatia is sashaying up and down a makeshift catwalk in a shimmering metallic dress. The enthusiastic crowd hoots in approval as the diminutive style phenom weaves between tables at the all-ages brunch event, where the Montreal grade-schooler is followed by three more big-haired pre-teen performers, each in varying degrees of glitter, eyelash extensions and rainbow-hued attire.

The crowd falls silent for a rousing rendition of Lady Gaga’s hit “Shallow” by nine-year-old Laddy Gaga, who belts out the ballad with all the pained inflections of the original.

“I kind of feel like no one was prepared for that!” the show’s drag host, Miss Fluffy Souffle, decked out in a lilac wig and pink tutu.

“Were you like, ‘Oh, this is going to be cute.’ Yeah. And then all of our hearts literally exploded,” the seasoned Toronto performer declares as Laddy, a.k.a. Stephan Hirst of Spain, wobbles off in chunky heels.

Welcome to the world of drag kids, a burgeoning scene of wig-loving, sequin-covered, pint-sized showboats with all the gender-pushing attitude and sass of their adult counterparts. The over-the-top foursome who recently took over a bookstore/restaurant in Toronto’s gay village are the stars of the Canadian documentary film, “Drag Kids,” making its debut at the Canadian International Documentary Film Festival.

The film’s director, Megan Wennberg, says drag culture has become increasingly mainstream thanks to the reality series “RuPaul’s Drag Race” and YouTube videos that are exposing the culture well beyond adult-only bars and balls. She says it’s drawing kids who love to dress up and lip sync, and enjoy “being fabulous.” But it also taps into a deeper drive for some to define themselves in unconventional ways, even if it might be controversial.

“It’s an incredible outlet for self-expression, it’s really artistic, it’s really creative, it lets them explore different parts of themselves,” explains Wennberg, whose film is expected to air on CBC-TV after it completes a festival run. “They’ve all spoken about getting confidence and feeling powerful and just feeling more out there and more open. And also they’re giving a message to others that it’s OK to be different.”

Criticism can be harsh, she adds, noting that each drag kid has faced bullies, most notably Queen Lactatia, a.k.a. Nemis Melancon-Golden. Arguably the most famous of the bunch, critics have seized on a photo making the rounds online in which Lactatia is seen alongside nearly naked drag star Violet Chachki, a former “Drag Race” winner.

Melancon-Golden and his mother Jessica Melancon dismiss critics’ charges that drag is sexualizing the youngster, and explain away the photo by saying Violet was wearing a pubic wig — called a merkin — for an appearance at RuPaul’s DragCon NYC in 2017.

“She was in costume; he was in costume. It was a two-minute interaction,” says Jessica Melancon, dismissing the notion that nudity is always connected to sex and sexuality…If drag is about pushing boundaries, that means it should also be a welcoming space for kids, adds Bracken Hanke of Vancouver.

The only girl in the group, Hanke says she loves exaggerating female stereotypes as a “hyper Queen” — a female who does drag.

“Drag is super-duper fluid and there’s a lot to it, so I think that it shouldn’t just be limited to a certain group of people,” says the 12-year-old, whose long pink tresses drape down the back of a sheer dress and white body suit. “Drag is an expression that should be for everyone. And also I like to surprise people.”

Keep in mind while that this column is not referring to adults. It is referring to children. Specifically, pre-teen children. And if you have any doubt that what they are doing to these kids is heavily sexualized, take a look at the trailer for Wennberg’s new documentary Drag Kids, which is causing much buzz on the film circuit. Viewer discretion is heavily advised:

This is obviously evil, and it is obviously exploitation. Every previous generation would have recognized it as such. In fact, a very short time ago the sensibilities of the vast majority of North Americans would have been outraged and offended by pre-teen children being employed as cross-dressing, sensual dancers in heavily-sexualized atmospheres. Perhaps the vast majority is still offended — but cowed by Jewish dominance and a sense of powerlessness into silence. But behind that silence a rumble of thunder has begun.

As Jews exercise their power to push such outrageous abuse of our innocent children in White people’s faces, it cannot be long before that power is removed in a most dramatic and satisfying fashion.

Source: based on an article at The Bridgehead and National Vanguardcorrespondents