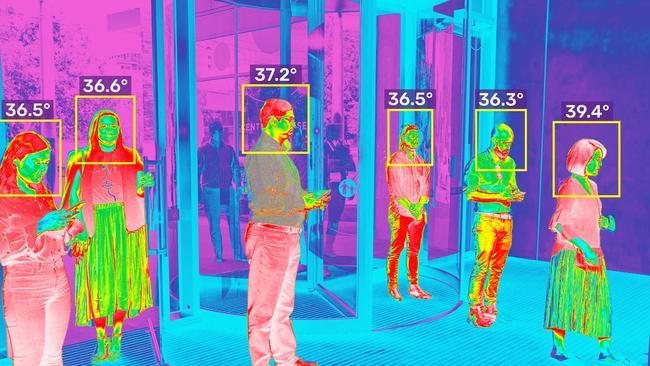 Sci-fi-like temperature checking hubs with “Predator vision” are being set up in Melbourne buildings determined to get workers back.

Sophisticated office management software will be paired with kiosks armed with temperature sensors and facial detection to keep staff away if scans indicate they are unwell.

Meanwhile prominent landlords including Charter Hall are looking to retrofit high-quality air filtration capable of catching particles as small as 7 nanometres, less than the size of SARS-CoV-2, backed by ionisation to kill bugs and viral particles.

Melbourne’s Unico has paired computer-controlled temperature check kiosks with its JourneyHub software, which aims to learn movement patterns and warn workers off bottlenecks with too many staff congregating in office spaces or lift wells.

The system is currently being rolled out at a 101 Moray Street, South Melbourne, site being developed by the Deague Group, along with two other sites. Other owners are discussing the tech.

A temperature scanning terminal at the 101 Moray Street building.Source:Supplied

Unico innovation and enterprise director Evan Harridge said they’d taken to referring to the temperature screening technology as “Predator vision” in a reference to the heat sensing alien technology in the movie of the same name.

“The system will recognise your face and know who you are, but it will allow you to be anonymous,” Mr Harridge said.

“It takes your temperature as you scan in. But it will forget you after you pass.

“The idea is to avoid a scenario where people are afraid to go back to work.”

If you fail you will be able to step aside and wait to see if you cool down, but after repeated failures it is envisaged security would intervene.

Those who do get in without passing the scan could have their swipe card deactivated to stop them moving about the building.