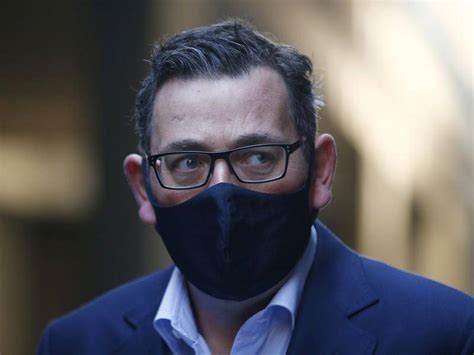 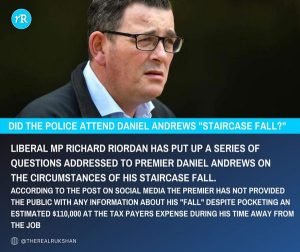 Cairns News sparked a burgeoning, national narrative about exiled Victorian Premier Dan Andrews after we published the scant details of his accident which led to his hospitalisation allegedly because he fell down the stairs.

A detailed description of his injuries published in the Melbourne Age immediately after his fall raised flags.

Cairns News smelled a rat and asked the opinion of one of its friendly medicos who also noticed an odour saying the injuries were entirely consistent with having been severely kicked while in a prone position, leaving injuries often seen after wild brawls.

We posed the question, ‘why would an assailant have kicked Dear Dan half to death’. Then after receiving emails allegedly from Labor insiders, we published details of an alleged sexual assault with Dan being the perpetrator.

Finally here is the answer sent to us allegedly by none other than former Victorian Labor Minister, branch stacker and voting fraudster extraordinaire, Adem Somyurek (left). It came from an encrypted email server.

“OFFICIAL: The person who bashed Daniel Andrews (and good on him for doing so) is
Luke Sayers. Luke is a former CEO of Price Waterhouse Coopers. Andrews got beaten
up for sexual assault on Luke’s daughter’s friend while at a high flyers party at the Portsea (Mornington Peninsula Victoria) mansion of Lyndsay Fox. Andrews is
currently in hiding in his parent’s farm in Mansfield. (Country Victoria). His wife
Kath has left him, his kids dont want to know him. The State and Federal Labor Party
will go into meltdown real soon when they are accused at both levels of politics for
trying to conceal the truth. They knew about this but didn’t want to get rid of the
“Favourite Son Of The Left”. Here comes an early election when the Governor dissolves
both the upper and lower houses of parliament. The Labor Party are now in a position
where they cannot govern with the confidence of the state.”

The Deputy Premier, James Merlino, says he has regular contact with Andrews, yet no legitimate photograph or footage of Andrews has been published anywhere in Australia since his alleged accident.

If the message from Adem Somyurek is real, then James Merlino (below) is a liar. He would know that Andrews has been hiding out at his parents’ Mansfield farm and for what reason.

Do you want to give us a statement James? The Facebook warriors have run this story and sooner or later the controlled, lying Victorian media will have to deal with it and so will you.

News.com.au has its two bobs worth:

“Victorian premier Daniel Andrews has broken his weeks-long silence to Victorians as they endure another week stuck in lockdown.

Mr Andrews, whose last public statement was in April, has been on sick leave as he undergoes rehabilitation from a serious fall down steps which left him with five broken ribs and a compressed vertebra fracture.

On Wednesday night, Mr Andrews said he wanted to “send a message” to Victorians after news the state’s “circuit breaker” lockdown has been extended.

The lockdown was originally set to end at 11.59pm on June 3, but now the tough restrictions will remain in place in Melbourne for another seven days.”

Labor Opposition Leader Anthony Albanese’s strident, stupid attacks on the Prime Minister about who knocked off a staffer in a parliamentary office will fade into insignificance when the Andrews’ story emerges in the compliant MSM.

The ALP leads the way in Australia with deviant sexual misconduct and Andrews puts the icing on the cake.